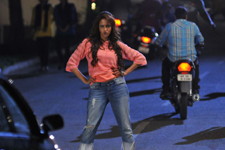 Ravi Kandala / fullhyd.com
EDITOR RATING
4.5
Performances
Script
Music/Soundtrack
Visuals
7.0
4.0
5.0
6.0
Suggestions
Can watch again
No
Good for kids
No
Good for dates
No
Wait to rent it
Yes
You know the kind of films where the actors seem to be having more fun than the audience? Where the writers seem to be the most insanely excited about the twists in the plot? Where the directors seem to have cried the most tears seeing the sentimental scenes being enacted? Where the comedians seem to be the ones cracking up the most at the jokes? And ultimately, where the audiences feel almost like party-poopers?

Welcome to Dongata. First, let's get the story out of the way. The film has Lakshmi Manchu playing an actress named Shruthi. We see her house with life-sized posters and paintings. We see a typical filmi mother named Jyothi Lakshmi (Pragathi) who talks like she's only concerned about her daughter's well-being, but in reality is only concerned about the money her daughter's making.

Shruthi's kidnapped, and her mother sheds buckets of tears. Shruthi, on the other hand, is having a gala time - beating up her kidnappers, eating and drinking with them, and singing songs about how men are in no way superior to women. The kidnappers, Venkat (Adivi Sesh), Vijji (Madhu Nandan) and Katam (Prabhakar), are meanwhile busy fooling Brahmi (Brahmanandam), Man on Fire, a private detective flown in from the US to handle this case, and also periodically calling Jyothi Lakshmi and tell her to arrange 10 crores if she wants to see her daughter again.

The first half thus passes off mostly quite peacefully with some comedy that is barely funny, and the aforementioned song. Then the second half begins, the flashbacks roll faster than snow in an avalanche, and you are buried under a heap of melodrama for absolutely no reason at all. The director suddenly betrays his love for Ekta Kapoor by squeezing every character for sentiment and making them shed enough tears to solve the water scarcity in the state. By the end of the second half, motives are revealed, characters are crossed and double-crossed, and the ransom ends up in the right hands.

Dongata is directed by a debutante, and the raw edges show. The desire to cram in everything from a crime drama to emotional scenes and social messages addressing a dozen societal ills is clearly a manifestation of the director trying to show off skills. Needless to say, all of that only spoils the flow of what starts off being a fun and light film.

Manchu Lakshmi plays the character in her usual style with her accented dialogue delivery and exaggerated expressions. She utters several content-heavy lines - and we're just not sure how much of the message will get across to the target audience. Adivi Sesh, Madhu Nandan and Prabhakar perform well along with Brahmanandam, Pragathi and Prudhvi, and give the film some good performances to boast of.

The production values are decent. The complete disdain for lip-sync however puzzles, and when actors like Brahmanandam can't get their lip-sync right, you wonder if the makers were vexed and decided to just wrap up the film and throw it out to the audiences. The music is about okay - and Lakshmi should just refrain from singing.

Dongata is a lazy summer afternoon flick - if you have nothing else to do, wouldn't mind some half-baked comedy and need the comfort of an AC theatre, head out for this one.
Share. Save. Connect.
Tweet
DONGATA SNAPSHOT 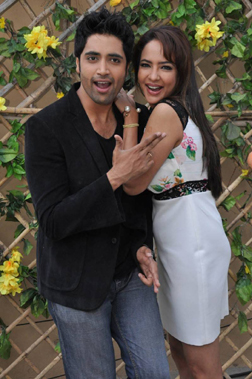 ADVERTISEMENT
This page was tagged for
Dongata telugu movie
Dongata reviews
release date
Manchu Lakshmi, Advi Sesh
theatres list
Follow @fullhyderabad
Follow fullhyd.com on
About Hyderabad
The Hyderabad Community
Improve fullhyd.com
More
Our Other Local Guides
Our other sites
© Copyright 1999-2009 LRR Technologies (Hyderabad), Pvt Ltd. All rights reserved. fullhyd, fullhyderabad, Welcome To The Neighbourhood are trademarks of LRR Technologies (Hyderabad) Pvt Ltd. The textual, graphic, audio and audiovisual material in this site is protected by copyright law. You may not copy, distribute, or use this material except as necessary for your personal, non-commercial use. Any trademarks are the properties of their respective owners. More on Hyderabad, India. Jobs in Hyderabad.