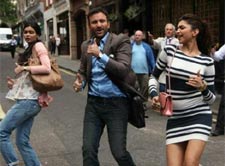 Nupur Barua / fullhyd.com
EDITOR RATING
6.0
Performances
Script
Music/Soundtrack
Visuals
7.0
5.0
6.0
7.0
Suggestions
Can watch again
No
Good for kids
No
Good for dates
Yes
Wait to rent it
No
The sorcerer of all love stories in the recent past, Imtiaz Ali, puts together a not-so-simple romance or two, a triangle, a foreign locale, circumstances requiring distinctive music and tailor-made lines for Saif Ali Khan and Deepika Padukone, and shakes it together to give us Cocktail, served by director Homi Adajania. The mix is heady, but too much of it can give you a headache, so be warned.

Gautam Kapoor (Saif Ali Khan) is a charmer, and women fall for his one-liners and quirky sense of humour. The only one who thwarts him is the very desi Meera (Diana Penty), a newly-married girl who has arrived in London to live with her husband Kunal (Randeep Hooda). Meera discovers that the marriage was a hoax, albeit legal, and she suddenly has nowhere to go.

Veronica (Deepika Padukone) is a party animal. Her parents shower her with "fat juicy cheques" on a regular basis, to compensate for their absence, and Veronica splurges it all in an attempt to buy loyalty, love and friendship. She meets a devastated Meera in the washroom of an eatery, and offers her a place to stay in. An unlikely friendship develops between the two lost girls, each one an extreme opposite of the other.

Veronica decides to teach Gautam a lesson for embarrassing her friend. In the process, the two get into an open relationship. The two girls and Gautam become best friends, and despite their individual personalities, spend a lot of time together.

Gautam's maternal uncle (Boman Irani) tells his Delhi-based, conservative sister Kavita (Dimple Kapadia) that her son is now serious about a girl and is living with her. Kavita arrives at the house in the middle of a fun-filled afternoon, and then things take a turn.

As far as stories go, Imtiaz Ali has done a pretty decent job. What he overdoes, however, is the needless drama. What could have been over and done with in 90 minutes stretches on to almost three hours. Or maybe Homi Adajania could have been less indulgent with the editing. The Being Cyrus director is otherwise flawless in his execution of the characters, especially those of Gautam and Kavita, having worked with both before. The humour is right there, but never goes overboard, barring a couple of sequences.

From a more contemporary point of view, it is somewhat unacceptable that the "characterless" hero should prefer the bland (therefore angelic) Meera to the fiery (therefore fast and loose) Veronica. You will find yourself rooting for Veronica despite her bitchiness. As with most Imtiaz Ali heroes, Gautam is undecided and confused, and unapologetic about it, but it is the stereotypical vamp-versus-virgin take that disappoints.

Saif Ali Khan is in his element in the movie. He gets the best lines, and his comic timing is impeccable. He does look slightly too old to be a young software engineer who manages to woo much younger women, but he makes up for it in his performance.

Deepika Padukone reprises her roles from Love Aaj Kal, Bachna Ae Haseeno and countless others where she drinks like a fish and parties like a hippie. However, this is her best portrayal of the bohemian woman, although she still cannot bring the required gravity to her character.

Diana Penty is stiff and uncomfortable, but this is her first major role, and she can only get better. As Meera, she is not somebody a man can fall in love with. Boman Irani is terrific in the few scenes that he has, but it is Dimple Kapadia who is the icing on the cake. She seems to be having a blast being Kavita.

The cinematography is not astounding, but the locales are. The production and costume designs are above average, and believable, but Diana Penty could have done with some better clothes. The music is loud, but there is no hint of plagiarism (a point that needs to be highlighted, given Pritam's reputation). Jugni and Tumhi Ho Bandhu stand out.

Cocktail is not a mushy romantic comedy, nor is it a tale badly told (although it could have been told within 90 minutes). Saif Ali Khan keeps you entertained enough to keep you in your seats, and his nickname Ghutlu (the source of inspiration for this name being this writer's brother) echoes in your ears long after you are done with the movie. Watch it if you are an Imtiaz Ali fan, and hope that Homi Adajania gets to direct a darker movie soon.
Share. Save. Connect.
Tweet
COCKTAIL (HINDI) SNAPSHOT 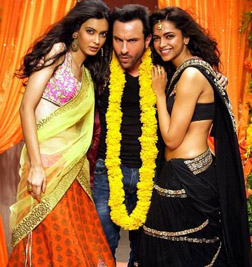 ADVERTISEMENT
This page was tagged for
Cocktail (Hindi) hindi movie
Cocktail (Hindi) reviews
release date
Saif Ali Khan, Deepika Padukone
theatres list
Follow @fullhyderabad
Follow fullhyd.com on
About Hyderabad
The Hyderabad Community
Improve fullhyd.com
More
Our Other Local Guides
Our other sites
© Copyright 1999-2009 LRR Technologies (Hyderabad), Pvt Ltd. All rights reserved. fullhyd, fullhyderabad, Welcome To The Neighbourhood are trademarks of LRR Technologies (Hyderabad) Pvt Ltd. The textual, graphic, audio and audiovisual material in this site is protected by copyright law. You may not copy, distribute, or use this material except as necessary for your personal, non-commercial use. Any trademarks are the properties of their respective owners. More on Hyderabad, India. Jobs in Hyderabad.