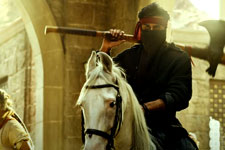 Punarvasu Pendse / fullhyd.com
EDITOR RATING
4.0
Performances
Script
Music/Soundtrack
Visuals
5.0
2.0
5.0
7.0
Suggestions
Can watch again
No
Good for kids
No
Good for dates
No
Wait for OTT
Yes
Shamshera is the kind of film that makes a reviewer think. Not with its writing - the plot is laughably simple - but with the effort that has been put into a film that is almost Thugs-of-Hindostan-level cringe.

Director Karan Malhotra, it seems, is still looking to recreate the magic of his debut film (a remake of the Amitabh Bachchan film of the same name) after the debacle that was Brothers (a remake of the American film Warrior). In his third film, Malhotra opts for a (mostly) original plot, a larger-than-life tale of a warrior tribe chieftain known as Shamshera.

Shamshera (Ranbir Kapoor) leads the notorious dacoit tribe known as the Khameran, a fiercely independent people who are considered to be a lower caste group and banished from the local towns of a fictitious area known as Kaza in north India. A deal negotiated by Shamshera with the British rulers for the tribe's freedom goes very wrong, as the Khameran become prisoners in the fort of Kaza, the personal fiefdom of sadistic Inspector Shuddh Singh (Sanjay Dutt).

25 years later, Shamshera's son Balli wishes to become the first Khameran police officer, and learns of his father's mistakes first-hand. Will the carefree youngster ever redeem himself and move past the sins of his father to achieve his officer dreams? Or will he go beyond, and truly rise from the ashes?

Shamshera, at its heart, despite all the tropes and clichés employed, has an interesting concept. A fictitious story set against the backdrop of British rule in 19th century India, and a budget and production quality that Yash Raj films can usually boast of - it has all the ingredients needed to make a masala entertainer that Bollywood desperately needs after all the recent big-budget flops. It also, quite uniquely for mainstream cinema, is a depiction of a tribal leader fighting against both the British rulers and the upper castes who think of him and his people to be beneath them.

But that is about everything the movie has going for it, we're afraid - it falls flat on about every other metric. The plot is wafer-thin and laughably predictable, with very convenient twists to pave the way for the inevitable redemption arc. The dialogue, while sounding authentic, has a maddening amount of rhymes being spouted by characters (please stop). Most of the characters are one-dimensional enough to be caricaturish, and even the "good" ones are over-the-top at times. The film also drags on for far too long, with a running time of almost 160 minutes. And the climactic scene is nothing short of ludicrous.

Shamshera, for all its merits in shining a light on caste issues, is also guilty of looking at the British in a very sympathetic manner. The movie takes it for granted that the audience will go along with its "the real enemy was often among us" messaging, when in fact there can exist a nuanced portrayal of two antagonistic factions. Bu then maybe it is the fault of yours truly for expecting nuance from Shamshera, deepest apologies.

Ranbir Kapoor is back on the big screen four years after Sanju in 2018, and he proves right in the first few minutes why he is considered one of the better actors of his generation. Playing a double role for the first time, Kapoor is believable as both the gruff, legendary Shamshera, and as Balli, the trickster who teaches kids to steal. He has shed his boyish charms, apart from in a couple of scenes, for an imposing physique - and he easily grabs attention in every frame.

Sanjay Dutt is atrocious as Shuddh Singh, making a deranged, sadistic bad guy end up looking like a pantomime villain. His overacting makes scenes - especially those in which his character is dealing with the British - downright unwatchable.

Vaani Kapoor is meant to be the one female character (two if you count Iravati Harshe who plays Balli's mother) in a movie that is all about men. Apart from one scene where her character Sona is part of the fight, she is largely meant to look good and offer emotional support to her man.

The supporting cast is able, and veteran actors such as Saurabh Shukla and Ronit Roy do what they can to elevate this mediocre film.

The music of Shamshera has been given by Mithoon, and it manages to provide appropriate fanfare to the events on the screen. And by appropriate, we mean appropriately average like the movie it has been composed for. The songs are catchy, but nothing spectacular - you have the rousing title track, a dance-along-to-this fun number like "Ji Huzoor", the usual Arijit Singh romantic melody in "Fitoor", and an item song - "Kaale Naina" in this instance. All standard stuff, with the polish you would expect from a Yash Raj Films presentation.

If you're the kind of person that can achieve total suspension of disbelief and lean in completely onto the absurdity of Shamshera, you have a fun masala entertainer in front of you. If not, you're better off waiting for it to come to one of the OTT platforms. Or you can just take a raincheck - you're not missing out on much.
Share. Save. Connect.
Tweet
SHAMSHERA SNAPSHOT 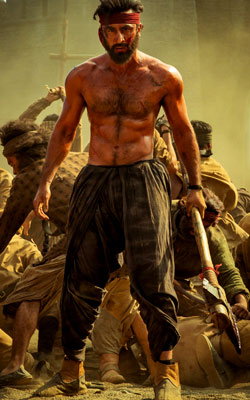 ADVERTISEMENT
This page was tagged for
Shamshera hindi movie
Shamshera reviews
release date
Ranbir Kapoor, Sanjay Dutt
theatres list
Follow @fullhyderabad
Follow fullhyd.com on
About Hyderabad
The Hyderabad Community
Improve fullhyd.com
More
Our Other Local Guides
Our other sites
© Copyright 1999-2009 LRR Technologies (Hyderabad), Pvt Ltd. All rights reserved. fullhyd, fullhyderabad, Welcome To The Neighbourhood are trademarks of LRR Technologies (Hyderabad) Pvt Ltd. The textual, graphic, audio and audiovisual material in this site is protected by copyright law. You may not copy, distribute, or use this material except as necessary for your personal, non-commercial use. Any trademarks are the properties of their respective owners. More on Hyderabad, India. Jobs in Hyderabad.