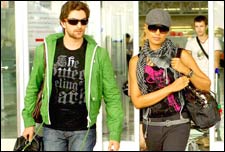 Samrat Sharma / fullhyd.com
EDITOR RATING
5.0
Performances
Script
Music/Soundtrack
Visuals
6.5
3.5
5.0
5.0
Suggestions
Can watch again
No
Good for kids
Yes
Good for dates
No
Wait for OTT
Yes
I hate to be negative about the new breed of different Hindi films, but I'm afraid Aa Dekhen Zara is emblematic of most current effort. It flirts with a unique concept, tries on some characterization for size, and then breaks right for typical Bollywood territory the first chance it gets.

Neil Nitin Mukesh plays Ray, a struggling photographer with not too many prospects, who one day inherits an old camera from his grandfather (Biswajit). Experimenting with it he realizes that this camera can - and here's the central conceit of the film, spoiler alert for those not in the know already - take pictures of the future. This time-space continuum bending gadget hands Ray a key to a very rich life.

Ray uses it as any kid would - he plays the races, gambles and usually just makes money off of a future-watching gadget. Soon-ish he meets a DJ, Simi (Bipasha Basu), and the director gets to wear his romance-shomance hat for a while. In a clear attempt at being Mr. India, the movie has this gadget turning a threat for the desh ke dushman types, personified in Rahul Dev playing someone named, simply, Captain.

Beyond the high concept, it is hard to believe anyone had any idea about this mish-mash of a film. The plot screams camp, the screenplay remains an undercooked thriller, and director Jehangir Surti's even-handed direction brings about a slickness that is completely wrong for the magic realism that should have been imbued here.

Especially when the desh ke dushman angle of repercussions and great-power-great-responsibility realizations come into play, the film gets as hokey as they get. The most Bolly of all third act, and some random song and dance thrown in, clearly show that no one wanted to risk anything, even though they wanted to make a 'different' film.

The winner here is the casting. Neil Nitin Mukesh has the right amount of cheer and naÃ¯vetÃ© that lends his role credence. It's impossible not to root for a guy that looks so vulnerable. What Mukesh does so well is modulate that basic character with peaks of desperation and an energy level that wisely goes for chaffed instead of confused.

Bipasha Basu has a different appeal. She is slightly off-kilter, but completely in control, and despite an underwritten role, brings about a strength of persona to the role that makes the onscreen duo appear to be able to do the impossible. She channels an inner strength and displays a strange solitude that I'm not sure is all scripted. Nonetheless, she is bloody effective, and smokin' to boot.

Shantanu Ray Chhibber and Sheershak Anand's script foists actions upon the actors that often feel like the product of masala templating. Every thriller movie clichÃ© including on-foot chases and slow motion jumping off a building is used as a means to make the trailer appear slick. Never mind what that does to the darned film.

Jehangir Surti's effort is not futile - the man has an understanding of basic shot-taking, and some of the action is well-mounted. But the clean yet bland style of thriller film-making has been overdone, especially by less talented directors, and obviously Surti has nothing new to add. This is a film that is begging to be given a campy treatment and some really outrageous stunts, but what you have to settle for is a tiresome, clichÃ©d flick that has been lobotomized into being what it is.
Share. Save. Connect.
Tweet
AA DEKHEN ZARA SNAPSHOT

ADVERTISEMENT
This page was tagged for
Aa Dekhen Zara hindi movie
Aa Dekhen Zara reviews
release date
Bipasha Basu, Neil Nitin Mukesh
theatres list
Follow @fullhyderabad
Follow fullhyd.com on
About Hyderabad
The Hyderabad Community
Improve fullhyd.com
More
Our Other Local Guides
Our other sites
© Copyright 1999-2009 LRR Technologies (Hyderabad), Pvt Ltd. All rights reserved. fullhyd, fullhyderabad, Welcome To The Neighbourhood are trademarks of LRR Technologies (Hyderabad) Pvt Ltd. The textual, graphic, audio and audiovisual material in this site is protected by copyright law. You may not copy, distribute, or use this material except as necessary for your personal, non-commercial use. Any trademarks are the properties of their respective owners. More on Hyderabad, India. Jobs in Hyderabad.