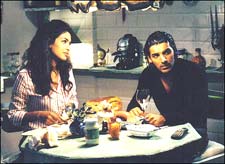 EDITOR RATING
6.0
Performances
Script
Music/Soundtrack
Visuals
NA
NA
NA
NA
Suggestions
Can watch again
NA
Good for kids
NA
Good for dates
NA
Wait to rent it
NA
Karam is a report on the life of a contract killer who finds out the hard way what Lord Krishna discovered so many centuries ago and sang a full-length highly-publicized song about: that what you do comes back to you. It's surprising how many people decide to reinvent the wheel and then have a whole movie made documenting their efforts.

So John (John Abraham) will like kill for money. This is the complete price chart:

Special Discounts
For Killing Wrong Person: 50%
If No Bill Required: 12.5%
If Murder Is On Your Birthday: 15%

It's a good business and his share price is also doing well, and he also has a hot girlfriend Shalini (Priyanka Chopra). Now most girls like their boyfriends to be rich industry scions, academic genuises, dynamic entrepreneurs or handsome models, but this film shows that there are girls who would be in love with hitmen with no redeeming features, too. "Hi, what do you do?" "I'm a contract killer." "Oooh, let's have sex!"

Well, one day John poofs off a young girl and her entire family by mistake. For some reason he thinks this is more of a sin, and is all contrition - he wants to dog it all and move with Shalini to a sanguine seafront. But suddenly the rich and powerful Captain (Bharat Dhabolkar) wants him on an important assignment to kill 5 big rivals, and shanghais Shalini to ensure John delivers. After making a futile attempt to rescue Shalini, John gets onto the job. How he dies and Shalini is left a widow forms the rest of the film.

The redeeming feature of Karam is that it keeps you hooked all through, though the sentimental exchanges between John and Priyanka are hackneyed and stereotyped. The visuals are slick and the action sequences are gripping, but the film fails to be in the league of a Satya mostly since Satya has already happened, and since the dialogues in this one are simply not incisive enough.

John Abraham is just about okay in his role if you go in with low expectations, but Priyanka is a fairly good performer. She does manage to bring in the tenderness into their relationship. The performances are all fine, and the songs are good, too - especially the title song.

ADVERTISEMENT
This page was tagged for
Karam hindi movie
Karam reviews
release date
John Abraham, Priyanka Chopra
theatres list
Follow @fullhyderabad
Follow fullhyd.com on
About Hyderabad
The Hyderabad Community
Improve fullhyd.com
More
Our Other Local Guides
Our other sites
© Copyright 1999-2009 LRR Technologies (Hyderabad), Pvt Ltd. All rights reserved. fullhyd, fullhyderabad, Welcome To The Neighbourhood are trademarks of LRR Technologies (Hyderabad) Pvt Ltd. The textual, graphic, audio and audiovisual material in this site is protected by copyright law. You may not copy, distribute, or use this material except as necessary for your personal, non-commercial use. Any trademarks are the properties of their respective owners. More on Hyderabad, India. Jobs in Hyderabad.