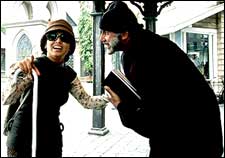 What if you had to live in it all your life?

That is the world of Michelle McNelly (Ayesha Kapur/Rani Mukherjee), a world where no light ever flickers, a world where no sound is ever heard, a world where everything is BLACK. It has been that way since she was two. Had it not been for Devraj Sahai (Amitabh Bachchan), she would have been sent to an asylum.

Michelle is a very unruly child. Never having seen or heard can do that to anyone. As a last ditch effort, her mother, Catherine (Shernaz Patel), sends for Mr. Sahai, a teacher who works with the deaf-blind. His methods would not exactly be called benign, but they work.

Slowly, he weaves his magic around her and teaches her. He teaches her words. More importantly, he teaches her their meanings. He gives her dignity and self-esteem. He shows her the world through his eyes. He reposes his faith in her, so much so that she graduates with a BA degree.

If there is one director who treads only the path of making brilliant movies, then he has to be Sanjay Leela Bhansali. Black is technically almost flawless. Almost, because the screenplay slightly drags post-interval. Despite that, the film is in a league of its own. All pieces fit in perfectly. Even the bit about the sibling rivalry on the part of Michelle's sister, Sara (Nandana Sen), seems believable.

A movie like this rides on performances. And both Rani Mukherjee and Amitabh Bachchan come up with ones of a lifetime. And not only the lead pair, even the support cast of Nandana Sen, Shernaz Patel and Dhritiman Chaterji impresses. Ayesha Kapur as the child Michelle is simply outstanding. It is hard enough to understand a character like Michelle - to play it when you are about ten is amazing.

Yes, the movie is heavily inspired from the life of Helen Keller and Annie Sullivan. For those who may not be aware, Helen Keller was born deaf-blind, and Annie was her teacher. It was Helen who set up the first schools for the less fortunate among us.

The movie celebrates this triumph of the human will above anything else.
Share. Save. Connect.
Tweet
BLACK SNAPSHOT

ADVERTISEMENT
This page was tagged for
black hindi movie reviews
movie review of black
Black hindi movie
Black reviews
release date
Follow @fullhyderabad
Follow fullhyd.com on
About Hyderabad
The Hyderabad Community
Improve fullhyd.com
More
Our Other Local Guides
Our other sites
© Copyright 1999-2009 LRR Technologies (Hyderabad), Pvt Ltd. All rights reserved. fullhyd, fullhyderabad, Welcome To The Neighbourhood are trademarks of LRR Technologies (Hyderabad) Pvt Ltd. The textual, graphic, audio and audiovisual material in this site is protected by copyright law. You may not copy, distribute, or use this material except as necessary for your personal, non-commercial use. Any trademarks are the properties of their respective owners. More on Hyderabad, India. Jobs in Hyderabad.