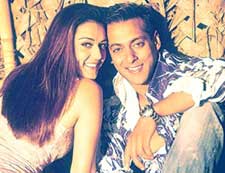 Deepa Menon / fullhyd.com
EDITOR RATING
3.0
Performances
Script
Music/Soundtrack
Visuals
NA
NA
NA
NA
Suggestions
Can watch again
NA
Good for kids
NA
Good for dates
NA
Wait to rent it
NA
A frazillion years ago, in the time of roll-up landscapes, cardboard props and Doordarshan, there once was a show called Something Or The Other. Every episode was a different story, each more unbelievable than the last. That was, in fact, the premise of the whole enterprise: to bring you tales from the edge of Reason. Dil Ne Jisse Apna Kaha attempts to do the same, but where the original held its footing by fluke or ingenuity or both, this cheesy Bollywood take-off falls right over that edge, splashes about pathetically, and sinks without a trace.

DNJAK is an intensively gushy story that steals its basic idea from one breathtakingly stupid episode of the above-mentioned serial. In the original, a girl who is stalked by a pale-eyed stranger later finds out his obsession is due to the fact that he received a retinal implant from her dead boyfriend. So his eyes retained the memory of her face, and hence could not stop following her creepily. Yes, life was difficult before satellite TV.

In order to contribute towards undoing all the painstaking work organ donor networks have accomplished, DNJAK goes a good bit further and totally milks this dud of a story for everything it hasn't got. Replace eyes with heart, creepy-guy-behind-cardboard-tree with Bhoomika, stalked girl with Salman Khan, dead boyfriend with Preity Zinta and you have Dil Ne Jise Apna Kaha - a story that goes nowhere, and takes its time over it.

Pari (Zinta) and Rishabh (Khan) are a young married couple, totally in love. They spend the first one hour of the film demonstrating this love through endless, nauseating snippets from Cootchie-Coo Land. Then one day, Pari meets with an accident and dies. But not before donating her heart to one of her patients, Dhaani (Bhoomika).

Rishabh is shattered by his wife's death and wants to have nothing to do with the recipient of her last act of kindness. He throws himself into making Pari's fond wish of a children's hospital come true. And this is how he meets Dhaani, his company's latest recruit.

While Rishabh vaguely senses some sort of connection with the new girl, she loves him direly at first sight. (Romance at short notice is a little-known side-effect of heart transplant surgery. Due apologies to Saki, he would have understood.) Dhaani dances, sings, falls over him, but to no avail. He will have none of it. So she also dies.

No wait, that was just wishful thinking. The film's plot is incredibly tacky and so ridden with sentimental drivel that you want something bad to happen to somebody at the end of it. Insipid is the kindest thing you can say about the music, performances and screenplay. Salman Khan, however, plays the grief-struck widower with no restraint, but plenty of heart. So that's something. It's not enough to drag your behind to the theater, though. Leave it on the couch then, and send up a prayer for the thirteen channels of shit you have to choose from. And that little red button on your remote control, without which it would all be much worse.

ADVERTISEMENT
This page was tagged for
Dil Ne Jise Apna Kaha hindi movie
Dil Ne Jise Apna Kaha reviews
release date
Salman Khan, Preity Zinta
theatres list
Follow @fullhyderabad
Follow fullhyd.com on
About Hyderabad
The Hyderabad Community
Improve fullhyd.com
More
Our Other Local Guides
Our other sites
© Copyright 1999-2009 LRR Technologies (Hyderabad), Pvt Ltd. All rights reserved. fullhyd, fullhyderabad, Welcome To The Neighbourhood are trademarks of LRR Technologies (Hyderabad) Pvt Ltd. The textual, graphic, audio and audiovisual material in this site is protected by copyright law. You may not copy, distribute, or use this material except as necessary for your personal, non-commercial use. Any trademarks are the properties of their respective owners. More on Hyderabad, India. Jobs in Hyderabad.