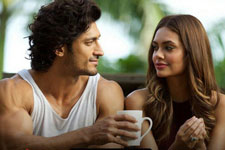 Vaishnavi Kulkarni / fullhyd.com
EDITOR RATING
4.0
Performances
Script
Music/Soundtrack
Visuals
4.5
3.5
5.0
5.5
Suggestions
Can watch again
No
Good for kids
No
Good for dates
No
Wait to rent it
Yes
With Commando 2, director Deven Bhojani brings you a stand-alone sequel to Commando: A One Man Army, the first of the series which managed to do well enough to justify making a second. Vidyut Jamwal reprises his role as the hunky Karanvir Dogra - and that's about the extent of the correlation between Commando 2 and its predecessor.

Without further ado, let us dive into the action - and fantasy, because of how much of it is rather unbelievable - packed world of Commando 2: The Black Money Trail, otherwise known as Mission Impossible: The Demonetisation Sensation That's Gripping The Nation (thanks, Fred and George).

The ambiguously named Vicky Chaddha, a black money agent honoured with a place on India's most wanted list, is holed up in Malaysia with his wife, the ravishing Maria (Esha Gupta). The seemingly corrupt people back home find out, and are itching to get their greasy palms on Vicky and the money that is not-so-rightfully theirs.

A team of four persons, who are about as morally compromised as they come, is put together by the Home Minister to bring Vicky back to his beloved homeland. What follows is a movie that makes you feel like you are watching The Newshour Debate with a clutch of evasive politicians - no one ever seems to get to the point, and you are mildly entertained for a bit and majorly frustrated by the end of it.

Karan the Commando, Bhavna Reddy (Adah Sharma) the encounter specialist, Bakhtawar (Freddy Daruwala) the lathi-lover, and Jaafar Hussain a. k. a. the little coder that could, fly to Malaysia and meet the infamous Vicky Chaddha and Maria. Maria later visits Karan and makes a show of Vicky being innocent and so patriotic that he bleeds tricolored blood. For some obscure reason that we shall not delve into, she declares herself open to prostitution, as long as she is recompensed for her troubles with the trust of the understandably nonplussed Karan.

This long-winded beginning is proceeded by an even more convoluted story in which numerous events transpire, a few of which are noteworthy. There are betrayals and twists in the tale, and you react to some by clutching your pearls to your chest and fanning yourself, and to others with a disdainfully raised eyebrow and an eyeroll - whoever saw THAT coming? We do get a happily ever after; the evil witch dies, the prince and princess kiss, and they all live happily and stereotypically ever after.

Like the bread and butter of James Bond films, there are gadgets and gizmos aplenty - a plan that employs around 10 identical Men In Black with silver briefcases as decoys is foiled when Karan busts out a pair of binoculars that can see through solid metal. Unfortunately, there were clearly some budget cuts here that MI6 didn't have to deal with - Karan does not drive around an Aston Martin. This leads to something every 007 starrer lacks: a super intense, nail-biting and nerve-wracking low-speed bicycle chase through crowded vegetable markets. No, really - it's terribly exciting!

Karan is a bundle of paradoxes - at one point, he displays a knowledge of sound frequencies and deductive reasoning abilities that would almost put Heinrich Hertz and Sherlock Holmes to shame. Almost. In another scene, while searching the apartment of one Jimmy Kher who takes man-buns very, very seriously, this highly trained commando somehow misses a door that has been staring him right in the face, unlocked and ready to be opened. An errant cockroach saves him from his moment of disgrace and helps with the discovery. Remember, kids, cockroaches over K-9s.

The movie has some fun action sequences and stunts, but most are just plain ridiculous. In a twist of reverse racism, blue-eyed white guys swoop down on our brown-skinned protagonists. Karan executes some high-jumps that would have guaranteed him a podium finish at the Olympics, while the villains bounce around on some kind of miniature metal trampolines. They even graciously take a break to allow Karan to demonstrate his prowess in baton-twirling before he single-handedly destroys them.

The film has an overly-dramatic, continuous background score that gives you the feeling of watching a bad soap opera - it has the unnecessary slow-motion effects of that genre, too. There are at least five instances of the characters walking in a way that makes you want to photoshop a pair of (#thuglife) sunglasses onto their faces, while the repetitive theme track plays to the beat of their exaggerated footsteps. Maria is accompanied by the sound of windchimes and tinkling bells whenever she sashays into a room - who knows why?

Commando 2 tries to impart a well-intended message about patriotism and the state of farmers in our country, but that loses its significance because of the rushed way it is conveyed in. The Demonetisation Force is strong with this one - the farmers all have connected smartphones and bank accounts, cashless economy and Digital India winning all the way.

The performances by the cast are utterly mediocre. Vidyut Jamwal expresses more with his muscles than his mouth. Adah Sharma as Bhavna Reddy, aka Diary Of A Shopaholic, sounds forced and unnatural with her broken english and grating accent. Esha Gupta's perpetual expression of smug satisfaction causes a disproportionate amount of annoyance, and Freddy Daruwala manages to stay monotonously stony-faced throughout the movie.

If you want to watch a movie this weekend that has believable action scenes, a structured and intriguing plot, and good performances, just rent the Arnold Schwarznegger namesake instead. If all you are targeting is a couple of hours of mindless entertainment and occasional laughs, enjoy the exotic locales, the even more exotic women and the chiselled macho men of Commando 2.
Share. Save. Connect.
Tweet
COMMANDO 2 SNAPSHOT 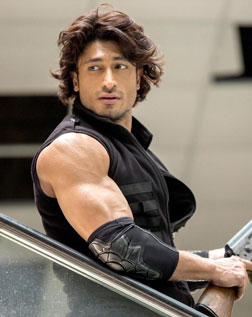 See Commando 2 full details
COMMANDO 2 USER REVIEWS
1 - 1 OF 1 COMMENTS
POSITIVE  |  NEGATIVE |  NEWEST  |  OLDEST  |  MOST HELPFUL  |  LEAST HELPFUL
Josh on 5th Mar 2017, 3:53am | Permalink
There will come a day, Vaishnavi, when you can't use the sentence "The performances by the cast are utterly mediocre" anymore simply because you've used it so many times already. Then you'll start digging for other ways to say the same thing and that's when you're likely to discover humour as your armour, your antidote, and your best friend.

ADVERTISEMENT
This page was tagged for
commando 2 movie in 720pgolkes
Commando 2 hindi movie
Commando 2 reviews
release date
Vidyut Jamwal, Adah Sharma
Follow @fullhyderabad
Follow fullhyd.com on
About Hyderabad
The Hyderabad Community
Improve fullhyd.com
More
Our Other Local Guides
Our other sites
© Copyright 1999-2009 LRR Technologies (Hyderabad), Pvt Ltd. All rights reserved. fullhyd, fullhyderabad, Welcome To The Neighbourhood are trademarks of LRR Technologies (Hyderabad) Pvt Ltd. The textual, graphic, audio and audiovisual material in this site is protected by copyright law. You may not copy, distribute, or use this material except as necessary for your personal, non-commercial use. Any trademarks are the properties of their respective owners. More on Hyderabad, India. Jobs in Hyderabad.