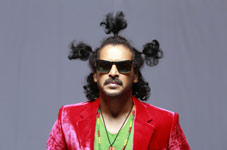 Josh / fullhyd.com
EDITOR RATING
4.0
Performances
Script
Music/Soundtrack
Visuals
6.0
3.0
3.0
6.0
Suggestions
Can watch again
No
Good for kids
No
Good for dates
No
Wait to rent it
Yes
Fifteen minutes into Upendra 2, in the confines of a dark, large, and full hall in Moosapet, the audience was confronted with a blank screen for about a minute or so. Impatience was beginning to express itself in the form of hoots and expletives. This reviewer too waited for the generator to be switched on and the movie to be projected again. At this point, a member in the audience had an epiphany and hollered, "This blank screen is a part of the movie! It's an Upendra film!"

Upendra did not disappoint his fan. The blank screen of two minutes was indeed a part of the movie. A lot of other such strange things happen in Upendra 2. And all of this was to be expected, too. Anyone who's watched the first part knows the man's penchant for quirky madness. He goes all out in this one to unsettle you and make you think you're watching something absolutely new. Only, while he succeeds at that, he may have gone a bit too far. Forget awe or disbelief, you feel exasperation.

Upendra, the first part, worked because of the rather powerful allegory of how the ego (which is essentially the Freudian Id as portrayed by Upendra's "Nenu") negotiates with the world and is drawn to Love, Lust and Fame (Prema, Rathi and Keerthi as the heroines are named). The movie didn't boast of great technical values or smooth film-making. The only things that Upendra had going for it were the interesting and intuitive plot, Upendra's shenanigans and an unfettered performance (his title card proclaims "Crazy Star Uppi" - and we agree wholeheartedly over the choice), and some really fun catchy tunes by Gurukiran.

But Upendra 2 doesn't benefit from the same. This time around, the script is a mess. Upendra must definitely feel he has come up with a phenomenal new allegory, but he fails at making it intuitively accessible to the viewer. Practically no one in the audience was sure of what was happening in the movie. For your benefit, we'll quickly summarise the two maxims he repeats over and over.

Hmmm, that's about it. The Plot, you ask? There's a guy who called "Nuvvu" who spouts the above mentioned maxims. Cops and goons are all searching for him. Also, a student called Lakshmi (played by a Russian Kristina Akheeva who was brought up in Australia and is now playing a South-Indian girl) falls in love with him. People overact and overact till they feel satisfied that they've done enough acting for their whole careers. There are also an undercover cop (also the "Nenu" from the earlier movie), a Ganja-smoking baba, a very wealthy woman who writes a poem for a legal will, an underworld don in Dubai, and more. Now go figure.

The only thing that works around here is Upendra himself. You can't accuse him of lack of passion or enthusiasm. He sure believed in his story, whatever it was. He spent all the time and money (plenty of it), and acted his guts out. He looks like a million bucks (the man is really, really fit for someone 47 years old). He seems to have had the time of his life making Upendra 2. You can perhaps watch this one solely for the audacity of this one man.

The music is ordinary, except maybe the "No Excuse Me Please" track which is pretty catchy. The visuals are good - there's been quite some money spent here. The filmmaking is like much of Upendra's other work - he is a second rate director without a qualm for fluidity in narrative, and subplots and characters are frequently thrown up into an already convoluted and incomprehensible plot.

Indeed, while you can admire the man for his enthusiasm and dedication to cinematise pop-philosophy, you just can't overlook the sub-par filmmaking here. Perhaps future generations will hail the film as an avant garde post-modernist classic, but you don't venture into such analyses when you are clearly bored in the movie hall (we could hear the collective sighing in the cinema).

Upendra's work inspires a metaphor of nude protests (not least because of the overwhelming presence of rotund male torsos in the movie). His films employ crudeness to communicate a message quite like nude protests use nudity to draw attention to a cause. You can question both the cause and the methods employed, but you have to take notice, and that's what Upendra seems to aspire to, too. However, Upendra 2 feels more like a nude protest in a soccer match. It looks like a streaker and that's it. Cause? What cause?
Share. Save. Connect.
Tweet
UPENDRA 2 SNAPSHOT 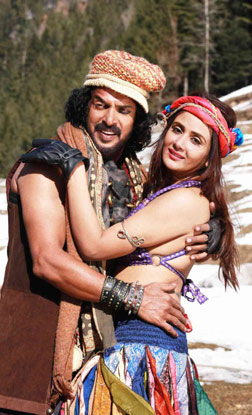 ADVERTISEMENT
This page was tagged for
upendra 2 telugu movie kickass
upendra 2 telugu movie download movierulz
Upendra 2 Telugu Full Movie Download Movierulz
Upendra 2 Telugu movierulz
Uppi 2 Kannada Movie Download Movierulz
Follow @fullhyderabad
Follow fullhyd.com on
About Hyderabad
The Hyderabad Community
Improve fullhyd.com
More
Our Other Local Guides
Our other sites
© Copyright 1999-2009 LRR Technologies (Hyderabad), Pvt Ltd. All rights reserved. fullhyd, fullhyderabad, Welcome To The Neighbourhood are trademarks of LRR Technologies (Hyderabad) Pvt Ltd. The textual, graphic, audio and audiovisual material in this site is protected by copyright law. You may not copy, distribute, or use this material except as necessary for your personal, non-commercial use. Any trademarks are the properties of their respective owners. More on Hyderabad, India. Jobs in Hyderabad.