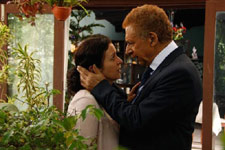 Swayamsrestha Kar / fullhyd.com
EDITOR RATING
5.5
Performances
Script
Music/Soundtrack
Visuals
6.0
5.0
5.0
6.0
Suggestions
Can watch again
No
Good for kids
No
Good for dates
No
Wait for OTT
Yes
The common man is an enigmatic creature. There's something so disturbingly ordinary, something so ineffably mundane about him that he has been declared the Renaissance's muse.

The common man is the ultimate motif of civilization. Here is someone who seems to have distanced himself from all base instincts, in order to be domesticated into social acceptance. Here is someone who rarely feels intense emotions, and for whom a routine is the most precious achievement of his clockwork life.

In John Day, the eponymous character, played by Naseerudin Shah, is a bank manager. Perhaps one of the most unexciting job profiles out there. He is an aging man, with a wife and a daughter. He is soft around the edges, and trembles inexorably when faced with even the prospect of holding a firearm.

Yet, the story requires him to be a reluctant renegade, to be someone who has lost the two constants of his ordered life - his wife and daughter - and therefore, has been symbolically exempted from the conveyor queue of social norm and convention. He now exists outside civilisation.

At least, this is what the movie sets out to achieve. Hence, the confusing title.

The movie begins promisingly enough. A young couple sneaks off for a rendezvous to a secluded spot called the Casablanca Estates. Something happens, and the girl dies. She was John Day's daughter.

Two years later, John's wife (Shernaz Patel) is held hostage by goons, so that her husband would be forced to aid a group of bank robbers. She is injured critically, and goes into coma.

Then, there is a swaggering menacing cop called Gautam (Randeep Hooda), who is the brooding kind of unscrupulous, with an alcoholic girlfriend (Elena Kazan) to boot. He commits gruesome murders without flinching, and has had a traumatic childhood himself. He may not incite sympathy, but he does not provoke contempt either.

Both the men have their interests vested in Casablanca Estate. One wants revenge, and one is in it for the money. One has lost his family, and consequently, the normalcy in his life, while the other wants a chance at having a normal life for once.

It is when a movie manages to disappoint, in spite of having two lead characters with such delicious potential pitted against each other, that you start to feel the stirrings of resentment yourself. John Day might be coming from the producer of A Wednesday, but it does not rivet like the other Naseerudin Shah starrer. The plot has loopholes which simply can't be overlooked, no matter how much the acting might dazzle us.

For example, we never know how John gets to know about Casablanca Estates. Sure, the bank robbers toss files around while they are rooting through the bank's valuables, but John is all tied up and unconscious then.

Also, it is unrealistically easy for John to track down key members of an underworld organisation. And, really, how can a 50-something man outrun a whole bunch of brawny gangsters?

The writing is also a bummer. Seriously, Randeep Hooda's character is reminiscent of Akshay Kumar's recent turn as Shoaib in OUATIMD. Both speak in clich?d epigrammatic sentences, and are mawkishly sketched out.

Another thing - we might be a bit less squeamish around blood and gore these days, what with more movies boldly venturing into the territory of gritty and (literally) visceral visuals, but the gore sans logic or requirement need not exactly grab attention. Unless you are Quentin Tarantino, of course.

John Day, as a premise, has some serious philosophical fallacies. John's transition from mild-mannered bank manager to gun-toting revenge-seeker is too sudden. We felt deprived of a serious emotional journey, of the chance at seeing the character acclimatise to the idea of revenge, because revenge, as a rule, cannot be sought under duress. It is an act that revels in its willingness. Taking this into consideration, we never see the exact moment that spurs John into the path of vengeance. We never see the trigger.

We must mention the cinematography as a positive, though. During a particular chase scene, all we see are shadows on the walls of silent houses in a colony. There are Christmas decorations everywhere, and a slow rendition of the carol "Silent Night" is playing in the background. In those few moments, a spell was cast in the movie hall.

Naseerudin Shah is exemplary as the titular John Day. The veteran seems to be getting better with practice, and it is a shame that the flaws of the movie let him down.

This is definitely one of Randeep Hooda's better performances. What he lacks in credible dialogues, he makes up for in body language. There's a scene in particular where he portrays the emotions of shock, grief and anger so beautifully that it took our breath away.

John Day is watchable only for the lead actors. But then, that is not enough. Oh how sadly is it not enough!
Share. Save. Connect.
Tweet
JOHN DAY SNAPSHOT 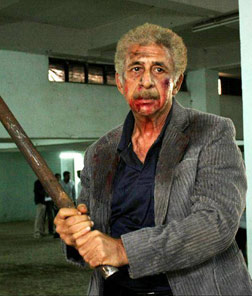 ADVERTISEMENT
This page was tagged for
John Day hindi movie
John Day reviews
release date
Naseeruddin Shah, Randeep Hooda
theatres list
Follow @fullhyderabad
Follow fullhyd.com on
About Hyderabad
The Hyderabad Community
Improve fullhyd.com
More
Our Other Local Guides
Our other sites
© Copyright 1999-2009 LRR Technologies (Hyderabad), Pvt Ltd. All rights reserved. fullhyd, fullhyderabad, Welcome To The Neighbourhood are trademarks of LRR Technologies (Hyderabad) Pvt Ltd. The textual, graphic, audio and audiovisual material in this site is protected by copyright law. You may not copy, distribute, or use this material except as necessary for your personal, non-commercial use. Any trademarks are the properties of their respective owners. More on Hyderabad, India. Jobs in Hyderabad.