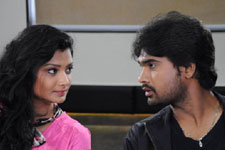 Kritika Deval / fullhyd.com
EDITOR RATING
1.0
Performances
Script
Music/Soundtrack
Visuals
4.0
1.0
2.0
4.0
Suggestions
Can watch again
No
Good for kids
No
Good for dates
No
Wait to rent it
No
The film comes with the warning - "Akrama sambandhalu mee kutumbaniki hanikaram. Deeniki chellinchali bhari moolyam". Filmgoers in Hyderabad will recognize this as a paraphrasing of the ubiquitous anti-smoking PSA that precedes every movie. This is the basic message of Miss Leelavathi, along with other gems such as how cyclones are always named after beautiful women. More on that later.

Basically Miss Leelavathi (played by Leelavathi) is a "glamorous" bike-riding, chain-smoking, bag-punching aspiring filmmaker who encounters Karthik (played by Karthik, because, of course) via the '80s method of stumbling upon a date - dialing a wrong number. They talk, meet, frolic, frolic under the sheets, and frolic some more until, one fine day, it turns out that Karthik has a lovely wife of his own (Divya). In true Suneel Kumar Reddy style, Leela goes unhinged, Karthik gets scared, Leela dumps him, Leela comes back wanting to continue the affair, and then Hudhud happens. No, really.

Director Suneel Kumar Reddy must have had some very unpleasant encounters with the opposite gender. Cases in point include at least this, this, and this. We get that most Telugu filmmakers don't do well with the idea that two people connecting outside of our social construct cannot end in anything but disaster, but conflating human fallibility with a natural disaster that straight up killed people might just be... erm... overkill.

There are some very specific assumptions that his films tend to make, the first being that no man can ignore a call to penis, and the second being that the woman involved will invariably turn batshit insane. Not just angry or vengeful in a way that might be understandable under the right circumstances, but downright certifiable.

"Miss" Leelavathi seems, for the most part, to be a woman who's pretty self-actualized. We can see how having to find out that someone she's been bumping the uglies with is a proper heel might be real angry-making, but then she goes right off the rocker, with the final message of the film being that men should not do adultery, not because cheating on one's loving spouse is a shit thing to do, but because the one you're doing the cheating with will eventually put you in the hospital.

One cringe-worthy scene after another, this film just piles on the stereotypes and the 'life lessons', using some of the most unpleasant characters to hurl the point across at the hapless viewer. It is somewhat disgusting that our filmmakers will gratuitously sexualize their characters to get the point across that sex is bad. This is even more hypocritical when the makers have to know that most of the money they'll be making will come from 'B' and 'C' centers, specifically from viewers who are there for the sexing.

Leelavathi is actually a half decent actor on the rare occasions she gets to express with honesty. Karthik gives a lackluster performance in a lackluster character. The cinematography is competent, while the music is quite good. None of this matters, because the film itself is an assault on any stray thought a human mind may possess.

Most Telugu films with a "message" for the "youth" generally follow some pretty messed up tropes. Miss Leelavathi, on the other hand, is pure, unadulterated insanity, and not even in a good way.
Share. Save. Connect.
Tweet
MISS LEELAVATHI SNAPSHOT 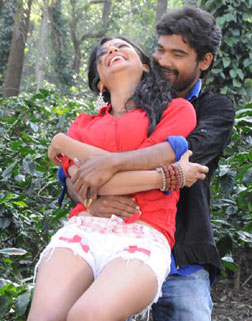 ADVERTISEMENT
This page was tagged for
miss leelavathi telugu movie review
Miss Leelavathi telugu movie
Miss Leelavathi reviews
release date
Karthik, Leelavathi
Follow @fullhyderabad
Follow fullhyd.com on
About Hyderabad
The Hyderabad Community
Improve fullhyd.com
More
Our Other Local Guides
Our other sites
© Copyright 1999-2009 LRR Technologies (Hyderabad), Pvt Ltd. All rights reserved. fullhyd, fullhyderabad, Welcome To The Neighbourhood are trademarks of LRR Technologies (Hyderabad) Pvt Ltd. The textual, graphic, audio and audiovisual material in this site is protected by copyright law. You may not copy, distribute, or use this material except as necessary for your personal, non-commercial use. Any trademarks are the properties of their respective owners. More on Hyderabad, India. Jobs in Hyderabad.