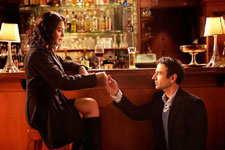 Nupur Barua / fullhyd.com
EDITOR RATING
5.0
Performances
Script
Music/Soundtrack
Visuals
5.0
4.0
5.0
7.0
Suggestions
Can watch again
No
Good for kids
No
Good for dates
Yes
Wait to rent it
No
The only relevant detail you need to know about Ishkq In Paris is that it is Preity Zinta's debut production, which explains how she could choose to delay the release of the film when the director Prem Raj fell ill. It was a touching gesture, of course, but one is not sure if it was the right decision. The Indian audience is now exposed to an eclectic mix of sensibilities from various filmmakers, and its taste is evolving, so a romcom set in a foreign city may not be as appealing as it was in Karan Johar's glory days.

Now for the story. Ishkq (Preity Zinta) is a "bohemian" Indian girl who lives in Paris. She loves herself, and her life, and she is definitely not looking for romance. That does not stop her from hooking up with London-based Acash (Rrehan Malliek, formerly known as Gaurav Channa) and spending a fun-filled night exploring the lights and laughter in Paris, much like Before Sunrise.

So the two strangers party and drink and laugh, as they pick options for the activities they want to indulge in. Ishkq is pretty clear that she does not want a commitment, and Acash is happy to help. That night, at least.

Then comes Serendipity. The two strangers part, only to meet again, and this time, Acash is convinced that their fates are entwined. Ishkq does not believe him, and their relationship becomes strained. Will they get together, or won't they? Will Ishkq be able to rid herself of the carefree tag that she has so diligently maintained over the years? Does Acash know what he wants?

These and other questions will be answered over time, as the characters and others delve into the philosophies of love, relationships, egos, commitments, happiness, need, want and other emotions.

The story is not very complicated, but the plot points in the movie lack the depth that one would expect from a subject like this. The largest flaw in the execution of the screenplay is the characterisation. Each character is superficial, and, for lack of a better word, very wannabe.

There are various aspects that do not work to the advantage of the screenplay. For example, the Punjabi factor. Just because Ishkq has Indian roots and she is fun-loving, she has to be Punjabi. Why? Because no other Indian is that loud? Or because only Punjabi men marry white women?

Then, there is the contradiction between Ishkq's diktaats to Acash - she tells him to remain Indian, even in Paris, one minute; and the next, she tells him that because they are in Paris, they cannot entertain Indian theories of living together for eternity. And then they all rush off to India for a great big Punjabi wedding.

From the looks of it, the makers of the film were a little unclear about their target audience. There is a little something in the movie for everybody, which may be considerate, but does not help to make it a strong, relatable story - the wild Paris nights for the party-going audience, the family value angle for family audiences, the question of roots and beliefs for the moral police and NRIs, the romance for the romantics, and the commitment-phobic protagonist for feminists, to name a few.

Preity Zinta wants us to know that she is still around, but she forgets that she is no longer the pretty young thing that she was in Dil Se. She smiles too much, with her dimpled cheek turned towards the camera all the time. She does her bubbly laugh and wide-eyed expressions, and even her pouts, but as Ishkq, she comes across as a shallow, not-too-likeable character (and she is the protagonist), who needs a dose of reality - this was clearly not the purpose of Ishkq.

Rrehan Malliek is not as bad, but he is overshadowed by Preity Zinta's constant giggles. He tries his best to be the Acash that the writers intended him to be, and he does a decent job.

Isabelle Adjani is lost, and her lines dubbed in Hindi make her look plain confused. What a waste of good talent. The cameos are the only exciting parts in the movie, as far as acting is concerned.

The songs are bland, and not even the Rahat Fateh Ali Khan number, "Saiyaan Na Jaa Rey", can add zing to the soundtrack. The production and costume designs are above average, in parts, but they cannot rise above the mediocre script.

Cinematography is interesting, and while most of the shots are clich?Â©s that one would expect from a movie set in Paris, there are some sequences that can take your breath away and make you forget that you are watching an outdated movie that tries too hard to be a romcom.

Ishkq In Paris has been released two years too late, and the Indian audience has moved on from Jab We Met and Geet-like characters. Speaking of which, Kareena Kapoor has done a better job of the unapologetic commitment-phobic Indian woman living abroad in Ek Main Aur Ekk Tu, and we suggest you rent a DVD of that movie, to get over this one.
Share. Save. Connect.
Tweet
ISHKQ IN PARIS SNAPSHOT 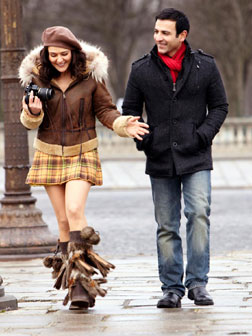 ADVERTISEMENT
This page was tagged for
ishkq in paris movie in hindi
Ishkq In Paris hindi movie
Ishkq In Paris reviews
release date
Preity Zinta, Rhehan Malliek
Follow @fullhyderabad
Follow fullhyd.com on
About Hyderabad
The Hyderabad Community
Improve fullhyd.com
More
Our Other Local Guides
Our other sites
© Copyright 1999-2009 LRR Technologies (Hyderabad), Pvt Ltd. All rights reserved. fullhyd, fullhyderabad, Welcome To The Neighbourhood are trademarks of LRR Technologies (Hyderabad) Pvt Ltd. The textual, graphic, audio and audiovisual material in this site is protected by copyright law. You may not copy, distribute, or use this material except as necessary for your personal, non-commercial use. Any trademarks are the properties of their respective owners. More on Hyderabad, India. Jobs in Hyderabad.