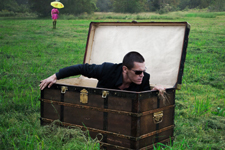 Nupur Barua / fullhyd.com
EDITOR RATING
5.0
Performances
Script
Music/Soundtrack
Visuals
6.0
4.0
4.0
6.0
Suggestions
Can watch again
No
Good for kids
No
Good for dates
No
Wait to rent it
Yes
South Korean films thrive on violence and Greek tragedies. There is something so inherently gloomy in them that you willingly suspend your disbelief to allow total immersion in the stories that, more often than not, have ambiguous or unhappy endings.

Yet, when an American filmmaker as renown as Spike Lee, not known for fluff, decides to remake a famous South Korean film in the English language, you are not so convinced. Which is why Oldboy, in English, does not have the same impact now that the original did, 10 years ago.

Joe Doucett (Josh Brolin) is an obnoxious man. He is not only an alcoholic, who somehow manages to hold on to his job as an advertising executive, but also a negligent father to his young daughter, Mia, who lives with his ex-wife Donna (Hannah Ware).

On the night of Mia's third birthday, in 1993, Joe hits on his client's girlfriend at a dinner meeting, is rebuffed, and goes on to become increasingly drunk. After his friend Chucky (Michael Imperioli) closes his bar and refuses to let him in, Joe chats up a woman with a yellow umbrella, in the hope of getting into her bed.

He wakes up with a hangover in a motel room, and eventually realises that not only is he alone, but that he is locked in. A screen serves as a virtual window, the visual on which changes from day to night and back again every 12 hours or so. The room also has a television, and for the next 20 years, that is his only contact with the passage of time.

He discovers that Donna was raped and murdered, and that he is the sole suspect. A crime show keeps him updated on the progress of Mia, who has been adopted by a homely couple, and he learns that she is a cello player. After spending years lamenting his fate, he finally decides to get in shape, vowing to escape someday and make it up to his daughter.

When he is suddenly released in the middle of a field, Joe follows a woman with a yellow umbrella, looking for answers. He then meets Marie Sebastian (Elizabeth Olsen), a nurse of a mobile clinic, and she gives him her card. Joe then lands up at Chucky's, but he collapses with dehydration, and his friend calls Marie, whose card he finds in Joe's hand. Once he recovers, Joe decides to begin his search for the truth by locating the restaurant from where his food (dumplings) was delivered for 20 years, and a curiously fascinated Marie decides to help him.

Spike Lee stays true to the original movie, almost, but he adds nothing new or compelling that can make the American version a cult or classic film. In fact, the unauthorised Indian remake by Sanjay Gupta, Zinda, had more soul (even though Gupta had changed the plot to suit Indian moral sensibilities).

The screenplay moves from one incident to another in an almost mechanical manner, and the lack of emotion is jarring, to say the least. Even the relationships between the characters are not well defined, and the villain becomes a caricature for whom you feel nothing, not even hatred.

This absence of passion and chemistry in the movie makes it rather tiresome, and at almost two hours in length, Oldboy gets a little tiresome. The climax and the closure, when they finally get there, are disappointingly shallow, and leave you feeling cheated, especially after you try to maintain an interest in Joe's fate.

Josh Brolin is marvellous as the drunken and lecherous pest, but the moment his character gets a grip on himself, you find yourself distancing yourself from him. He is not convincing enough, and neither is his transformation.

Samuel L Jackson is wasted, and one wonders why he accepted this role. Sharlto Copley is irritating, to say the least.

Elizabeth Olsen is always a delight, but her role is so badly sketched that she herself looks dazed and confused most of the time. Michael Imperioli is sincere, but again, has to do his best with a character that does not have much to do.

The setting of the film is not clear, and of course it is the USA, but it does not play much importance in the film. What could have been an intriguing backdrop is sadly wasted ??" the place where Joe is held prisoner, for example, has no character, unlike the original movie.

The costumes are mostly black and grey, and there is absolutely no reason to be dressed like that, except for effect.

The cinematography is average, as is the editing, although the repetitive element could have been avoided had the editor concentrated on crispness. The music is forgettable, and does not add much to the story.

Oldboy is disappointing, true, but the resolution, despite being so ambiguous, leaves you with an impression, if only for a short while. Watch only if you are a fan of the original, so that you can compare the shortcomings of the Spike Lee film.
Share. Save. Connect.
Tweet
OLDBOY SNAPSHOT

ADVERTISEMENT
This page was tagged for
Oldboy english movie
Oldboy reviews
release date
Josh Brolin, Elizabeth Olsen
theatres list
Follow @fullhyderabad
Follow fullhyd.com on
About Hyderabad
The Hyderabad Community
Improve fullhyd.com
More
Our Other Local Guides
Our other sites
© Copyright 1999-2009 LRR Technologies (Hyderabad), Pvt Ltd. All rights reserved. fullhyd, fullhyderabad, Welcome To The Neighbourhood are trademarks of LRR Technologies (Hyderabad) Pvt Ltd. The textual, graphic, audio and audiovisual material in this site is protected by copyright law. You may not copy, distribute, or use this material except as necessary for your personal, non-commercial use. Any trademarks are the properties of their respective owners. More on Hyderabad, India. Jobs in Hyderabad.