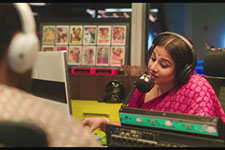 T J Reddy / fullhyd.com
EDITOR RATING
6.0
Performances
Script
Music/Soundtrack
Visuals
8.0
6.0
5.0
7.0
Suggestions
Can watch again
No
Good for kids
No
Good for dates
No
Wait for OTT
No
Have you been a great student for the longest stretch and then failed an exam in school or college? Well, I have. One of two things happens to you once you experience failure for the first time.

1. You take it in stride and stay on the path that has brought you success many a time.

2. You double down and try to find ways to win in every aspect of life, no matter how big or small. You decide to make success a habit all over again.

There are a third kind of people who choose to say **** this **** and drop out of school/college to either become Bill Gates or gatekeepers whose job it is to sort through some bills but they aren't the focus here so let's not talk about that.

Sulochana aka Sulu is a person of the second category. A charming and affable woman haunted by her multiple failed attempts at clearing 12th, Sulu competes for victories in everyday life. She is a runner-up in a lemon-and-spoon race, a winner of the residential society's Best Mom contest, winner of many pressure cookers and utensils in random events hosted by radio shows and so on. Sulu is the bright and chirpy person most of us want to be.

However, she is at an understated crossroads in her life. Her husband Ashok (Manav Kaul) is working a dead-end job, and her only son Pranav (Abhishek Sharma) has reached an age where he distributes naughty magazines and watches Baby Doll for "pleasure". And she herself is too driven to be content just cooking roti-sabzi.

A fortuitous sequence of events results in Sulu landing herself a job as the host of late-night, sultry, Saadi-waali-bhabhi radio show, Tumhari Sulu. A famous comic book Bhabhi reference is strong with this one. Soon after, the homely woman trades in her trademark "mein kar sakta hai" for a sensual "hello", and with that starts the dragging second half whose screenplay fails to do justice to its star's unyielding charisma and flawless performance.

All through its first half Tumhari Sulu is as joyous and endlessly watchable as its lead actress. Even though the storytelling is somewhat by-the-numbers, the movie sinks its teeth into Sulu's home life and personal aspirations quite engagingly. The very personal conversations between Sulu and her husband showcase writer/director Suresh Triveni's talent for etching characters on screen. The film breezes through this half powered by a current of comedy. The writing humanizes Sulu, her family, her struggles and her hopes while fleshing her world out to a high degree.

However, there the convoy of conveniences that begins with the second half makes the film repetitive. There are a sappy emotional melodrama involving a disgruntled husband, a lost boy son, a few job problems and family theatre, which make for tedious viewing, and get you wondering where all the ingenuity of the first half evaporated.

Taking the good with the bad with an unwavering smile and an unshakable faith in this underwritten material (God, I love alliterations) is star Vidya Balan who again stands out with her characteristic impeccable acting. The actress shows how she in a league of her own as she pulls things along every time the movie drags itself down by the weight of its own self-importance or hackneyed writing, smashing every scene she is given out of the park. Also, for perhaps the first time ever, Balan's dusky vocals are put to good use by a film - who knew she could pull this off?

Acting as a foil to her effervescence is the equally competent Manav Kaul. The man runs through a gamut of emotions over the two-hour twenty-minute runtime, and like his female counterpart, works at improving some admittedly stale material with expressive body language and the chemistry he shares with her.

The production design is immaculate. The relatively tiny apartment the nuclear family lives in has paint peeling off the walls, chargers hanging out of power outlets and clothes drying on window grills. However, these dour living conditions are shot gorgeously, almost like a metaphor for the positive influence Sulu has on her family. However, the music accompanying their journey lacks consistency - as we at fullhyd.com always say, too many musicians spoil the melody.

Watch Tumhari Sulu for the embodiment of brilliance that is Vidya Balan, who is single-handedly worth the price of entry.
Share. Save. Connect.
Tweet
TUMHARI SULU SNAPSHOT 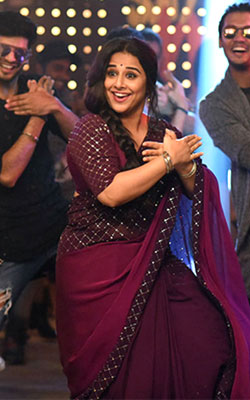 ADVERTISEMENT
This page was tagged for
tumhari sulu movie
Tumhari Sulu hindi movie
Tumhari Sulu reviews
release date
Vidya Balan, Manav Kaul
Follow @fullhyderabad
Follow fullhyd.com on
About Hyderabad
The Hyderabad Community
Improve fullhyd.com
More
Our Other Local Guides
Our other sites
© Copyright 1999-2009 LRR Technologies (Hyderabad), Pvt Ltd. All rights reserved. fullhyd, fullhyderabad, Welcome To The Neighbourhood are trademarks of LRR Technologies (Hyderabad) Pvt Ltd. The textual, graphic, audio and audiovisual material in this site is protected by copyright law. You may not copy, distribute, or use this material except as necessary for your personal, non-commercial use. Any trademarks are the properties of their respective owners. More on Hyderabad, India. Jobs in Hyderabad.