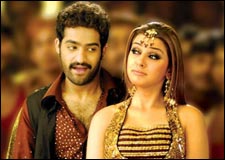 EDITOR RATING
7.5
Performances
Script
Music/Soundtrack
Visuals
8.0
5.0
8.0
7.5
Suggestions
Can watch again
Yes
Good for kids
No
Good for dates
No
Wait to rent it
No
You can actually call NTR cool now.

One of the most dramatic overhauls of Tollywood appears complete, and how. A bulky young man with a bass-less voice who seemed permanently destined for the masses of interior Andhra now appears like he'll soon be a trendy urban youth pinup a la Mahesh and Allu Arjun, and perhaps (gasp) even adorn the walls of teenaged girls' rooms. Indeed, don't be surprised if you see him in a cola commercial sometime soon. From Simhadri to style icon, that's some transformation.

Kantri is a new-NTR special, and his screen presence is formidable, especially given an almost diminutive frame now. He looks good, he dresses pretty well for Tollywood standards, and, of course, he can act, and between these three, there's a magnetic effect whenever he's on screen. He plays Kranti, an orphan who's grown up and is living in an orphanage, and joins the mafia gang of Pothuraju (Prakash Raj) and Seshu (Ashish Vidyarthi).

He quickly makes an impression there with his heroics with rival gangs, but when Seshu once refuses to give him money for a surgery for one of his orphanage's inmates, he quits and starts a gang of his own, and takes a contract to eliminate Pothuraju. And just as he is about to kill the latter, it then turns out that Pothuraju is the father who left him and his mother when he was a kid.

Kantri is a self-professed violent movie - the censor certificate shows just how violent, with details of the dozen or so scenes of violence that have been cut. Including 40% of the climax. That's right, 40% - and what you see is still obscene butchery, so imagine what must have been there originally. By all accounts, us and the Tamilians are the only bunch left in this country (and perhaps in the world) that still enjoy such sordid gore, and it doesn't look like it will change anytime soon.

NTR is completely in his element, with the trademark irreverent smirk showing supreme confidence. However, many times when NTR does a character in a movie, it somehow seems to appear like a sequence of (mostly well-enacted) scenes rather than a character coming to life. There's something going wrong somewhere, and it's perhaps that it's all a little too loud. Which perhaps is the result of a focus on giving him scenes to show off dialogue delivery skills rather than developing a character with many nuances.

Indeed, maybe NTR should start doing a different genre of movies â€" like say romances â€" where there is much more subtlety required, and many times a lot has to be said without opening the mouth. His next mass movie after that then is bound to bring a character to life much better.

Expectedly for a superhero movie, the woman has very little to do. Hansika plays Varalakshmi (which incidentally is the kind of name you're quite likely to find in NTR movies that are unabashedly uncosmopolitan), a girl built on an innovative concept â€" all her good luck gets transferred to someone if she kisses him, and she has to kiss him again to get it back. There could've been more there, but she's merely a prop in a movie that's all about testestorone.

The songs are good, and NTR dances up a storm as usual. The first half of the film is pretty gripping, and as is the Tollywood norm, the movie cannot stay as interesting in the second. But that's only relative, and NTR's looks and star power add a lot of charisma to a movie which already has the prescribed dose of violence in Tollywood. If that's what floats your boat, this one is completely for you.
Share. Save. Connect.
Tweet
KANTRI SNAPSHOT

See Kantri full details
TOP COMMENT
kasetty on 10th May 2008, 2:19pm | Permalink
is film making about names, it is so and so's film. so and so directed the film. he was assistant to so and so...
dont we need a story to start with. a decent enough plot, a good screen play.
why are these so called big film makers dont capitalise on the openings they get because of these stars, spend some money and get a good script to start with.
why are these people taking the audience for granted.
Kantri is such a let down... nothing to talk about.
no one needs to coment on NTR, he is a proven actor, but where is the god damn story...
please wake up you film makers, please... make some sence with the crores of rupees you are spending..

A suggestion for Junior NTR: You have got a very good action talent. Try to grow with your talent. Why do you want to take the name of your grandfather? Learn something from Nagarjuna. We are not watching your movies because of your grandfather. We watch the movie for its story and the action in the lead roles. Try to improve your action. Remember you are not a born actor. You have to improve a lot.

For Director: Don't direct any movie in the stupid fashion.

For Music director: konchem sonthagaa aalochinchu. copy lu vaddu. you have a lot of classical indian ragas which can be converted easily into modern film music.


RATING
1
the_juggernaut on 2nd Jun 2008, 7:15pm | Permalink
Seeing fullhyderabadi review, got impressed n watched.To the contrary,the film comes out to be a dudd.Reviews shud guide the viewers in rite way not misleading them by exaggerating for nothin worth. Complete lift from pokiri and munna.Lacklustre comedy accompanied by contrived dialogues adds fuel to the fire.Music n NTR action to some extent is the only saving grace.Watch it whn u dont get tickets for other movies.


Pros: music
Cons: Comedy
boylover007 on 21st May 2008, 1:35pm | Permalink
I think now NTR should do some cosmo romantic and family films with no violence to become a super star.
RATING
5
sandeepjakkaraju on 20th May 2008, 8:13am | Permalink
much better than the movies Jr. NTR has done beofre...script is pretty good....and one would not get bored at any point in the movie...except for some scenes with the heroine....
RATING
7
m_mrk on 13th May 2008, 9:32pm | Permalink
NTR had done his best in dances and fights, his costumes are cool. But coming to his slim looks hi face lacks energy. Now coming to cinema first half is okay, but the second half is dragging and big bore. can watch only for songs and second fight.


Pros: NTR and songs
Cons: every thing
RATING
2
aarti4u on 12th May 2008, 12:48am | Permalink
there are some things we expect from a telugu film, and possibly with the exception of enoughg comedy, this film has most of it. ntr is the next superstar.


Pros: ntr's looks
Cons: length
abhijeet007 on 10th May 2008, 4:53pm | Permalink
You finicky fans of Chiru will not allow any new talent to emerge. You believe that there is no talent in the world other than Chiranjeevi family. When will yo change... A day will come when a movie will be made using a DOG from chiru's house in a lead role and still you will come out of theatres, saying whaooou what a movie... That Chiru's dog has an extraordinary talent of dialogue delivery (Bhaaaau Bhaaaauuuuu). Change your minds guys.. accept the fact that JR NTR has all the stuff to become a super star of this industry...
kasetty on 10th May 2008, 2:19pm | Permalink
is film making about names, it is so and so's film. so and so directed the film. he was assistant to so and so...
dont we need a story to start with. a decent enough plot, a good screen play.
why are these so called big film makers dont capitalise on the openings they get because of these stars, spend some money and get a good script to start with.
why are these people taking the audience for granted.
Kantri is such a let down... nothing to talk about.
no one needs to coment on NTR, he is a proven actor, but where is the god damn story...
please wake up you film makers, please... make some sence with the crores of rupees you are spending..
RATING
2
viru4u on 9th May 2008, 8:26pm | Permalink
very routine flick

ADVERTISEMENT
This page was tagged for
Kantri telugu movie
Kantri reviews
release date
N T Rama Rao (Jr), Hansika Motwani
theatres list
Follow @fullhyderabad
Follow fullhyd.com on
About Hyderabad
The Hyderabad Community
Improve fullhyd.com
More
Our Other Local Guides
Our other sites
© Copyright 1999-2009 LRR Technologies (Hyderabad), Pvt Ltd. All rights reserved. fullhyd, fullhyderabad, Welcome To The Neighbourhood are trademarks of LRR Technologies (Hyderabad) Pvt Ltd. The textual, graphic, audio and audiovisual material in this site is protected by copyright law. You may not copy, distribute, or use this material except as necessary for your personal, non-commercial use. Any trademarks are the properties of their respective owners. More on Hyderabad, India. Jobs in Hyderabad.