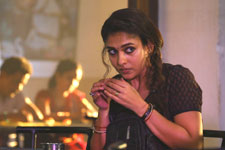 T J Reddy / fullhyd.com
EDITOR RATING
5.5
Performances
Script
Music/Soundtrack
Visuals
6.0
4.0
8.0
6.0
Suggestions
Can watch again
No
Good for kids
No
Good for dates
No
Wait to rent it
Yes
From times immemorial, movies have co-opted a certain deadly disease as a plot point. Fathers, mothers, sisters, brothers, friends, foes and lead characters themselves have been affected by various strains of this disorder. It pushed a passive Nagarjuna into both resigning himself to his fate and falling in love, and a pan-sexual Ryan Reynolds into becoming Deadpool. The real-life miracles of contracting cancer may be few and far between, but if you were to believe in the magic of cinema, it is as easy as contracting a cold, and usually leaves you with a half-decent story to tell.

But, one needs to be kept alive long enough to tell said story. That's exactly where Kokila (Nayanthara) comes into the fray. When her mother is diagnosed with cancer and slapped with a fast-approaching expiry date, Kokila takes it upon herself to earn the money required to keep her mother alive. As we know, get-rich-quick schemes are never the most honest of endeavours - so she goes from being a receptionist at a massage parlour to a cocaine mule, and soon her questionable line of work comes to the doorstep of her family. Does one upstart Nayanthara have what it takes to outsmart veterans of the drug trade who reside on both sides of the law? Well, you don't get the moniker of Lady Superstar by accident.

While most audiences are privy to the eventual outcome of the story, we tend to savour the journey more than the destination itself. And a dark comedy aimed at a mature audience has the potential to make for one hell of a journey. Then again, as many of us know, every trip to Goa that looks great on paper does not materialise with the same gusto. On paper, Ko Ko Kokila wanted to be a dark comedy with a tinge of drama added to the proceedings to ensure that the audience empathised with the "good guys". However, in the cold light of day, Ko Ko Kokila's dramatic element is in for a pound and not for a penny. This is only the launching pad for the constant state of dissonance permeating the movie.

Underneath the seemingly endless scenes depicting a poverty-stricken family, men ogling and attempting to bed Kokila, and Nayanthara's unchanging wide-eyed expression are a fantastic critique of our healthcare system, the male gaze and all that it overlooks, and a pitch-black comedy for the ages. These extremes rarely blend well, and Kokila, the character, is not rendered compellingly enough to act as the bridge between the aforementioned extremes.

Nayanthara the actress might be an anomaly in a sea of interchangeable faces, but her characterization in this particular film leaves a lot to be desired. Kokila is neither the unassuming femme fatale a la Subbu from Aranya Kaandam nor does she experience a full-blown character transformation of a person pushed to the brink of their morality akin to Kokki Kumar from Pudhupettai. Kokila is written to be the central character responsible for a multitude of well-crafted scenarios that increase in zaniness with the runtime of the film, but she herself remains a meek and doe-eyed poor girl whose half smiles of acknowledgement are not cathartic enough for an audience to fully connect with her journey.

On the contrary, Saranya Ponvannan experiences a character arc more in line with that of a black comedy. Her role shifts from that of a stereotypical mother dying of cancer to one using the bad hand dealt to her in elaborate bluffs time after time with a sense of morbid joy. Watching the warm and motherly actress function as the lynchpin for some morally ambiguous actions is a sight to behold indeed.

Working in tandem with the movie's comedic talent is Anirudh Ravichander's delectable score. While the songs appear tacked on (and they are), the playfulness of the score adds immensely to the film's overall appeal. The word limit afforded for this review is not enough to adequately explain why using a flute as the instrument of choice to underline Kokila's actions is so ingenious. The film's visual presentation, however, actively tries to undermine the mood the music sets up. Those two statements had an abrupt sea change between them, didn't they? Well, hopefully that'll help in priming many of our readers to the experience of watching Ko Ko Kokila.

This is a movie that is feverishly at work at trying to undercut the intended impact it wants to leave. A dark comedy that won't let its star fully break bad (you know why this reference exists) is similar to what Stone Cold Steve Austin would call a one-legged man in an a**-whooping contest. The latter might earn some respect for his efforts, but he is not coming out of the fight fully intact.
Share. Save. Connect.
Tweet
KO KO KOKILA SNAPSHOT 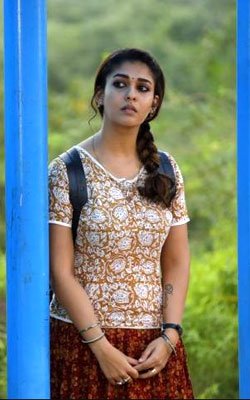 ADVERTISEMENT
This page was tagged for
ko ko kokila telugu movierulz
ko ko kokila movierulz
ko kokila
ko ko kokila movie in telugu
Koko kokila movie online
Follow @fullhyderabad
Follow fullhyd.com on
About Hyderabad
The Hyderabad Community
Improve fullhyd.com
More
Our Other Local Guides
Our other sites
© Copyright 1999-2009 LRR Technologies (Hyderabad), Pvt Ltd. All rights reserved. fullhyd, fullhyderabad, Welcome To The Neighbourhood are trademarks of LRR Technologies (Hyderabad) Pvt Ltd. The textual, graphic, audio and audiovisual material in this site is protected by copyright law. You may not copy, distribute, or use this material except as necessary for your personal, non-commercial use. Any trademarks are the properties of their respective owners. More on Hyderabad, India. Jobs in Hyderabad.