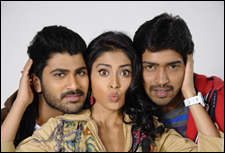 Deepa Garimella / fullhyd.com
EDITOR RATING
4.5
Performances
Script
Music/Soundtrack
Visuals
7.0
3.0
5.0
6.0
Suggestions
Can watch again
No
Good for kids
No
Good for dates
No
Wait for OTT
Yes
Nuvva Nena is the kind of film that seeks to remind you that even the most bankable of stars is, well, human. And more important, that comedy doesn't grow on trees. The makers of the movie attempt to be hilarious, but fall far short of what they set out to do.

This tale of 2 men fighting over one woman is as old as the hills, and there's no educated attempt here to breathe life into it. Avinash (Allari Naresh) and his sidekick (Ali) are petty thieves, who have run into a lot of money. Anand (Sharwanand) is a rich kid who suffers from some sort of phobia (of everything).

Avinash and Anand cross paths because they both fall in love with the same girl - the sleeveless-wearing, suggestively-walking doctor Nandini (Shriya). Now they don't tell us what doctor she is, but she basically treats Anand's phobia in one shot by hugging him in an elevator - but not before examining a scan of his brain and declaring to his father that "nothing is wrong with his brain".

The film, then, is about the two suitors getting the better of each other. Expect bee hives, failed brakes, attempts to murder, and Vimala Raman in a seductive song. An extended Brahmanandam - Kovai Sarla track does no good.

Probably the most obvious thing that is wrong with Nuvva Nena is that tries to be slapstick and cater to the masses, and that it doesn't go all the way there. Allari Naresh and his buffoonery seem intact here, but there's no material for him to chew on. Nuvva Nena has too many whitespaces where there ought to be quick laughs.

There's absolutely no logic in the plot, starting from Nandini's vague medical profession, to the endless, mindless one-upmanship by the two gentlemen. The pre-climax further disrespects your intelligence, and the movie's predictable ending is rather insipid, not helping the cause of the rest of the plot.

It's hard to say whether Nuvva Nena could have been a better movie. This is the kind of nonsensical plot that perhaps a stellar cast could have handled, with a lot more happening - in terms of comedy as well as song-and-dance.

Sharwanand tries his hand at slapstick, but he's not as effective as he ought to be. He gets to dance with a sultry-looking Vimala Raman, though. Shriya has nothing to do except look hot in her sarees. Hopefully, there's a paycheque for her in all this. Ali and Brahmanandam are both unfruitful, and Kovai Sarla is her usual self.

The songs are unimpressive, but the visuals are good. There are quite a few mass-y dances and songs that don't quite gel with the tone of the film.

This is not the Allari Naresh summer breather you were looking for. Skip this movie unless you have no options.
Share. Save. Connect.
Tweet
NUVVA NENA SNAPSHOT 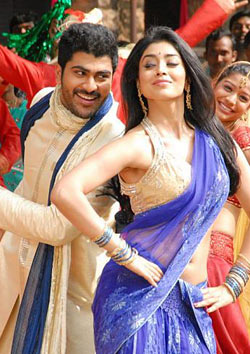 ADVERTISEMENT
This page was tagged for
nuvvanenatelugumovie
nuvva nena movi climax
Nuvva Nena telugu movie
Nuvva Nena reviews
release date
Follow @fullhyderabad
Follow fullhyd.com on
About Hyderabad
The Hyderabad Community
Improve fullhyd.com
More
Our Other Local Guides
Our other sites
© Copyright 1999-2009 LRR Technologies (Hyderabad), Pvt Ltd. All rights reserved. fullhyd, fullhyderabad, Welcome To The Neighbourhood are trademarks of LRR Technologies (Hyderabad) Pvt Ltd. The textual, graphic, audio and audiovisual material in this site is protected by copyright law. You may not copy, distribute, or use this material except as necessary for your personal, non-commercial use. Any trademarks are the properties of their respective owners. More on Hyderabad, India. Jobs in Hyderabad.