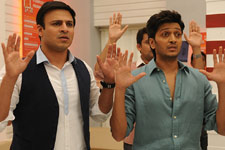 Swayamsrestha Kar / fullhyd.com
EDITOR RATING
3.0
Performances
Script
Music/Soundtrack
Visuals
3.5
3.0
2.0
3.0
Suggestions
Can watch again
No
Good for kids
No
Good for dates
No
Wait to rent it
Yes
An innuendo may exist in order to grease the deceptively tangled pathways of non-sexual foreplay, so that inter- or intra-gender flirtations are more fun to engage in. Or, it could be the passing seductive caress designed to stoke the fiendish fires of passion to a full-bodied frenzy, culminating in tangled sheets and steamy illicit memories. Else, it could be a ripe apple waiting to be bit into by a scantily-clad person, mostly of the female persuasion, while loud moaning sounds parade themselves as background music.

If the posters are anything to go by, Grand Masti most certainly uses the third kind of innuendo as the syntax, semantics, language and rhetoric of the speech that the makers of the movie read out by the graveside of that delightfully mischievous thing called "adult comedy".

Grand Masti is so bad a movie that we want to curse at it, but are held back by the fact that it will take quite a few days before we can even mentally recite our favourite swear words before cringing at the memory of how this movie ruined all of them for us.

Masti was a bit of a novel concept for its time, what with the three protagonists taking a detour around the heroic Amar-Akbar-Anthony trinity of honesty-fidelity-courage and doing a lecherous-cheating-cowardly Amar-Prem-Meet instead.v However, Masti wasn't a very good movie either.

But then, in a film industry which is no novice to stupidity of staggering levels, it wasn't long before director Indra Kumar convinced producer Ashok Thakeria to make a sequel and bring the lewd Lorenzos back.

Grand Masti begins with Amar (Ritesh Deshmukh), Prem (Aftab Shivadasani), and Meet (Vivek Oberoi) lecturing a pack of college boys about what the alphabets "A", "B", and "C" stand for in this world of female objectification, and the boys erm... lap it up with (disgustingly) drooling attention. We are led to believe that the trio, like all other college boys in India really, have a rollicking, dinky-donky sex life.

And if not physical, then they are at least visually gratified, what with almost all the girls in the college sashaying around in hot pants and bikini tops. Even the female teachers dress up in skimpy clothes.

Now, THAT is funny. No, seriously, these women live in India and (dare to) dress up like that? Such subtle irony, script-writers! We would actually be impressed if you weren't already scratching your heads and trying your damnedest to figure out what "irony" means and what possible connection your Crompton Greaves irons have to humour.

Moving on, six years later, Amar is married, and his wife is busy trying to deal with a baby (who we are told is the couple's son, but we doubt it because Amar shows exactly zilch amount of paternal affection towards the poor thing). Prem's wife is busy looking after his family, and Meet's wife is busy tending to her career.

All of these women are somehow made out to be flawed in their ambitions to cater to the needs of their child, their in-laws and to their own aspirations, while their husbands merely sulk, pout and lounge around, and fantasize about getting some.

So when there's a college reunion and the imminent prospect of gleeful unscrupulous adultery, the three of them drop everything and rush to their alma mater, all leery and lasvicious.

There, they run into the evil principal Robert (Pradeep Rawat), and his wife, daughter and sister - Rose, Mary and Marlo. Yeah, the Hindi-speaking audience got this joke fairly quickly, and guffawed at it dutifully... till they got tired and stopped.

Amar, Prem and Meet set upon these women like a pack of measly canines, and before you can say "Who let the dogs out?", songs are being sung in the rain, and the beds are creaking.

Trouble arrives in the form of a blackmailer (this time around, there are MMS videos, instead of mere photos, like in Masti), an angry Robert, baying for (instead of their blood) a precise anatomical part from these three men, and of course the wives.

Pardon us if we cannot get past the fact that the movie so liberally uses the idea of ogling women and their body parts as both pasture and fodder for its... limp jokes. We also cannot help but despair at the fact that the three leads seem to have forgotten that they have turned in better performances in other movies, and that they can can actually act.

The songs are torturous, and the editing is terrible. The other actors are wooden, insipid and so not funny. The women (notice how we mention them differently from "actors", since they only appear as props) are clueless about emoting, and stick to the stripping and the sashaying.

We can't really blame them for it. You can't exactly turn in an Oscar-worthy performance if you're just expected to pout seductively at the camera, and to speak in husky tones. Oh wait, you can. But then, you've got to be Madhubala. Or Julia Roberts.

Grand Masti may taste success at the box office, merely because there aren't other exciting releases around. But it still remains a terribly soggy movie. No pun intended.
Share. Save. Connect.
Tweet
GRAND MASTI SNAPSHOT 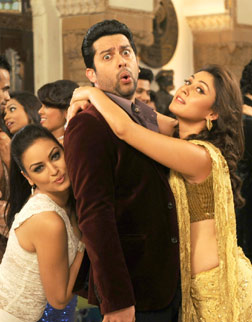 ADVERTISEMENT
This page was tagged for
Grand Masti hindi movie
Grand Masti reviews
release date
Vivek Oberoi, Riteish Deshmukh
theatres list
Follow @fullhyderabad
Follow fullhyd.com on
About Hyderabad
The Hyderabad Community
Improve fullhyd.com
More
Our Other Local Guides
Our other sites
© Copyright 1999-2009 LRR Technologies (Hyderabad), Pvt Ltd. All rights reserved. fullhyd, fullhyderabad, Welcome To The Neighbourhood are trademarks of LRR Technologies (Hyderabad) Pvt Ltd. The textual, graphic, audio and audiovisual material in this site is protected by copyright law. You may not copy, distribute, or use this material except as necessary for your personal, non-commercial use. Any trademarks are the properties of their respective owners. More on Hyderabad, India. Jobs in Hyderabad.