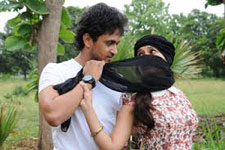 Kritika Deval / fullhyd.com
EDITOR RATING
1.0
Performances
Script
Music/Soundtrack
Visuals
2.0
1.0
3.0
3.5
Suggestions
Can watch again
No
Good for kids
No
Good for dates
No
Wait for OTT
No
So, a while into the film, you are shown a series of inconclusive interrogations our hero/criminal is subjected to, which result in the interrogator talking to his superior about how girls sometimes play fast and loose, and force boys to turn to "criminal" activities. Since the criminal activity in question is an acid attack, we assume that the filmmaker is merely commenting on the Neanderthal nature of our police, and wait for him to show us via his movie that he doesn't actually believe that girls might actually deserve having acid thrown in their faces.

Then we watch the movie further, and we realise to our horror that our hero Seenu (Manoj Nandan) is a stalker and our heroine Bindu (Priyanka Pallavi) is a sociopath, and that we are supposed to sympathise with them, and that there are songs written in that do not have any meaning unless we sympathise with the characters, and that this world is a much, much worse place for having this movie in it.

Let's get the story first. So, basically, from what we could glean during this awful assault on our senses, Seenu is a wedding videographer's assistant who fell for Bindu in the idyllic village of whatever. They start a puppy romance that is about as convincing as a story of actual puppies conceiving a lasting passion for each other. Soon, though, Bindu's father falls ill, and she must move to Vizag with her family, but not before eliciting a promise from Seenu to come after her.

When he does get there, she willfully ignores him, resulting in the aforementioned stalkerish behaviour, up until he puts himself in a life-threatening situation resulting in him ending up at a hospital. Following this, Bindu does a miraculous 360-degree turn in her philosophy towards guys, and decides that someone following her onto the ladies room and manhandling her while inarticulately demanding an explanation is way creepy, but someone nearly killing himself over her for no apparent reason is worthy of her love.

Then, things get weird - and by weird we mean horrible enough to make us want to gouge our eyeballs out and do permanent damage to our eardrums.

For instance, one of Bindu's friends is a vaguely North-Eastern girl who is disappointed when a guy in a bus steals her purse instead of groping her. Then there is another friend who has to use a compass to defend herself against an old man groping her in a share auto. Yet another friend plays gang leader and is constantly saying awful things that we would rather not remember. Every single person in the movie physically hurts your brain in some way or another, and we can only conclude that Suneel Kumar Reddy just hates people.

The acting is highly amateurish, which makes sense because nobody with choices would have anything to do with this movie, easily one of the most unconvincing and unconvinced (the latter being a rare quality in even the worst of Telugu cinema) projects in a long while.

The production values are just as half-baked as the opinions in the movie, the costumes tasteless, and the camera work perfunctory. The music is middling for the most part, unless it is dipping down to bad levels.

Oka Criminal Prema Katha is a movie that should never have been made. Venture into theatres only upon medical guidance, and that, only if you absolutely have to.
Share. Save. Connect.
Tweet
OKA CRIMINAL PREMA KATHA SNAPSHOT 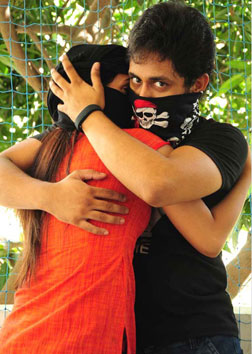