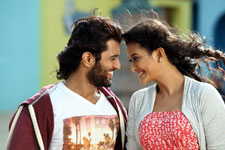 Josh / fullhyd.com
EDITOR RATING
4.0
Performances
Script
Music/Soundtrack
Visuals
5.0
7.0
6.0
5.0
Suggestions
Can watch again
No
Good for kids
No
Good for dates
Yes
Wait to rent it
Yes
It's like V V Vinayak met Rajkumar Hirani and they just couldn't understand each other. Well, there is the hurdle that Hirani doesn't speak Telugu, but the other major issue is that Vinayak doesn't speak Hirani.

Dwaraka is, in spirit, Munnabhai MBBS (gold hearted anti-hero) in a PK setting (fake godmen). Petty thief Erra Srinu (Vijay Devarakonda) gets mistaken for a godman and soon has a thriving business as Swami Krishnananda atop an apartment complex called Dwaraka. There is, of course, a girl involved. Srinu is in love with Vasudha (Pooja Jhaveri), and he keeps up the Swami pretense to establish contact with her. Trying to take advantage of his manufactured godliness are a criminal lawyer (Prabhakar) and a minister (Raghubabu) who set up a trust to siphon out the money being presented to the Swami.

Where it goes Munnabhai-ish is with the anti-hero turning out to be an actual hero doing good to people and touching hearts. Right down to the scene where he experiences distressing disillusionment realising that his pretense of powers (medical there, spiritual here) can't save a life.

It's actually a cool idea. Religion is often a messy terrain, and it doesn't hurt to write a script where the messy parts of religion end up in achieving human upliftment anyway. Dwaraka certainly manages to be that script, but it fails to be that film.

This is where we get to the V V Vinayak part of the bridge - the execution. Director Srinivas Ravindra isn't incompetent. But basic competence is no good for a script like that of Dwaraka. It works for a masala potboiler where you have enough and more references. You can exactly tell the cinematographer what kind of a WHOOOSH you want. You can get the re-recording to produce the exact kind of WHHOOOAH you want. The action choreographer will gladly flaunt new ways to defy physics, and the art director's already taking notes from Shankar's last few song sets. Garnish with an item number and two spoofs, and remember to serve your potboiler hot. Bon appetit!

Dwaraka needed something else, though. It needed a storyteller who can make you sensitize with the febrile religiosity of the common citizen. You need to feel the power of faith, the draw of love, the pangs of guilt, and joy of human kindness. With Dwaraka, you largely feel bored.

It doesn't help that the actors work in monotones. Vijay Devarakonda is picking great scripts but that doesn't automatically make him a great actor. He is way out of his depth in a film which called for some actual meditating on motivations. His speech has a slur of inebriation which works very well for a lout without responsibility (like the one he played in Pellichoopulu), but you really need such things as diction and gravity for a role where you're struggling with guilt and inspiration. Considering there are really few actors who speak the Telangana dialect naturally, Devarakonda's improvement in speech can truly expand the cultural soundscape in our films.

So what you have left are a great storyline, some good songs (Sai Kartik delivers a lovely "Bhajare Nandagopala Hare" with Chitra), a few intermittent jokes, and a solid supporting cast trying to make them work (Prudhvi is truly a star). That might still be a decent couple of hours if you don't bore easily.
Share. Save. Connect.
Tweet
DWARAKA SNAPSHOT 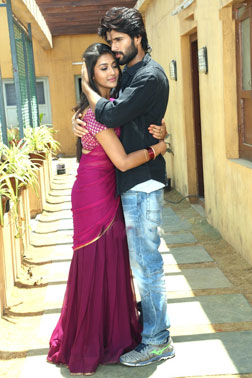 ADVERTISEMENT
This page was tagged for
Dwaraka movie in Telugu
Dwaraka telugu movie
Dwaraka reviews
release date
Vijay Deverakonda, Pooja Jhaveri
Follow @fullhyderabad
Follow fullhyd.com on
About Hyderabad
The Hyderabad Community
Improve fullhyd.com
More
Our Other Local Guides
Our other sites
© Copyright 1999-2009 LRR Technologies (Hyderabad), Pvt Ltd. All rights reserved. fullhyd, fullhyderabad, Welcome To The Neighbourhood are trademarks of LRR Technologies (Hyderabad) Pvt Ltd. The textual, graphic, audio and audiovisual material in this site is protected by copyright law. You may not copy, distribute, or use this material except as necessary for your personal, non-commercial use. Any trademarks are the properties of their respective owners. More on Hyderabad, India. Jobs in Hyderabad.