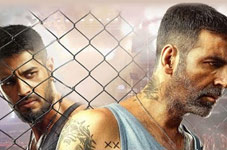 Nupur Barua / fullhyd.com
EDITOR RATING
4.0
Performances
Script
Music/Soundtrack
Visuals
6.0
3.0
5.0
6.0
Suggestions
Can watch again
No
Good for kids
No
Good for dates
No
Wait for OTT
No
From the days of unapologetic/blatant copying of Hollywood films to acquiring rights to an official remake, Hindi movies have come a long way. What has not changed, though, is the inability to not make a mess of it. Brothers, directed by Karan Malhotra and produced by Karan Johar (or Dharma Productions), is a Hindi remake of the very popular Warrior, by Gavin O'Connor. Like the original, Brothers, too, has its share of masala and mayhem, but loses track of itself pretty early on in the movie.

David (Akshay Kumar) and Monty (Siddharth Malhotra) are half-brothers. Their father Gary Fernandes (Jackie Shroff) used to be a terrible man, who not only treated them badly but was also accused of a murder. Having served time in prison, Gary now tries his best to reunite with his sons, and also to get them to reunite with each other.

But all in vain. Somewhere between childhood and adulthood, David and Monty have had a falling out. They used to be as close as two peas in a pod earlier, but the dysfunctional element in their family, thanks largely to their father, has torn them apart. David now teaches Physics, and is happily married to Jenny (Jacqueline Fernandez). They have a daughter, whose illness threatens darkness and gloom unless they can arrange for a fortune to tide over the bad times.

Monty is a rebel, of sorts. He is not interested in reconciling with the rest of his family, and neither for that matter is David. The re-entry of Gary into polite society has become a pain, because he is hell-bent on a reunion, which neither of his sons wants.

In the meantime, in an effort to earn some extra money, David participates in R2F (Right to Fight) events. His manager, Paasha (Ashutosh Rana), is sceptical at first, but through sheer grit, hard work and determination, David proves why men above 40 should not be ignored.

Things come to a head when Monty decides to participate himself in the biggest R2F tournament of all time, organised by Peter Briganza (Kiran Kumar). The prize money is almost Rs 10 crores, and both David and Monty are in dire need of some cash. The question then is - does any of the brothers have a chance of winning it, and will there be a face-off eventually to make worse an already bad relationship?

Brothers, as the name suggests, is about more than just sibling relationships or rivalry. It is filled with melodrama and copious tears. To be fair, Karan Johar is known for his penchant for causing his audiences to break into tears while he laughs all the way to the bank. Remember K3G? It is only fitting then that his namesake and prodigy, Karan Malhotra, emulates him. The problem is the overdose of the melancholy and the never-ending complications in the story. Add to that the lack of rules in R2F competitions (in the writer's version of an ideal world, we presume) and you have enough to make your head reel.

The original, Warrior, was a matter-of-fact narration of the lives of two estranged brothers who become competitors, with enough background inserted to make you take sides with one or the other. Brothers, with its clichés, redundant dialogues and lazy writing in the guise of intense drama, makes you wish you had never set eyes on the Fernandes clan. For example, the film portrays all Christians as cross-wearing, or cross-tattooed, people, who walk in slow motion out of churches, when they are not drunk (Indian Catholics are apparently all alcoholics, and also say "Man" multiple times in one sentence). The other communities shown in Brothers fare no better - case in point, heavily kohl-eyed Muslims.

Maybe the use of stereotypes has a purpose - maybe the makers wanted to put you at ease in a world that you are familiar with, or that you have a perception of. This dubious honest intention backfires, though.

The screenplay is determined to make you restless, especially in the first half. A lot happens in it, of course, but nothing that is compelling enough for you to want to follow it up. The second half is pure action, and some pretty decent choreography, accompanied by some clever cinematography. Indeed, the only reason you would want to watch this movie is because of the Mixed Martial Arts (MMA) fight sequences. Again, not all the action is worth it. In fact, some of the international fighters in the movie, including a Tibetan to represents China (somebody stop press!), are very unconvincing, and deserve to be mentioned in the list of movable props instead of in the list of actors.

Which brings us to the acting. Akshay Kumar looks slightly bewildered at finding himself playing an elder(ly) brother. His appearance and his performance are both striking, and it is hardly his fault that the script requires him to ham a bit. Siddharth Malhotra, on the other hand, struggles with his buffed body and his expressions (a total of two, to convey every human emotion possible).

Jacqueline Fernandez is required to look pretty, and to incite and entice Akshay Kumar. This she does with ease, and even seems pretty convincing as a mother of a pre-teen. Ashutosh Rana and Kiran Kumar, mostly the latter, light up the screen considerably. Shifaali Shah looks piqued, for some reason.

Crosses, tattoos, beefy men, blood, sweat, tears, and inexplicably violent action - that is Brothers, in a nutshell. We recommend a DVD of the original, which is now beginning to look an even better movie. 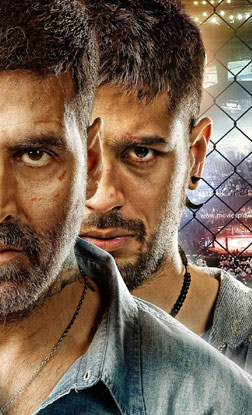 ADVERTISEMENT
This page was tagged for
???? ????? ????
hindi brothers review
Brothers (Hindi) hindi movie
Brothers (Hindi) reviews
release date
Follow @fullhyderabad
Follow fullhyd.com on
About Hyderabad
The Hyderabad Community
Improve fullhyd.com
More
Our Other Local Guides
Our other sites
© Copyright 1999-2009 LRR Technologies (Hyderabad), Pvt Ltd. All rights reserved. fullhyd, fullhyderabad, Welcome To The Neighbourhood are trademarks of LRR Technologies (Hyderabad) Pvt Ltd. The textual, graphic, audio and audiovisual material in this site is protected by copyright law. You may not copy, distribute, or use this material except as necessary for your personal, non-commercial use. Any trademarks are the properties of their respective owners. More on Hyderabad, India. Jobs in Hyderabad.