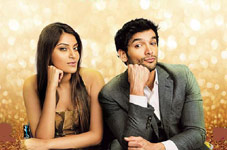 Nupur Barua / fullhyd.com
EDITOR RATING
3.0
Performances
Script
Music/Soundtrack
Visuals
6.0
3.0
5.0
6.0
Suggestions
Can watch again
No
Good for kids
No
Good for dates
Yes
Wait to rent it
No
Most dictionaries define "pulao/pulav/pilaf" as a "spicy rice dish". So when a movie has a variation of the same word in its title, the least you can expect is for it to be delicious, if not fiery hot. Wedding Pullav, therefore, raises expectations of plenty of sugar and spice, and all things nice, with lots of drama and comedy. And, unsurprisingly for a movie with relatively lesser known actors, does not quite live up to the hype.

In a reverse scenario from the Julia Roberts starrer My Best Friend's Wedding, Aadi (Diganth Manchale) wants to jeopardise a wedding - his own. He willingly agrees to an engagement party to celebrate his commitment to Rhea (Sonalli Sehgall), but realises halfway through the event that life is meaningless without his best friend Anushka (Anushka Ranjan) by his side. The latter arrives breathless from London, in time to egg Aadi on, and to announce some news of her own. She, too, is engaged, to nude painter Jay (Karan Grover), and is very excited.

In the flurry of excitement that follows, the elders of extended families decide that the two best friends should be married on the same day, in what was originally Aadi's wedding venue, Thailand. Since a wedding is just another party that can be arranged in a foreign country at the drop of a hat (or at whim), everybody goes to Thailand.

And it is in this beautiful location that Aadi realises that maybe he is in love with Anushka after all. This revelation, to self and then to the object of his affections, may rock the boat, however, and so the two best friends decide to let things lie low. While everybody else is busy planning the duo's weddings, to other people. With no plan or intention to move things forward, and after tons of self-pity and self-imposed tragedy, the two finally slip up and set tongues wagging. What will they do next, you wonder, and so do the filmmakers.

Which is where they introduce hotel manager Luv Kapoor (Rishi Kapoor), who moonlights as a love counsellor. Basically he is a wise man who has seen too much of life to sit back quietly when two lovers are headed toward disaster. He also doubles up as a motivational instructor, especially for the two silly lovers.

With a paper-thin storyline in which empathy for any character is minimal, Wedding Pullav is just another project to launch a star kid into the industry, and an opportunity for a television actor to show off his physique. You already know how it is all going to end, but you also realise that the journey is just not worth it. Great locations and some random music videos do not make a plot interesting. The script goes from one event to another, including a karva chauth, all of which will culminate in two big weddings.

In short, this pulao/pulav/pilaf is most unappetising. The humour is forced, the drama is inane, and the dialogues are dull. The only saving grace is the semblance of direction that Binod Pradhan displays in this, his directorial debut. Whatever little fun you experience in the movie is thanks purely to his sensibility in handling an otherwise defunct plot.

Debutante Anushka Ranjan is the daughter of Shashi and Anu Ranjan. And not a great actor. She is, however, now perhaps firmly in the radar of prospective producers, and things can get better provided she takes up some acting lessons. Diganth Manchale shows more promise, but the screenplay does not allow him to deliver. Sonalli Sehgal is better in the Pyaar Ka Punchnama movies. As for Karan Grover, well - he is the best actor of the lot, but not very impressive, nevertheless.

Rishi Kapoor sleepwalks through the role, and his disdain for it shows in his performance. He is, however, a welcome distraction from the monotony on the screen. Satish Kaushik is unexpectedly jaded, as is Himani Shivpuri. Kitu Gidwani and Parmeet Sethi are totally wasted.

The title Wedding Pullav has no relevance to the movie whatsoever. The film is yet another discouragement for aspiring filmmakers who may want to cast newcomers in their movies. At the rate that "small" films are going, we may as well patronise only blockbusters - they may have ridiculous stories, but at least the actors are worth watching.
Share. Save. Connect.
Tweet
WEDDING PULLAV SNAPSHOT 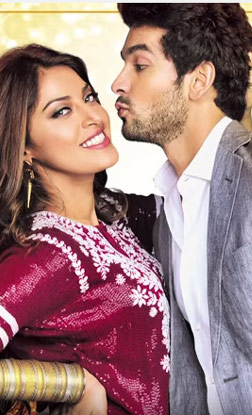 ADVERTISEMENT
This page was tagged for
Wedding Pullav hindi movie
Wedding Pullav reviews
release date
Anushka Ranjan, Diganth Manchale
theatres list
Follow @fullhyderabad
Follow fullhyd.com on
About Hyderabad
The Hyderabad Community
Improve fullhyd.com
More
Our Other Local Guides
Our other sites
© Copyright 1999-2009 LRR Technologies (Hyderabad), Pvt Ltd. All rights reserved. fullhyd, fullhyderabad, Welcome To The Neighbourhood are trademarks of LRR Technologies (Hyderabad) Pvt Ltd. The textual, graphic, audio and audiovisual material in this site is protected by copyright law. You may not copy, distribute, or use this material except as necessary for your personal, non-commercial use. Any trademarks are the properties of their respective owners. More on Hyderabad, India. Jobs in Hyderabad.