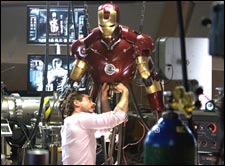 Samrat Sharma / fullhyd.com
EDITOR RATING
8.5
Performances
Script
Music/Soundtrack
Visuals
8.0
6.5
7.0
9.0
Suggestions
Can watch again
Yes
Good for kids
Yes
Good for dates
Yes
Wait to rent it
No
Call me a cynic, but walking into Iron Man, I began having these panicky thoughts about ways they could mess this up. Iron Man was one of my favorite superheroes, especially because he was all cool and zero angst among all the superheroes fighting their inner demons, and I was wishing hard director Jon Favreau doesn't fall into the standard origin story trap - too much existential dilemma. Oh, and the recent spate of dark and gritty superheroism (even our boy in blue Superman wasn't spared this treatment) also spelled doom for this character.

30 seconds into the film, and I forgot all my anxiety. Jon Favreau and his leading man, Robert Downey Jr., not only prove that they know what they're doing, they freaking nail it. Hard.

There are few action movies that have an electric flash of brilliance and affability that set them apart from the CG monstrosities heaved upon us every summer. Iron man has that in spades, and that's all because of a man called Bob Downey. Awards aren't handed out for movies like these, but I dare you to find a performance this year as electrically charged and as powered by sheer joy and charisma. Downey Jr. was the best asset Favreau could have hoped for - even more than the top notch job by the wizards at ILM - so much so that he has very rightly rested the complete film on this one man's buff shoulders. Downey gives a performance that is so hinged in the now, the immediacy of his spoken word, that it almost seems like he is making it up right in front of us.

Doing so makes Tony Stark the very character that most filmmakers and actors would have forgotten, making us believe (for real) in this impossibly witty and thoroughly likable dude who just happens to be on a big screen in front of us. Without much of a script to go on, he delivers a performance channeling our affection for him as an actor into the character that is an extension of himself, a lovable rascal for whom we can't help but cheer.

He finds the void in Stark's life and brings it alive on screen in the most remarkably matter-of-fact ways, keeping the Iron Man cool intact. His quirky personality that charges his performance also pervades through the whole cast, channeling that raw Downey energy and give us a supercharged ensemble.

Paltrow's humanity is crushingly delivered in every moment that she gets with Downey. Despite standard action movie tropes - the missed kiss, the worried girl, the damsel in distress - Paltrow really and truly acts these moments, making them that much more effective, and freshening up the entire screen despite the lines or the horrendous background score. Maybe it's just the fanboy in me, but I truly believe I saw Howard and Bridges deliver their best performances when around Downey.

Especially Bridges, who, despite the final act's cackling villainy, delivers each line with a slithering menace and obvious mastery. This is a man who owns the room, every time and without reservation. The strength of the cast and the very tightly controlled tone make the film's standard origin story that much more interesting and fun, which should be the benchmark for all origin films now. Get the right tone, and the screen will reward your storytelling.

For those who really must know, weapons manufacturer, maverick scientist, and billionaire playboy Tony Stark (Downey) is kidnapped by extremists in Afghanistan, and ordered to build a missile. He realizes what his weapons have wrought first hand, and builds the Iron Man suit (the clumsy but fan whistle-worthy Mark I). Escaping, he decides to use his wealth for good, angering his father figure Obadiah Stane (Bridges), who decides to stop him no matter the cost.

That, and Pepper Potts and Jim Rhodes is the whole film, really. Again, however, this is not what you see on screen. The tone of the film is note-perfect and relentlessly fun, and the considerable charm of Downey rubbing off on the cast just makes it double effective. There is fun, and the joy of discovery - the two building blocks on which Favreau mounts his film - and that works bloody wonders. Sometimes, just having a good time truly is enough.

To mention one specific, the most fun action sequences in the film are where we get to see Stark playing around with his suit and perfecting it, leading up to the moment we finally see the last Mark, the "hot-roddin' red". This is also pivotal to the film because Favreau has some distance to go before he becomes an accomplished mano-y-mano action director. The final act is almost perfunctory to the whole film, dealt with more surgical precision than the joy of seeing two guys in huge Iron suits duke it out in the street.

And that is good, because I have had my fun with the character of the cast and the tone of the film. If I just wanted half hour CG fisticuffs, I'd have rented Transformers. This might sound a bit effusive, but that is because Iron Man is not only a great translation of the character to film, it is one of the most fun summer actioners I have seen in a long time, and in my top five superhero movies easy.

Now what the fans want to read: Yes, the Iron Monger's here. Yes, there's a cameo by someone very cool as Nick Fury (wait till the end credits, please). Yes, the three Marks all make an appearance, and so does Jarvis, though not as you'd expect them to be. Though I can't wait for other billionaire playboy superhero this year, it is going to be tough to top this immensely gratifying film.
Share. Save. Connect.
Tweet
IRON MAN SNAPSHOT

ADVERTISEMENT
This page was tagged for
Iron Man english movie
Iron Man reviews
release date
Robert Downey Jr., Terrence Howard
theatres list
Follow @fullhyderabad
Follow fullhyd.com on
About Hyderabad
The Hyderabad Community
Improve fullhyd.com
More
Our Other Local Guides
Our other sites
© Copyright 1999-2009 LRR Technologies (Hyderabad), Pvt Ltd. All rights reserved. fullhyd, fullhyderabad, Welcome To The Neighbourhood are trademarks of LRR Technologies (Hyderabad) Pvt Ltd. The textual, graphic, audio and audiovisual material in this site is protected by copyright law. You may not copy, distribute, or use this material except as necessary for your personal, non-commercial use. Any trademarks are the properties of their respective owners. More on Hyderabad, India. Jobs in Hyderabad.