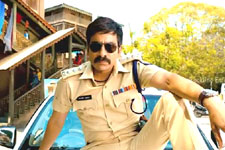 Ravi Kandala / fullhyd.com
EDITOR RATING
5.0
Performances
Script
Music/Soundtrack
Visuals
5.0
4.0
4.0
5.0
Suggestions
Can watch again
No
Good for kids
No
Good for dates
No
Wait for OTT
No
You hear frequently about software or corporate professionals complaining that their jobs are boring and that they do the same thing again and again every day. Looking at some of the actors in our movies, we wonder what they think about the same. We'll come to the lead actors in a bit, but first let's consider some of our character actors.

Take Ajay or Subbaraju for example. They turn up dutifully movie after movie to utter some threats while gnashing their teeth, get bashed up by the hero in myriad different ways, and either get arrested or killed at the end of the movie. Then take Pragati or Venniradai Nirmala or some of the other actresses. They turn up movie after movie, play the supporting mother doting on their child, cry a few buckets, and then either get kidnapped or wrangle their way into a climax shot featuring the entire crew. Don't these guys get bored?

Power is one of those movies that takes several of these actors and casts them in perfect stereotypes. When one of the actors shows up on screen and the shot ends showing a big smile on their face, you can guess from a mile away that the character will die in the next scene. When the heroine is walking towards the hero in slow motion and you see the hero get jittery about some impending attack, you know for sure that she will be sacrificed in the next shot. When one of the villains shouts at the hero twice or thrice, you know that he is next on the hero's hit list.

Coming to the lead actors, when the lead actor plays a cop who is said to have created a record in corruption across the state, you know that the film is inevitably hurtling towards a flashback in the second half. Ravi Teja turns up in two roles - one where he is a fun-loving ruffian whose only aim in life is to become a police officer, and another where he is a corrupt police officer (cue - sincere officer with a flashback which turned him corrupt). When the fun-loving ruffian takes the place of the corrupt cop, you know that he will goof up, hand the advantage over to the villain, and then come back to set things right.

The plot of Power is exactly the four lines written above. There are two heroines - Hansika Motwani and Regina Cassandra - who pad up the proceedings with some inane comedy and routine songs. The director plays an extremely safe game inserting some comedy, some action, some double-meaning dialogues and a whole lot of mass elements that are a staple in Ravi Teja films. There are absolutely no surprises, and the ones that the director thinks he's inserted cleverly into the screenplay make you cringe.

Ravi Teja looks old in the first half and young in the second. He has taken some care to ensure that his portrayal does not remind you of his role in Vikramarkudu. Motwani has lost oodles of weight, while Cassandra seems to be fast filling the vacuum created by the migration of Ileana to Bollywood. The rest of the supporting cast including Brahmaji, Brahmanandam, Sampath, Mukesh Rishi etc. do a fair job.

Thaman really needs to take a break. Listening to earsplitting beats of the dappu in every song is seriously not our idea of good music. The cinematography is inconsistent, and moves from very good to just there.

Power does not pack enough power for it to have a long run in the theatres. If you have nothing to do and are okay with watching a banal movie with half-decent comedy, this is your ticket to some A/C.
Share. Save. Connect.
Tweet
POWER SNAPSHOT 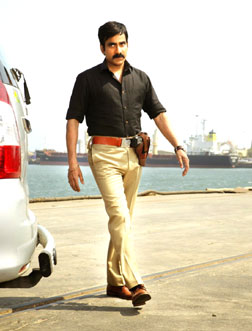 See Power full details
POWER USER REVIEWS
1 - 2 OF 2 COMMENTS
POSITIVE  |  NEGATIVE |  NEWEST  |  OLDEST  |  MOST HELPFUL  |  LEAST HELPFUL
USER RATING
5.0
2 USERS
Performances
Script
Music/Soundtrack
Visuals
NA
NA
NA
NA
Can watch again - NA
Good for kids - NA
Good for dates - NA
Wait for OTT - NA
shilpa on 8th Oct 2014, 6:51pm | Permalink
it's good, not only the dialogues but also the movie picturization, songs, hero ravitheja and heroine hansika, regina acting the locations also.
it's nice.
we can watch the movie especially the content of the story i mean about the corruption that is really true.now a days for every single work or for any little thing we have to pay more than the actual payment.
we have to be accept & support this kind of matters.
no one is trying to stop this all bad things but atleast we need to encaurage the people who is having a look on this.
Rajasekar on 23rd Sep 2014, 12:55pm | Permalink
When I hear dialogue "vanda number dial cheste policelu ravatledu raa, vanda note isthe vastunnaru", I had tears in my eyes. I cannot not say how pathetic it is, bull shit. Stop doing movies you bloody idiots. Learn from bollywood and tamil movie industry.
roopa123 on 8th Oct 2014, 2:00am | Permalink
Well Raj, i assume u are living in india and u r at least a graduate. Ask urself the following:
you haven't seen corruption in the society of ours?
Haven't you given even 100 rs for getting any document from bureaucratic office or you paying traffic police for any reason?
If u haven't then ignore my questions and ask yourself how can you change this attitude of our society rather than writing here with tears. Because that's the reality!!!
I don't vouch for the movie if you think i am fan by an chance. I simply cant see emotions in such matters and in particular dont want to see ignorant comments like these.
LEAVE A COMMENT
fullhyd.com has 700,000+ monthly visits. Tell Hyderabad what you feel about Power!
MORE MOVIES
Latest Reviews
Bhool Bhulaiyaa 2
Dhagad Saamba
Shekar
Jayeshbhai Jordaar
Sarkaru Vaari Paata
more
Doctor Strange In The Multiv...
Ashoka Vanamlo Arjuna Kalyan...
Runway 34
Heropanti 2
Acharya
Kanmani Rambo Khatija
Jersey (Hindi)
K.G.F. Chapter 2
Beast (Telugu)
Ghani
Contemporary Reviews
Creature (3D)
Finding Fanny (Hindi)
Finding Fanny
Aagadu
Daawat-E-Ishq
more
Khoobsurat
A Walk Among The Tombstones
Teenage Mutant Ninja Turtles...
If I Stay
Sin City: A Dame To Kill For...
Boochamma Boochodu
Mary Kom
Teenage Mutant Ninja Turtles...
Rabhasa
Random Reviews
Bhalevaadivi Baasu
Mummy - 2 (Telugu)
Bend It Like Beckham
Footpath
Page 3
more
Julie
Manasichhanu
The Happening
Wanted
Family Pack
The Adventures Of Tintin
Pyaar Ka Punchnama 2
Hindi Medium
Badhaai Ho
G-Zombie
SEARCH MOVIES
Dissatisfied with the results? Report a problem or error, or add a listing.
ADVERTISEMENT
SHOUTBOX!
{{todo.name}}
{{todo.date}}
[
ip{{todo.ip}}
]
{{ todo.summary }}... expand »
{{ todo.text }} « collapse
First  |  Prev  |   1   2  3  {{current_page-1}}  {{current_page}}  {{current_page+1}}  {{last_page-2}}  {{last_page-1}}  {{last_page}}   |  Next  |  Last
{{todos[0].name}}

ADVERTISEMENT
This page was tagged for
Power telugu movie
Power reviews
release date
Ravi Teja, Hansika Motwani
theatres list
Follow @fullhyderabad
Follow fullhyd.com on
About Hyderabad
The Hyderabad Community
Improve fullhyd.com
More
Our Other Local Guides
Our other sites
© Copyright 1999-2009 LRR Technologies (Hyderabad), Pvt Ltd. All rights reserved. fullhyd, fullhyderabad, Welcome To The Neighbourhood are trademarks of LRR Technologies (Hyderabad) Pvt Ltd. The textual, graphic, audio and audiovisual material in this site is protected by copyright law. You may not copy, distribute, or use this material except as necessary for your personal, non-commercial use. Any trademarks are the properties of their respective owners. More on Hyderabad, India. Jobs in Hyderabad.