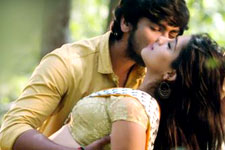 Sonali Dabade / fullhyd.com
EDITOR RATING
4.0
Performances
Script
Music/Soundtrack
Visuals
4.5
4.0
5.0
3.5
Suggestions
Can watch again
No
Good for kids
No
Good for dates
No
Wait to rent it
No
Almost every week there seems to come along at least one movie with the same old script but trying to do something different and ending up getting nowhere. In this age of avant garde cinema led by movies like Awe, these films end up dragging Telugu cinema back to where it has been for decades. Ratham is a perfect example.

Karthik (Geetanand), a righteous boy who helps everyone around him, lives with his family in a small village and works on his father's farm when not studying. Bujji (Chandni Bhagwanani) lives with her mother in the same village, and is being constantly harassed by a few eve-teasers. One day when things come to a head, she proposes to Karthik to get the men off her back. But Karthik actually falls for her and proposes to her, much to her indignant surprise. After a brief pursuit by him, Bujji accepts his proposal.

Meanwhile, a call money gang headed by Kalmani is terrorizing the people of the village. They lend money to the people at usurious rates, and when the latter cannot repay the loans, take away their children and make them work in bars and brick kilns. Karthik gets involved in this when he saves the boys from the kiln. At the same time, Bujji's father, a man similar to Karthik in beliefs and one who the village worships, is released from prison, and disapproves of Karthik. And Karthik now has to deal with a myriad of problems.

While the attempt to make a gritty, raw village love story is commendable, the execution falls flat on its face. In trying to position Geetanand as a romantic action-hero, the story loses credibility halfway through and soon becomes just boring. It's almost as if Karthik's love life and his life as a man fighting for a cause are being lived by two separate people.

Some scenes appear too forced and could have been done away with. For example, when Karthik learns from his friends that he has passed with distinction, he immediately says, "Let's drink!" Cue the hero's masculine way of dissing convention in the form of a grating song. There is no originality in many other scenes, with almost every frame being predictable as time progresses. Coupled with this is the unnecessary hype accorded to the hero and his fights. If things had been speeded up a little, maybe, just maybe, this could have been an average movie, if not a good one.

It would be charitable to say that the director loses track halfway through. The truth is that there is no clarity right from the beginning, with the characters being cruel parodies of good, gritty ones from older movies. At the end of the film, you are left waiting for resolutions to the background events, but they never come. It just leaves you feeling betrayed and wondering what just happened in there.

Geetanand tries hard to be convincing as a romantic hero and an action star, but it comes off as trying too hard. Chandni Bhagwanani as the bubbly village belle looks anything but that, and is a bad stereotype of a girlfriend from a man's perspective. Both of them act alright for a film they are debuting in, but while Geetanand manages to carry off a few good scenes well, Bhagwanani doesn't manage to stand out anywhere. The supporting cast is also filled with new faces, almost all inexperienced. They do what is told, but on the whole they only manage to put their heads just above the water.

The background score is unnecessarily loud and jarring on the ears. There are a couple of romantic songs that are sweet to listen to and the picturizations are beautiful, but the music (Sukumar Pammi) is in general rather forgettable. And the predictable placement of songs makes it an unwelcome experience in an already poorly executed movie.

The cinematography is passable at best, with only a few rare bright spots in the form of a couple of picturesque shots here and there. They quite surprise you by their appearances, but that's just about it.

All in all, Ratham is an ill-executed concept of yore that becomes boring in just minutes. If you're looking for a romantic movie, this is not your best bet.
Share. Save. Connect.
Tweet
RATHAM SNAPSHOT

ADVERTISEMENT
This page was tagged for
ratham movie images
Ratham Telugu movies
Ratham telugu movie
Ratham reviews
release date
Follow @fullhyderabad
Follow fullhyd.com on
About Hyderabad
The Hyderabad Community
Improve fullhyd.com
More
Our Other Local Guides
Our other sites
© Copyright 1999-2009 LRR Technologies (Hyderabad), Pvt Ltd. All rights reserved. fullhyd, fullhyderabad, Welcome To The Neighbourhood are trademarks of LRR Technologies (Hyderabad) Pvt Ltd. The textual, graphic, audio and audiovisual material in this site is protected by copyright law. You may not copy, distribute, or use this material except as necessary for your personal, non-commercial use. Any trademarks are the properties of their respective owners. More on Hyderabad, India. Jobs in Hyderabad.