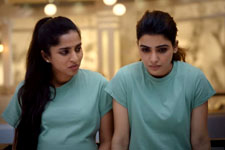 Sai Tulasi Neppali / fullhyd.com
EDITOR RATING
6.5
Performances
Script
Music/Soundtrack
Visuals
7.5
6.5
8.0
8.0
Suggestions
Can watch again
No
Good for kids
No
Good for dates
No
Wait for OTT
Yes
When I first watched the slick, well-cut trailer of Yashoda, I had a feeling the movie would function as more than just another thriller. I hoped it would perhaps trigger a long-overdue shakeup of women's roles in Telugu cinema. Or at the very least encourage scripts that make better use of that primal force of nature: female fury.

The trailer shows a woman, trapped inside what looks like a doomsday bunker, fighting unseen forces while visibly pregnant. It feels bold and intriguing. It has no prominent hero that swoops in and does all the saving.

But some of its scenes also felt vaguely familiar: so many women-led movies - Gone Girl, Invisible Man - are about trapped heroines symbolically or literally clawing their way to freedom. Maybe Yashodha was like Brie Larson's character in Room, kidnapped and impregnated by a pervert. Or maybe she was like Florence Pugh in Don't Worry Darling, fighting to escape a simulated jail erected by a male chauvinist.

The trailer was two minutes and twenty seconds full of possibilities. I entered the theatre expecting nothing less than a kickass flick from the reigning queen of Tollywood, Samantha.

It begins with a small-town girl Yashoda (Samantha) in dire need of money to pay for her sister's operation. She enters a surrogacy program called EVA, run by a charismatic woman named Madhu (Varalaxmi Sarathkumar). At first, EVA feels like paradise for its residents. Each of the hundreds of surrogates gets their own exquisitely-appointed room, access to all-you-can-eat buffets, and daily prenatal yoga classes.

But to the curious Yashodha, something is off. Eva feels like pregnancy jail - heavily surveilled by armed guards and wardens. Certain areas of the building are strictly forbidden. What happens to the women and the babies once the delivery is done is a lasting mystery. Yashodha's only friend on the staff is the gynecologist, Dr. Gautham (Unni Mukundhan) - friendly, shy, and sympathetic to the women's isolation.

As Yashodha noses around Eva's premises, another story is unfolding in the outside world. A group of police officers (led by Sampath Raj and Murali Sharma) are on the hunt to capture the person behind a string of murders. Their investigation centers around the identity of a secret ingredient in a bestselling anti-aging cream. It turns out that there is a mind-blowing connection between these murders and what's happening at EVA.

What's most frustrating about Yashodha's script is that mere minutes after it flashes the first clues about Eva's macabre purpose, the whole mystery comes undone. When Yashodha begins to grasp what's going on, the perpetrators are all too happy to sit her down and fill in the blanks, narrating the entire operation to her (but really, to the audience) using flashbacks, and not one but two - I kid you not?- Zoom presentations.

Director-writer duo Hari-Harish seem to have forgotten the cardinal rule of engineering a good thriller: that the lows - the quiet moments of terror - are just as important as the explosive highs. Their script is bombarded by unnecessary twists that kill the tension of the original premise. And rather than a tight, gripping screenplay, Yashodha is a collection of frayed threads loosely hanging to the larger story.

Take, for instance, all the obscure ways in which people are killed. Did you know that by removing silicon dioxide gas from the airbags you could set a car on fire? Or have you heard of Werner's syndrome which supercharges the body's aging process? Even something as commonplace as drug overdose is described using jargon as Combined Drug Intoxication: CDI. It is unclear how these pieces of trivia contribute to unraveling of the core theme of the movie.

There are other such issues, too, but for all its sins, the movie is still darkly stylish. The Eva building's sterile furnishings and its never-ending hallways leading into locked doors create a sense of airlessness that aptly captures the evil deeds occurring inside it. With Mani Sharma's background score, claustrophobia is all the more elevated. But the real fun bits are the fight scenes between Yashoda and her captors.

We rarely get to see a film heroine throw a punch, let alone a pregnant one. So it is incredibly satisfying to watch Samantha as Yashoda ravenously tears into men twice her size and finishes them off in the most awesomely gruesome way imaginable. This physicality is no doubt what attracted Samantha to this role - it is in these bloody scenes leading up to the finale that she does her best work. At most other times, her beauty - the poreless face, sculpted eyebrows, the Balayage hair - is too obvious for her to pull off her character as a hapless village girl.

Varalaxmi, though, is entirely convincing as Madhu Madam, the vain and coldly distant boss of Eva. By merely changing the curve of her eyebrows and the arc of her lips, she is able to toggle between being a sympathetic caretaker and a terrorizing sadist.

Yashoda deserves at least some laurels for its bold casting - two strong female characters - even if much of that "strength" is rooted in making its women act like men. But a good script would have done so much more to break the glass ceiling. 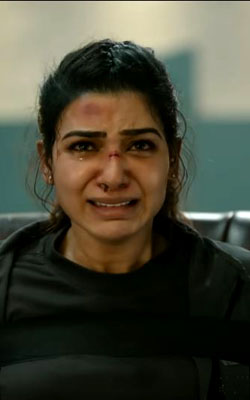 ADVERTISEMENT
This page was tagged for
Yashoda telugu movie
Yashoda reviews
release date
Samantha, Varalaxmi Sarathkumar
theatres list
Follow @fullhyderabad
Follow fullhyd.com on
About Hyderabad
The Hyderabad Community
Improve fullhyd.com
More
Our Other Local Guides
Our other sites
© Copyright 1999-2009 LRR Technologies (Hyderabad), Pvt Ltd. All rights reserved. fullhyd, fullhyderabad, Welcome To The Neighbourhood are trademarks of LRR Technologies (Hyderabad) Pvt Ltd. The textual, graphic, audio and audiovisual material in this site is protected by copyright law. You may not copy, distribute, or use this material except as necessary for your personal, non-commercial use. Any trademarks are the properties of their respective owners. More on Hyderabad, India. Jobs in Hyderabad.