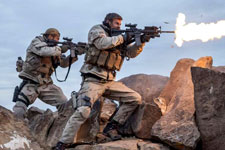 T J Reddy / fullhyd.com
EDITOR RATING
5.0
Performances
Script
Music/Soundtrack
Visuals
6.0
4.0
3.0
7.0
Suggestions
Can watch again
No
Good for kids
No
Good for dates
No
Wait to rent it
Yes
It's official, people - Hollywood will get as much cinematic mileage from the war on terror as it has from World War II. The stories write themselves. From poignant projects like Jarhead, The Hurt Locker and Three Kings to acting showcases like In The Valley Of Elah and Zero Dark Thirty to straight-up flag-wavy patriotic fodder in American Sniper and 13 Hours, the myriad of different stories that can be told about the never-ending geopolitical paradox will spin money for Hollywood for ages to come.

12 Strong falls into one of these categories, and as we know not all categories were created equal in terms of quality.

Former war photographer-turned-director Nicolai Fuglsig tells the story of the first set of CIA para-military forces, US Special Forces and USAF Combat Controllers sent to Afghanistan after the attack on the Twin Towers of the World Trade Centre on 9/11. These 12 angry men, with the aid of General Abdul Rashid Dostum, were tasked with eliminating Taliban strongholds in Afghanistan - a modern-day, real-life Seven Samurai, if you will.

Like Kikuchiyo and his band of blade-wielding warriors that graced the seminal Japanese film, Chris Hemsworth's Captain Mitch Nelson and Michael Shannon's Chief Warrant Officer Cal Spencer spearhead a clean-cut dozen of selfless soldiers who chose to walk into certain death to avenge a group of innocent people who were harmed by an evil foreign entity. Their intent is noble, their task is death-defying, their dedication is commendable, their action sequences are pulse-pounding, and their story deserves to be told.

But, their stories can't be as thematically simplistic as a playground version of Cowboys Vs. Indians - not at this point in time in history.

We live in a post-9/11 - or, from an Indian perspective, a post-26/11 - era. The global community at large has been waging a war on terror, and its ramifications are being felt by ordinary men and women the world over. Every action, be it by an ordinary citizen or by a high-ranking politician, is under a high level of scrutiny and is more politicized than need be. These complications beg not to be glossed over. And 12 Strong chooses to do exactly that.

This lack of depth translates to the characters as well. There is little in terms of the distinction between the heroic dozen, and that begins from scene one. While their collective outrage at the attacks is understandable, the fact that they merge into one single entity with similar arcs and motivations is not.

Every decent actor worth his weight has to be in both a comic book movie and a war movie. This goes for the big name actors in this film as well. We have Thor, General Zod and Ant-Man's best friend leading the line. While these men were perfectly cast to fit the spandex-clad protaganists, they seem slightly off-kilter when it comes to pulling off battle fatigues. Their profanity-laden military banter feels more staged than organic as their characters lack individuality and their group dynamic seems unearned.

This is also not helped by the fact that the Taliban never really poses a threat to the dirty dozen. They seem to have graduated from the Stormtrooper School Of Shooting At Things as they are incapable of landing a shot whether they have a machine gun, a bazooka, a Gatling gun or even a tank. There is just no tension here.

While this can be attributed to the writing, for the most part, the film's mediocre score deserves to shoulder some of the blame. Unlike that of Saving Private Ryan or Dunkirk where the sound of every bullet carried with it a sense of impending death and destruction, 12 Strong's firing feels more like an exercise in showing off phallic rage than anything else. The schmaltzy music underscoring the endless ammo being fired leads to sensory overload after a period of time simply because the film rarely switches up its combat sequences.

But director Nicolai Fuglsig's forte is not sound design, score, character work or film direction. He is a master of the visual medium owing to his background in photography, and his specifically designed frames reflect his real-world knowhow of war zones. The quiet and desolate landscape of war-torn Afghanistan is as masterfully captured as the horrifying bombing sequences of Taliban strongholds.

However, the visual aesthetic of the war-torn land seeps into the quaint suburbs the soldiers live in, too. A dusty, grey atmosphere on all fronts cannot show distinction or contrast between life on the battlefield and life on the home front.

Hence, to reiterate a previous sentiment, the film is too one-note for its own good. It is a competently-made war movie, but has little in terms of soul. In simpler terms, you don't see Desmond Doss from Hacksaw Ridge as Andrew Garfield and Captain John H Miller from Saving Private Ryan as Tom Hanks. They were full-fledged characters you empathized with and wanted to learn more about. All you'll remember from 12 Strong is that Thor, Zod and that dude who played Ant-Man's best friend fought terrorists and won. You won't see them as Mitch Nelson, Cal Spencer and Sam Diller, and that is the movie's biggest flaw.
Share. Save. Connect.
Tweet
12 STRONG SNAPSHOT 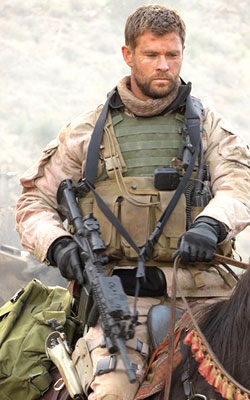 ADVERTISEMENT
This page was tagged for
12 Strong english movie
12 Strong reviews
release date
Chris Hemsworth, Michael Shannon
theatres list
Follow @fullhyderabad
Follow fullhyd.com on
About Hyderabad
The Hyderabad Community
Improve fullhyd.com
More
Our Other Local Guides
Our other sites
© Copyright 1999-2009 LRR Technologies (Hyderabad), Pvt Ltd. All rights reserved. fullhyd, fullhyderabad, Welcome To The Neighbourhood are trademarks of LRR Technologies (Hyderabad) Pvt Ltd. The textual, graphic, audio and audiovisual material in this site is protected by copyright law. You may not copy, distribute, or use this material except as necessary for your personal, non-commercial use. Any trademarks are the properties of their respective owners. More on Hyderabad, India. Jobs in Hyderabad.