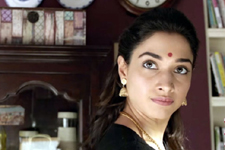 Jaiwantika Dutta-Dhupkar / fullhyd.com
EDITOR RATING
5.0
Performances
Script
Music/Soundtrack
Visuals
4.0
4.0
4.0
5.0
Suggestions
Can watch again
No
Good for kids
Yes
Good for dates
Yes
Wait for OTT
No
Tutak Tutak Tutiya is a horror-comedy in a time when "serious" horror films end up being unintentionally funny. It's different in that it's deliberately funny and has some intentional gags, although if you seriously consider the end result, it ends up shortchanging the viewer on both the comedy and the horror fronts. There's definitely more comedy than horror in this one, though - even if the jokes aren't first-class.

Krishna (Prabhudeva) is an upwardly mobile executive keen on marrying a woman who's tailored to suit his ambitions. In an unexpected twist, he's married off to Devi (Tamanna), a sweet, unambitious homebody who tries hard to please her husband. Trouble brews when the couple shift to Mumbai and take up residence in a flat haunted by the spirit of a deceased film aspirant Ruby, who promptly possesses Devi leading to a series of bizarre events.

Ruby is the diametric opposite of Devi and has the hots for Raj Khanna (Sonu Sood) who seems to reciprocate rather enthusiastically, getting Devi's body and Krishna entangled in a rather messy affair. Eventually, Krishna impregnates Devi's body, and ends the Raj-Ruby love story and the haunting as well.

Tutak Tutak Tutiya may have sounded good at the drawing board stage, but its direction (A L Vijay) fails to impress. Tamanna's goody-two-shoes village bumpkin act is cute, but too stereotyped to be real, and you wonder why it was necessary to piggyback off cheap stunts like her striptease at a party, or the unimpressive ménage-a-trois fiasco between the leads. The women play scarily one-dimensional characters. Devi, who's quite enamoured by Raj Khanna herself, never considers leaving her horrible husband or aborting the child that Krishna got her pregnant with. That would be too "Rubyish", so why would she? Essentially, Devi and Ruby both end up on the short end of the stick by the end of the film.

There are some touching moments in the film, like when Ruby realizes her dream of starring opposite Raj Khanna and becoming a film star. For Devi, who's unacknowledged and unwanted by her own husband, Ruby's drive is a welcome change. Krishna develops a possessive streak for Devi when Ruby becomes an actress, not out of concern for her well-being, but because she's "his" wife, and therefore his property. The film has a rather abrupt ending, just when things are beginning to pick up pace, with Ruby/Devi getting her good news at the hospital.

The film's cinematography (Manush Nandan) is nice, but the songs (Sajid-Wajid) and choreography are nothing to write home about. Sonu Sood is about okay as Raj Khanna, and Prabhudeva as Krishna garners a few laughs as well, although he doesn't dance much. Tamanna had ample scope to perform but ultimately doesn't - she does an average job.

Tutak Tutak Tutiya tries to get too much into one film and fails utterly. It might even have been embarrassing to watch if a hundred other similar films hadn't already been made in the past. In any case, it's totally not worth your while.
Share. Save. Connect.
Tweet
ABHINETRI SNAPSHOT 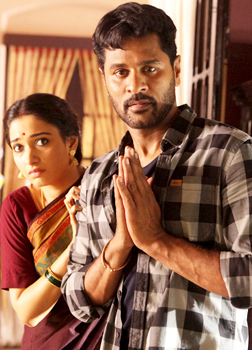 ADVERTISEMENT
This page was tagged for
Abhinetri telugu movie
Abhinetri reviews
release date
Prabhudeva, Tamannah Bhatia
theatres list
Follow @fullhyderabad
Follow fullhyd.com on
About Hyderabad
The Hyderabad Community
Improve fullhyd.com
More
Our Other Local Guides
Our other sites
© Copyright 1999-2009 LRR Technologies (Hyderabad), Pvt Ltd. All rights reserved. fullhyd, fullhyderabad, Welcome To The Neighbourhood are trademarks of LRR Technologies (Hyderabad) Pvt Ltd. The textual, graphic, audio and audiovisual material in this site is protected by copyright law. You may not copy, distribute, or use this material except as necessary for your personal, non-commercial use. Any trademarks are the properties of their respective owners. More on Hyderabad, India. Jobs in Hyderabad.