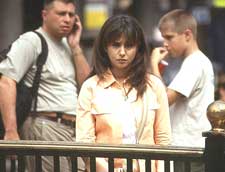 EDITOR RATING
5.0
Performances
Script
Music/Soundtrack
Visuals
NA
NA
NA
NA
Suggestions
Can watch again
NA
Good for kids
NA
Good for dates
NA
Wait to rent it
NA
The only thing worse than being all alone in this world is having dead people hang around you. For Naina (Urmila Matondkar), this problem is actually literal - she sees people hanging from nooses all around her. And for no rhyme or reason - sometimes they just want to know the time. It's hard to find solace in being woken up in the middle of the night by someone hanging on a noose who just wants to know the time. And on top of this, her psychologist is telling her to look at the brighter side of things.

Yes, so Naina is in a spot of trouble.

Her psychologist Sameer (Anuj Sawhney) tells her that she's just hallucinating, since ghosts are banned in England. However, when she starts accurately predicting deaths, he eagerly starts believing her, even offering some suggestions. Anyway, they randomly discover one day that the problem is that she is seeing through the eyes of someone who died, but not completely. We at fullhyd.com don't understand these things too well, but apparently if you die, you become a ghost. Or vice versa.

Anyway, they track down the donor of her eyes to be a girl in Bhuj, India. They go down there to find out more, but nobody wants to talk. And then Naina has to take up the battle to regain her sanity all on her own.

Well, the script is a piece of crap, as is the premise itself. According to this logic, you should never accept eyes donated by a ghost. Or whatever. We are in no mood to evaporate (or should that be elaborate?). The saving grace for the film is, as you can expect, Urmila's acting, though, after Bhoot, it's hard to expect anything new or better. The performances are all fine, and there are a few scary scenes. The editing and visuals are, in standard Bollywood style now, quite slick. The film doesn't have any songs, and ends in less than 120 minutes.

On the whole, a film worth a watch if you are in the mood for some creepies, but we doubt this'll last beyond a week or two.
Share. Save. Connect.
Tweet
NAINA SNAPSHOT

there is no proper base to the movie.dont watch it please!!!

ADVERTISEMENT
This page was tagged for
Naina hindi movie
Naina reviews
release date
Anuj Sawhney, Urmila Matondkar
theatres list
Follow @fullhyderabad
Follow fullhyd.com on
About Hyderabad
The Hyderabad Community
Improve fullhyd.com
More
Our Other Local Guides
Our other sites
© Copyright 1999-2009 LRR Technologies (Hyderabad), Pvt Ltd. All rights reserved. fullhyd, fullhyderabad, Welcome To The Neighbourhood are trademarks of LRR Technologies (Hyderabad) Pvt Ltd. The textual, graphic, audio and audiovisual material in this site is protected by copyright law. You may not copy, distribute, or use this material except as necessary for your personal, non-commercial use. Any trademarks are the properties of their respective owners. More on Hyderabad, India. Jobs in Hyderabad.