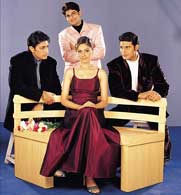 Ajay Bhashyam / fullhyd.com
EDITOR RATING
6.0
Performances
Script
Music/Soundtrack
Visuals
NA
NA
NA
NA
Suggestions
Can watch again
NA
Good for kids
NA
Good for dates
NA
Wait to rent it
NA
The tale is unlikely to astound you with its originality. Yet, when you get a film that fits the description of the quintessential Hindi movie - 3 hours, happy first half, good looking on-screen couple, family drama and nice songs - so what if it gets a little predictable sometimes? Tum Bin is a fine effort, and the fresh faces contribute to its acceptability despite no pathbreaking creativity.

Shekhar Malhotra (Priyanshu) meets Amar Shah (Raakesh Bapat) at a party and Amar invites him to come to Canada. As fate would have it, Shekhar happens to kill Amar in an accident that night. Though he gets away then, ACP De Mello refuses to give up.

Overcome by guilt, Shekhar goes to Canada to Amar's family with the intention of confessing to them. He does confess to Amar's father, played by Vikram Gokhale, but is told that due to shock, he has stopped speaking. Shekhar learns that Amar's company is on the brink of ruin and Amar's fiancée Piya (Sandali) is managing things now. He goes and offers to help and after Piya's initial apprehensions, he starts making important business deals and gets the company back on track. He also mixes well with Amar's family of a grandmother and a younger sister, Mili.

As expected, a hesitant love blossoms, and though they accept its existence to their best friends, they do not tell each other. At this juncture, lonely young industrialist Abhignan (Himanshu) enters the fray. He makes an offer that will get the company out of debt, and even though Shekhar is against it, Piya decides to go for it.

Shekhar decides to leave, and some complicated and detailed drama follows with Abhi proposing and even exchanging rings. The final twist is when the persistent cop catches Shekhar in Canada. By now you are yawning and waiting for the movie to end, and it does, happily.

Priyanshu Chatterjee does an excellent job on his debut effort. He almost single-handedly carries the entire first half and most of the second. This is more than you can say for Sandali, who fails to leave a lasting impression. The other two, especially Raakesh Bapat, have precious little to do.

The photography and picturization are excellent. It's quite nice to see new faces and fresh talent, and this does reduce the boredom factor. One feels that Shekhar's role is kind of tailor-made for a Shah Rukh, but Priyanshu more than does justice to it. The taut storyline and narration sort of fall away in the second half, which accounts for this movie getting a lower rating than it could have merited.
Share. Save. Connect.
Tweet
TUM BIN SNAPSHOT

ADVERTISEMENT
This page was tagged for
TUM BIN
Tum Bin hindi movie
Tum Bin reviews
release date
Priyanshu Chatterjee, Raakesh Bapat
Follow @fullhyderabad
Follow fullhyd.com on
About Hyderabad
The Hyderabad Community
Improve fullhyd.com
More
Our Other Local Guides
Our other sites
© Copyright 1999-2009 LRR Technologies (Hyderabad), Pvt Ltd. All rights reserved. fullhyd, fullhyderabad, Welcome To The Neighbourhood are trademarks of LRR Technologies (Hyderabad) Pvt Ltd. The textual, graphic, audio and audiovisual material in this site is protected by copyright law. You may not copy, distribute, or use this material except as necessary for your personal, non-commercial use. Any trademarks are the properties of their respective owners. More on Hyderabad, India. Jobs in Hyderabad.