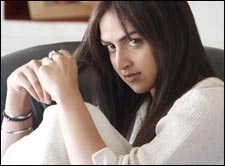 It's okay to keep closing a door here and putting out a light there for kicks, but making a public appearance should rank up there in how carefully thought through it is. Mystique is self-fuelling - ask God. You come out too often, and people have to then generate fear from within, constantly reminding themselves of who you are.

Ram Gopal Varma is a master of the horror and thriller genres, and if you're told his latest is a film with a ghost and a revenge theme in it, it's hard not to go expecting some leg-grabbing thrills. However, Darling is not much of a horror thriller. Perhaps it wasn't intended to be, but that kinda spoils it since the promos seem to tout it as one, and your expectations are set. And also, the film seems to try to be one.

Aditya (Fardeen Khan) is a happily married advertising topshot executive, with a roaring affair with wildcat junior Geeta (Esha Deol). Now it's easier to avoid a mistake when you still have the option than to pull out of it after you're neck-deep into it, and Aditya can't let go of Geeta despite his loyalty to and love for his wife Ashwini (Isha Koppikar).

But when Geeta turns pregnant and asks him to come through on his promise to divorce his wife and marry her, he tells her that he cannot do it. A bitter fracas ensues, and Geeta gets accidentally killed. A stunned Aditya quietly buries her, but can't get the guilt out of his head. The cops soon come in, too, but there is a bigger and completely unexpected problem. Geeta is back. And she wants revenge.

The film would perhaps have been more entertaining if it stuck to the horror genre, but it becomes more of story-telling after the initial thrills in introducing the ghost. Geeta (rather, her ghost) gets too much of screentime, and becomes just a character in the film rather than something supernatural that you dread. And then you start thinking logic instead of feeling scared or waiting for what happens next.

For example, why can't Aditya just talk to Geeta and apologize when she's visible all the time and talking to him? If Geeta is taking the moral highground on feeling cheated, how right was she in getting into a relationship with a married man in the first place? Why does Geeta, who talks of right and wrong, grievously injure Aditya's friend for no fault of his, and then his wife? And heck, what is she doing to pass the time in all the time that she is not visible to Aditya? Indeed, how do ghosts keep themselves occupied?

For a script that deals with the rage of a woman cheated and hence dwells, even if underneath the surface, on morals, there are too many loopholes. Perhaps it's never Varma's case that Geeta is upright either and perhaps he's merely narrating a story, but in the Indian mileau, people still need a clear right and wrong in the movies - if you leave them with too many conflicts, most will not come out and say that it was a good movie.

Fardeen Khan turns in an excellent performance of a man scared and subdued by guilt - actually, all performances are commendable. The film has the slickness and technical sheen of any Varma film, and is worth a watch almost just for that, like with most RGV movies. The few songs have the RGV stamp of raunchiness all over them.

Darling has no boring moments, and in any case is worth a watch for its look-and-feel and its thrills. Just don't expect the usual pace and grip of a Ram Gopal Varma film.
Share. Save. Connect.
Tweet
DARLING SNAPSHOT

ADVERTISEMENT
This page was tagged for
Darling hindi movie
Darling reviews
release date
Fardeen Khan, Esha Deol
theatres list
Follow @fullhyderabad
Follow fullhyd.com on
About Hyderabad
The Hyderabad Community
Improve fullhyd.com
More
Our Other Local Guides
Our other sites
© Copyright 1999-2009 LRR Technologies (Hyderabad), Pvt Ltd. All rights reserved. fullhyd, fullhyderabad, Welcome To The Neighbourhood are trademarks of LRR Technologies (Hyderabad) Pvt Ltd. The textual, graphic, audio and audiovisual material in this site is protected by copyright law. You may not copy, distribute, or use this material except as necessary for your personal, non-commercial use. Any trademarks are the properties of their respective owners. More on Hyderabad, India. Jobs in Hyderabad.