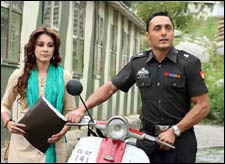 Samrat Sharma / fullhyd.com
EDITOR RATING
5.0
Performances
Script
Music/Soundtrack
Visuals
NA
NA
NA
NA
Suggestions
Can watch again
NA
Good for kids
NA
Good for dates
NA
Wait for OTT
NA
I would hate to be Samar Khan's cable-wallah. The only reason that would prompt the former to write and direct a film copied (no, not inspired, which would imply this is not a frame-by-frame rip off, which it totally is) from a film that plays on television on a regular basis is if he doesn't pay the cable guy and gets the service disconnected every month. Most filmmakers that go the DVD route of inspiration these days choose obscure French or Korean films, considering the high likelihood that if it's a Hollywood product, most of the Indian audience has already seen it.

Not so Samar Khan. He makes a brash, completely unapologetic lift of Rob Reiner's A Few Good Men. Not only is the original immensely watchable, one of the best things about it is Aaron Sorkin's brilliant and very quotable screenplay. Samar and his motley crew of screenwriters have managed to even take those dialogs and translate them to Hindi for our viewing pleasure.

The good thing about shameless copying is that a solid original script ensures the derivative is watchable, too. So we have Major Akash Kapoor (Jaffrey) and Major Siddhanth Chaudhary (Bose), who are transferred to Srinagar to hold opposite ends of an important court martial. Something that we are told is a pre-determined outcome anyway.

The case is of one Captain Javed Khan (Dobriyal), who shoots a Major of his unit. He remains silent about his motivations, and thus we are told about the secrets he must be holding. Brigadier Rudra Pratap Singh (Menon) is the brigade commander, and for reasons revealed later, he wants this case to get resolved ASAP, and Khan hanged.

Channeling Bollywood, the Demi Moore character is removed from the equation, and instead we have intrepid reporter Kaavya Shastri (Lamba), who serves as foil for our aimless hero, as well as, in a lazy bit of script-writing, one very big idea to crack the case open.

Viewed in isolation, Shaurya is actually quite impressive in that it manages to get a lot of things right. The Army demeanor and military protocols seem authentic, and the grounded sense of reality never waivers. As long as the script sticks to copying lines from the original, the lines crackle with expected pop and sizzle.

Even the acting, I have to admit, is very competently handled by Khan. Deepak Dobriyal's stoic and silent treatment is the standout performance of this film, however much they try to undercook the character. Jaffrey and Bose are pretty efficient in their roles, underplaying their characters to just the right degree. Menon has some of the best lines in the film, and brings his own brand of simmering rage and absolute dangerous streak to the table.

Even Lamba surprises with some spunky bit of acting in the bits where her character is being established. Samar Khan's one true achievement in this film is to get this great bunch of talent together and letting them do their jobs. Despite this, the fact that the film is an inferior copy grates.

Oh, no doubt about that. It is inferior, because in its effort to justify the original's plot, it changes its tack by the end of the film and brings in some tired old clichés and an angle that does not belong in the film at all. The kind of questions it tries to raise are irrelevant to the kind of film it is trying to be, and especially limp, being the only piece of original story the writers write.

I would have advocated this as a commendable effort despite any shortcomings, but it remains a shamelessly plagiarized inferior product that I cannot heartily ask you to put money down on. If you haven't seen the original, do go see this very decent attempt, and then see the original, because it deserves to be seen. In the end, if Shaurya draws more people to watch A Few Good Men, there might be some good in that.
Share. Save. Connect.
Tweet
SHAURYA SNAPSHOT

ADVERTISEMENT
This page was tagged for
Shaurya hindi movie
Shaurya reviews
release date
Rahul Bose, Kay Kay Menon
theatres list
Follow @fullhyderabad
Follow fullhyd.com on
About Hyderabad
The Hyderabad Community
Improve fullhyd.com
More
Our Other Local Guides
Our other sites
© Copyright 1999-2009 LRR Technologies (Hyderabad), Pvt Ltd. All rights reserved. fullhyd, fullhyderabad, Welcome To The Neighbourhood are trademarks of LRR Technologies (Hyderabad) Pvt Ltd. The textual, graphic, audio and audiovisual material in this site is protected by copyright law. You may not copy, distribute, or use this material except as necessary for your personal, non-commercial use. Any trademarks are the properties of their respective owners. More on Hyderabad, India. Jobs in Hyderabad.