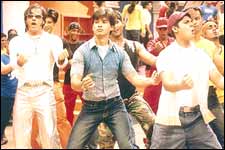 Without a doubt, the summer's most eagerly-anticipated flick by the dewy-eyed teens is Ishq Vishq. After, that is, Armaan, Andaaz, Boom, Bhoot, Main Prem Ki Deewani Hoon, Khatra, Jajantaram Mamantaram... So here's presenting to you, a wonder that took the crew 14 months to shoot, but which now only takes 3 hours to show!

Rajiv (Shahid) is a morally virtuous teen - respecting his folks, being loyal to his buddies, going to college everyday and flipping through Penthouse without his underpants off. Payal (Amrita Rao) is his glamourless playmate, loving and stalking him ever since his childhood. Instead of handing her over to the cops, Rajiv decides to hand her over to a more sinister force - his lip-syncing to Kumar Sanu! 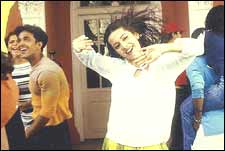 Being girl-less (with those rosy lips & flowery clothes, what did you expect, cream boy?) all his life, he jumps at an opportunity and signs the movie! Getting back to the story, Rajiv now professes his 'love' to Payal. This he does purely with the intention of having his first taste of God's best creation. And trying to get it from someone from the opposite sex also adds to his virtuous tag! Payal, a conscientious Kadwa Chouth girl, will have none of this wantonness by Rajiv. And so they break off, with him looking for some other girl to dance with.

Amrita Rao looks tailor-made for her role. It's physically not possible for her to play a gorgeous 'babe'. To describe Shahid, I'd like to use what did in an earlier review, since it was clever and mostly since I don't have to think of anything else - he looks like a before and after ad of a Dancing Academy. Mostly, after.

If there's one thing you don't need in a college set-up, it is a bunch of annoying pinheads as the cliques of the lead pair. This film doesn't, but I don't know if that's good or not 'cos throughout I was wishing they were the lead actors. A special mention to characters named Mambo & Rocky that make this side of the interval, cheesy. Music-wise, the first song of the flick is really cool with slick choreography, vibrant sets and heavenly bodies.

The second half can be described best by the title of a Deftones' song, 7 words:

Clearly evident from above is the fact that Deftones don't have much of a vocabulary. And also that the new generation needs more than glycerine to show some emotion. 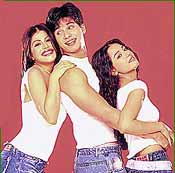 Ken Gosh, with the limited paraphernalia, has done a good job. The movie just breezes through and that makes it better than many, many others and earns itself a decent rating. Shahid has a long, bumpy road to go before he can be anywhere near his dad's acting prowess (that's Pankaj Kapoor), but he might get there. Amrita Rao is not all too convincing as a teen and Shenaz definitely looks better on TV - 'cos then, you can turn the damn thing off!

All in all, every once in a while comes along a film. This is such a film.
Share. Save. Connect.
Tweet
ISHQ VISHQ SNAPSHOT
See Ishq Vishq full details
ISHQ VISHQ USER REVIEWS
1 - 15 OF 24 COMMENTS  |  NEXT  |  LAST
POSITIVE  |  NEGATIVE |  NEWEST  |  OLDEST  |  MOST HELPFUL  |  LEAST HELPFUL
USER RATING
8.5
173 USERS
Performances
Script
Music/Soundtrack
Visuals
NA
NA
NA
NA
Can watch again - NA
Good for kids - NA
Good for dates - NA
Wait for OTT - NA
Amod Tiwari on 3rd Jun 2007, 2:12pm | Permalink
It my most favourite movie AMRITA's image is outstanding. It's the most dashing movie ever
RATING
10
Svg Ita on 7th Jun 2006, 10:04am | Permalink
The movie was fantastic . I love the acting of Shahid and Amrita.
RATING
6
Maryam Mirza on 15th Jul 2005, 12:40am | Permalink
i like the movie of ishq vishk

mithun verma is very eloquent, but i want to point out an error.

i think u meant 'iota' instead of 'aorta', in point 2 of the sucks series. merriam webster defines aorta as: the great arterial trunk that carries blood from the heart to be distributed by branch arteries through the body --

and iota as: an infinitesimal amount

ADVERTISEMENT
This page was tagged for
Ishq vishq full movie filmymeet
ishq visq full m0vie
9xmovies ishq vishq
ishq vishq movie review
9xmovie ishq vishq
Follow @fullhyderabad
Follow fullhyd.com on
About Hyderabad
The Hyderabad Community
Improve fullhyd.com
More
Our Other Local Guides
Our other sites
© Copyright 1999-2009 LRR Technologies (Hyderabad), Pvt Ltd. All rights reserved. fullhyd, fullhyderabad, Welcome To The Neighbourhood are trademarks of LRR Technologies (Hyderabad) Pvt Ltd. The textual, graphic, audio and audiovisual material in this site is protected by copyright law. You may not copy, distribute, or use this material except as necessary for your personal, non-commercial use. Any trademarks are the properties of their respective owners. More on Hyderabad, India. Jobs in Hyderabad.