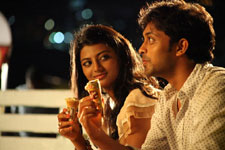 Ravi Kandala / fullhyd.com
EDITOR RATING
1.0
Performances
Script
Music/Soundtrack
Visuals
2.0
1.0
1.0
1.0
Suggestions
Can watch again
No
Good for kids
No
Good for dates
No
Wait to rent it
No
Director Maruthi has started a genre of cinema - one that consists of frustrated boys who can think of nothing but sex, and seductresses who will not hesitate to sleep with a myriad of boys to get their needs fulfilled. One or two of these movies unfortunately did well, and we now have an entire bunch of moviemakers being promoted by Maruthi who are out to make such movies.

Green Signal falls into the same category - this one is a freemake of Pyaar Ka Punchnama with one additional track from Dil To Baccha Hai Ji. As usual, a bunch of newcomers act in the movie, all of them with dreams in their eyes and with hidden acting abilities that they (and we) are yet to discover.

The film is about four youngsters, Sandy (Manas), Naidu (Revanth), Google (Gopal Sai) and Prem (Ashutosh), living in the same apartment. They lead a carefree life, one which is defined in this brand of cinema as comprising of drinking beer, dancing around with random women and fantasizing no end about imaginary girlfriends.

Each one of them finds himself a partner (we use the word "partner" since Prem is gay). The Maruthi brand of comedy begins with one of the girls being shown as a big nag, and the other having questionable morals since despite having a boyfriend she will still flirt around with someone else for her financial needs.

How the guys fall in and out of love and face tragedy (which is showcased in one song that involves a lot of frustrated running and beer drinking), but do not fall out of their frivolous ways is the plot of this (un)romantic (un)funny comedy.

The film has some distasteful gay humour and some terrible sexist humour. The way youngsters are spoken about and portrayed in the movie warrants censorship to the extreme, but for some reason, our censor board appears more busy protecting the interests of different castes and regions. The director fails to infuse the required energy into the proceedings, and the famous 3-minute monologue from Pyaar Ka Punchnama is recreated terribly.

The leads, as we mentioned, are yet to discover their acting abilities. Revanth and Manas are still allright, but Gopal Sai and Ashutosh need to learn some acting for a while, and then try a comeback. For typical hero-type introductions, however, it would definitely be difficult to slot any of the four of them as leads.

As for the female leads, Rakshita is the only one that makes any impression. Dimple has a cameo and is passable, while the others only show skin and attempt to act.

The cinematographer does not obviously understand lighting, and the way Rakshita's face alternates between ultra-dark and ghostly white must surely undermine his future chances. The music has a lot of noise, and the songs are all just excuses to show more skin than can be shown in regular scenes.

The Maruthi brand of movies immediately needs to be shown the red light. They all appear like a frustrated bunch of middle-aged men came together and are making such terrible movies to take revenge on women.
Share. Save. Connect.
Tweet
GREEN SIGNAL SNAPSHOT 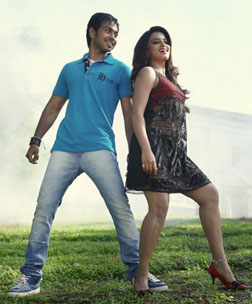 ADVERTISEMENT
This page was tagged for
Green Signal telugu movie
Green Signal reviews
release date
Revanth, Manali
theatres list
Follow @fullhyderabad
Follow fullhyd.com on
About Hyderabad
The Hyderabad Community
Improve fullhyd.com
More
Our Other Local Guides
Our other sites
© Copyright 1999-2009 LRR Technologies (Hyderabad), Pvt Ltd. All rights reserved. fullhyd, fullhyderabad, Welcome To The Neighbourhood are trademarks of LRR Technologies (Hyderabad) Pvt Ltd. The textual, graphic, audio and audiovisual material in this site is protected by copyright law. You may not copy, distribute, or use this material except as necessary for your personal, non-commercial use. Any trademarks are the properties of their respective owners. More on Hyderabad, India. Jobs in Hyderabad.