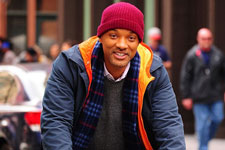 Swaroop Thotada / fullhyd.com
EDITOR RATING
4.0
Performances
Script
Music/Soundtrack
Visuals
7.0
2.0
5.0
6.0
Suggestions
Can watch again
No
Good for kids
No
Good for dates
No
Wait for OTT
Yes
The characters in Collateral Beauty parade around with the film's lame existential conceptions as if they are rare shreds of profound wisdom. If that's not bad enough, they do not do anything else other than that. It all starts with Howard's (Will Smith) pop-philosophical lecture to his employees about how advertising is about making people's lives better. Oh, seriously? And Smith delivers it with such a straight face that we eventually feel sorry and forgive rather than ridicule him, as he genuinely appears to believe it.

But he doesn't stop there. He goes on about how the three abstractions called time, love and death are subsumed under the enigmatic conception of human existence, and how all our life revolves around these three.

But this wise yet charismatic guru who manages to demystify life in one simple sentence is crippled beyond repair when he loses his 6-year-old daughter and turns a giant mess of himself, almost jeopardizing all his stakeholders, friends and employees' lives. It seems like the flip side of romanticizing life is that the greeting-card prose doesn't rescue anyone from the harshness of real life complexities. But these observations are ours and not those of the film, as the film really buys into its ham-handed thesis.

So Howard is an advertising executive of a successful ad firm, whose board of directors includes his friends Whit (Edward Norton), Claire (Kate Winslet) and Simon (Michael Pena). Initially shown as a magnetic personality, the charismatic boss that sways his awestruck employees with polished-for-corporate bits of transcendental wisdom, he turns maniacally depressed and morose when he loses his daughter to a rare form of cancer.

His partners and employees worry as he is the glue that holds the company together and also the face of the enterprise, which makes his condition put everyone's lives at risk. Meanwhile he spends all of his time in constructing elaborate arrays of colorful dominoes, only to knock them down in an attempt to understand why life would pour itself into things of elaborate and delicate beauty, and would abruptly take it all away as per its whims and fancies. Beware that this is not the only trace of in-the-face symbolism in this film.

Fed up and desperate, Whit comes up with a plan to make Howard sell out his shares, by convincing the board that he is not fit to hold the reins. Whit, Claire and Simon come across Howard's letters which he posts to the three abstractions, and they hire actors (Keira Knightley, Jacob Lattimore and Helen Mirren) to pose as the personifications of time, love and death. They also hire a private eye to record his encounters with these three actors and later to digitally manipulate the videos to make him look crazy. Meanwhile we see him making friends with Madeleine (Naomie Harris), an organizer of a support group for grieving parents.

And then the plot meanders into several twists and twirls none of which is clever or redeeming. The film's main transgression is its attempt to use made-for-dummies metaphors to contemplate enigmas like time, love and death. The three main supporting characters are merely there to enable the film to demonstrate the three abstractions. Claire wants to be a mother but ran out of "time", Simon is "dying", and Whit has a troubled relationship with his daughter who doesn't "love" him, and all of them just wait till they are lectured on their respective subjects.

Two weeks ago we saw Arrival envisaging time and grief in all of their complexity and transcendence. Here we get pep talks that reduce these questions to mundane terms and pop-philosophy terminology. If not for these talented actors that struggle to save the film, the cringe factor would have shot way out of the graph.

Will Smith is confined to monosyllabic rants and staring into the vacuum most of the time. Norton, Winslet and Pena deliver more than what this film deserves. While Knightley and Lattimore wander here and there, confused in trying to find a place between camp and grimness, Mirren outshines by incorporating an adorable yearning for approval and applause that somehow unshackles her from the tedium that surrounds these characters.

Whether Smith has a thing for emotionally manipulative stories, or this is his version of playing to the awards gallery, he should realize this is not working. It looks like he didn't learn the right lessons from his Seven Pounds. Hope he does from this one.
Share. Save. Connect.
Tweet
COLLATERAL BEAUTY SNAPSHOT 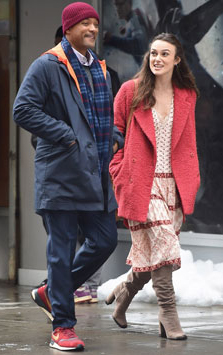 ADVERTISEMENT
This page was tagged for
collateral beauty english rewiew
Collateral Beauty english movie
Collateral Beauty reviews
release date
Will Smith, Edward Norton
Follow @fullhyderabad
Follow fullhyd.com on
About Hyderabad
The Hyderabad Community
Improve fullhyd.com
More
Our Other Local Guides
Our other sites
© Copyright 1999-2009 LRR Technologies (Hyderabad), Pvt Ltd. All rights reserved. fullhyd, fullhyderabad, Welcome To The Neighbourhood are trademarks of LRR Technologies (Hyderabad) Pvt Ltd. The textual, graphic, audio and audiovisual material in this site is protected by copyright law. You may not copy, distribute, or use this material except as necessary for your personal, non-commercial use. Any trademarks are the properties of their respective owners. More on Hyderabad, India. Jobs in Hyderabad.