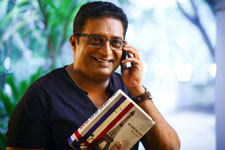 Kritika Deval / fullhyd.com
EDITOR RATING
5.5
Performances
Script
Music/Soundtrack
Visuals
7.0
4.5
6.5
7.5
Suggestions
Can watch again
No
Good for kids
No
Good for dates
Yes
Wait for OTT
Yes
The most fulfilling aspect of a light-hearted romance is watching two people who don't fit anywhere else come together, and just... fit. This is a joy that regional cinema, with its supposedly perfect manifestations of humanity, often denies us. And this is the reason why you must watch Ulavacharu Biryani, a story about two socially dysfunctional people who meet over an accident and are drawn to each other without once venturing into the specifics of the trappings that make for contemporary personhood.

The reason, you see, is that they bond over food. There are many couples who seem to have exactly one point of interest in common, and more often than not, that point is food.

Our obsession with food is such an essential microcosm of everything that makes us different from the other sentient beings that occupy the planet alongside us that it is hard to overstate its influence. In fact, many would argue that food is the reason for us to have evolved into what we are today.

Then, of course, there is the romance of it. The act of smelling and tasting great food is such an intensely personal experience that the act of sharing this experience often brings people together in ways where not many other areas of their lives matter. This was shown in an excruciatingly beautiful manner by Tanikella Bharani in Midhunam. To a lesser extent, Ulavachari Biryani works on the same principle.

Kalidasa (Prakash Raj) and Gauri (Sneha) are both people who have managed to avoid matrimony, not because they have some horrible "secret twist" that prevents them from finding someone, but, as so often happens in real life, because they are just not very good with people. They are both opinionated persons with very little patience for human follies. They both come from not very conventional backgrounds, and are seemingly content to live their lives out without buying into the myth of the soulmate.

We know all of this because the film gives us these insights into their life with loving clarity. We see who these people are without dilution from the burden of a "past" or through the muddied lens of an unreasonable urge to multiply and be fruitful. You get the sense that, while they wouldn't mind having someone who they can share their life with, they would also be quite happy to enjoy their great careers, the company of their family and friends, and their various interests, for as long as they are around.

The movie is short, with the focus on character discovery being much larger than on actual movement. The basic plot is that Gauri dialing a wrong number to a restaurant leads her to call Kalidasa and place an order. Then comes an exchange that doesn't really make a lot of sense, IOHO, but egged on by Kalidasa's nephew Naveen (Tejus) and Gauri's sister Meghana (Samyukta Belawadi), the two apologise, and awkwardly begin a tentative friendship via phone.

Then, after days of talking to one another about everything on earth except what most people would consider important, like their respective ages, family details and birth dates, Gauri invites Kalidasa to meet her at a coffee shop. Initially jubilant, they both then suffer pangs of intense insecurity that seem slightly out of character but are essentially believable, leading to an interval twist that leads the film to do everything that it has so far gotten right, wrong.

While the first half is refreshing in so many ways, the second half delves into exactly the sort of sentimental morass that those wanting to watch this film will wish to avoid.

Despite the steep downward plunge in plot development that the second half takes, there are many things about Ulavacharu Biryani that make us optimistic about our cinema. Firstly, there are more than a few unconventional characters - a typical transgender, a middle-aged woman who enjoys an occasional drink, a sadhu who is essentially comic relief but not in ways you would expect. We have seen all of these characters in other movies. What makes this film remarkable is that it allows the personality traits of these characters to color their own behaviours, but not that of those around them. All of their "quirks" are taken for granted, and are never once used to generate forced humour, or of any other kind. There is actually very little about this film that will make you guffaw out loud. You will find yourself smiling to yourself far more often, and will be no less satisfied for it.

One scene in the first half, involving a mythical cake from a Greek epic, shows the film's attempt at marrying off food and romance so perfectly that just that one scene goes a long way towards making up for what the movie devolves into.

Both Prakash Raj and Sneha pull off their roles magnificently, with Prakash Raj wearing his stray grays with more panache than Richard Gere. Sneha puts a lot of nuance into her character, and most flaws in either of their performances seem more like those of the screenplay.

The music by Ilayaraja sets a wonderful tone for the theme, but seems a tad hackneyed. The bigger prize goes to the cinematography. Every frame is a careful composition, and a few highly charged scenes are composed with great and loving detail.

Bottomline: This film about the unexpectedness of love and laughter had great potential to be something inspiring. If only it was consistent enough to make you wish to watch it again.
Share. Save. Connect.
Tweet
ULAVACHARU BIRYANI SNAPSHOT 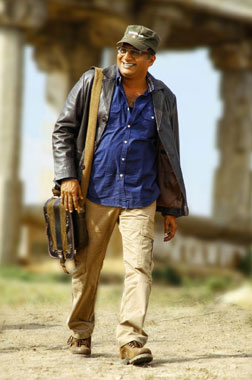 ADVERTISEMENT
This page was tagged for
Ulavacharu Biryani telugu movie
Ulavacharu Biryani reviews
release date
Prakash Raj, Sneha
theatres list
Follow @fullhyderabad
Follow fullhyd.com on
About Hyderabad
The Hyderabad Community
Improve fullhyd.com
More
Our Other Local Guides
Our other sites
© Copyright 1999-2009 LRR Technologies (Hyderabad), Pvt Ltd. All rights reserved. fullhyd, fullhyderabad, Welcome To The Neighbourhood are trademarks of LRR Technologies (Hyderabad) Pvt Ltd. The textual, graphic, audio and audiovisual material in this site is protected by copyright law. You may not copy, distribute, or use this material except as necessary for your personal, non-commercial use. Any trademarks are the properties of their respective owners. More on Hyderabad, India. Jobs in Hyderabad.