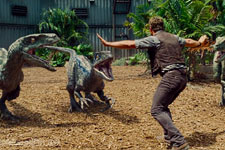 Nupur Barua / fullhyd.com
EDITOR RATING
7.0
Performances
Script
Music/Soundtrack
Visuals
7.0
7.0
6.0
9.0
Suggestions
Can watch again
Yes
Good for kids
Yes
Good for dates
Yes
Wait for OTT
No
You have to admit that those guys at Isla Nublar, an island off the coast of Costa Rica, are persistent. Past events (mostly tragic) have not deterred them in their pursuit of perfection, and it helps that there is so much profit in it. With Jurassic Park now defunct after the events that took place there many years ago (remember Jurassic Park 3 and the evil Spinosaurus?), Simon Masrani (Irffan Khan) wants to continue John Hammond's pioneering work with his theme park, Jurassic World. Needless to say, the park has plenty of dinosaurs from the Jurassic era, a continuation of the legacy that began with fossil DNA and hybridisation attempts (Jurassic Park).

Claire Dearing (Bryce Dallas Howard) is the operations manager of the park, and living in Jurassic World has made her lose touch with her family. Which is why her sister, Karen (Judy Greer), sends her sons Gray (Ty Simpkins) and Zach (Nick Robinson) to the island, to spend some quality time with their aunt, what with Christmas around the corner.

Gray, a dinosaur enthusiast, is ecstatic, as any young boy would be, at the potential for adventure, while Zach, a teenager, vacillates between nonchalance and reluctant excitement. Unfortunately, they hardly meet Claire, and are dumped on her assistant Zara (Katie McGrath).

Claire has her reasons. The new hybrid creature, whom they now call the Indominus Rex, is a genetic marvel, even though she does not know exactly what the DNA make-up is. Simon wants the Velociraptor trainer, ex-Navy man Owen Grady (Chris Pratt), to observe the new giant creature, which seems to be quite violent. Owen and Claire have a history, of sorts - they went on one date and it was miserable.

When the Indominus Rex escapes into the restricted forest area, Owen demands that the island be evacuated. Meanwhile, Zach and Gray are in a mobile gyrosphere, which is where they meet the creature. It turns out that the giant dinosaur is very, very intelligent, and likes to kill for sport. When Claire realises that her nephews are in the danger zone, she drags Owen to go and look for them.

There is no point in watching a monster movie if the monster does not create havoc. You will therefore be pleased to know that Jurassic World sticks to a classic narrative as it places victim after innocent victim, both dinosaur and human, in the Indominus Rex's path. To add to the thrills, there are the flying Pteranodons that swoop from the skies and scoop up humans, the flying Dimorphodons that attack other flying objects, such as helicopters, the gigantic Mosasaur that eats anything that hovers above the water tank in which it lives, and the endearing yet deadly and unpredictable Velociraptors, or Raptors, that become more intelligent with each passing movie. Be prepared for bloodshed in plenty, and some pretty pointless, yet true-to-Hollywood-script, deaths.

If you are expecting cheesy dialogue and mushy moments of self-realisation, you have come to the right movie. The story is, in simple words, a masala action thriller, with just the right amount of moral preaching - about what happens when man gets greedier and greedier for unreal/unnatural thrills. It can appear a commentary on the current global scenario in the corporate world. Relationship issues, such as those between the brothers and between the soon-to-be-divorced parents, are never really explored, or explained. And there are enough unanswered questions - from where the embryos go from the island and what the agenda of the scientists / Vic Hoskins is. But honestly, how many would care about all such niggles? You do not intend to watch Jurassic World for love, romance and logic - you want to watch it for the dinosaurs.

And there the film delivers. It has been almost 14 years since the last instalment of this franchise (yes, that is what it is), and the special effects are bigger, better and louder - with Steven Spielberg as producer, you'd be disappointed if it were otherwise. If you watch the movie in 3D (we recommend that you do), you can rest assured that your glasses will steam over with all the action that you can almost touch. There is hardly any element of surprise, and you always know, at least a minute earlier, who the sinister (scarily realistic) creatures are going to kill/eat/dismember/toss next, but you cannot help gasping when your prediction comes true. Every time.

The throwback to Jurassic Park, albeit in ruins, is a pleasant surprise. Unlike the previous movies, Jurassic World has many visuals of lush greenery, even when the going gets really tough. The park itself, with guests numbering thousands, seems like a fun place, with holograms and special exhibits. Despite the horrors that follow, you would still want to visit this fantastical land. The production design and costume design departments do not pay much attention to detail in elements such as DNA labs and clothes, or even weapons (everything looks pretty generic), but they are perhaps depending on the distraction and curiosity that the graphics will evoke.

This particular movie does not have too many tongue-twisting names for the animals, especially if you are already familiar with the past three movies, and you will definitely remember the Raptors. They, more than the cast, leave an impression on you. Chris Pratt and Bryce Dallas Howard do, too, but their characters are of miniscule consequence when compared to the dinos. After all, they are mere humans.

Ty Simpkins is adorable as Gray with his enthusiasm and insecurities. Irrfan Khan has a substantial role - a fact that needs to be pointed out since he is an Indian actor. He is pretty likeable, too, although his diction needs some polishing. BD Wong plays Dr Henry Wu, who is the only character from any of the previous movies, and it is eerie how little he has aged (talk about youthful genes!).

Jurassic World is not for the faint-hearted, of course, but who can resist a trip down memory lane? Laced with wry humour in parts and paced evenly, the film doesn't have a single tedious scene, and is a fitting sequel to the first movie (and the climax assures that there will be more). Just read up on your dinosaurs before you watch it.
Share. Save. Connect.
Tweet
JURASSIC WORLD (3D) SNAPSHOT 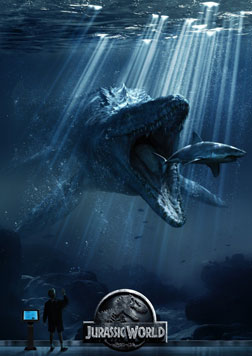 ADVERTISEMENT
This page was tagged for
jurassic world 3d full movie
Jurassic World (3D) english movie
Jurassic World (3D) reviews
release date
Chris Pratt, Bryce Dallas Howard
Follow @fullhyderabad
Follow fullhyd.com on
About Hyderabad
The Hyderabad Community
Improve fullhyd.com
More
Our Other Local Guides
Our other sites
© Copyright 1999-2009 LRR Technologies (Hyderabad), Pvt Ltd. All rights reserved. fullhyd, fullhyderabad, Welcome To The Neighbourhood are trademarks of LRR Technologies (Hyderabad) Pvt Ltd. The textual, graphic, audio and audiovisual material in this site is protected by copyright law. You may not copy, distribute, or use this material except as necessary for your personal, non-commercial use. Any trademarks are the properties of their respective owners. More on Hyderabad, India. Jobs in Hyderabad.