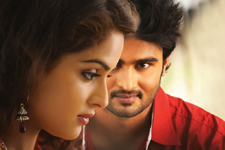 Kritika Deval / fullhyd.com
EDITOR RATING
3.5
Performances
Script
Music/Soundtrack
Visuals
5.0
3.5
5.0
4.5
Suggestions
Can watch again
No
Good for kids
No
Good for dates
No
Wait for OTT
No
Well, what can we say? It lasted too long as it is. That Sudheer Babu's foray into cinema began with the subtle, the refreshing, and the unusual, is immaterial. What is important is that he has arrived, no matter that his arrival seems to have been besieged by mediocrity.

Aadu Magadra Bujji, as the title states, is all about the manly ways of the manly Siddhu (Sudheer Babu). At no moment does the film deviate from its display of Siddhu-istic manliness - not to touch on humour, not to grip the audiences, not to spool even a thread of the magic of love.

It all begins, of course, with a single thought in Siddhu the Man's Man's (sic) head upon taking one long look at Indu (Asmitha Sood) - "I Tarzan, She Jane". Causing the Man to join Indu's college just to be near her.

After this perfectly plausible happenstance, the film slowly degenerates into one display of chest hair and fists after another, and soon, the only disturbance to this sequence is the occasional bosom or pathetic scream emitted by it.

Don't get us wrong. We enjoy us some masala as much as anybody. We do, however, prefer that the dish itself be well-done. Aadu Magadra Bujji is replete with all the elements required to make an entertainer - rivalries, fights, gundas, damsels in distress - all mixed up without a thought to making the mixture even the slightest bit entertaining.

The only bit even that might titillate is one that involves an anthropomorphic dog whose thoughts are more interesting than anything that comes out of the mouths of any of the leading characters.

The truly sad part is, though, that the leads do not lack talent. Sudheer Babu shows the potential of the kind of charm that might capture popular imagination, if not trampled over so heedlessly. Asmitha Sood has a pretty and expressive face that could perhaps be used to display more than dismay and coyness. Ranadhir as Indu's belligerent brother seems just the right amount of boneheaded for the character. Ranadhir's love interest Poonam Kaur is pretty enough, if not the brightest star in the galaxy.

The cinematography is haphazard, with not a single thought to aesthetics except to shine down on the assets of the two DIDs (Damsels in Distress). The music is uninspired and uninspiring, and the background score is simply redundant.

Aadu Magaadra Bujji is what happens when those with influence but little talent set up to imitate talent. It is best left for those days when there is nothing else to watch on TV. If you really want to have a good time at the movies, this and this, or even this, await you.
Share. Save. Connect.
Tweet
AADU MAGADURA BUJJI SNAPSHOT 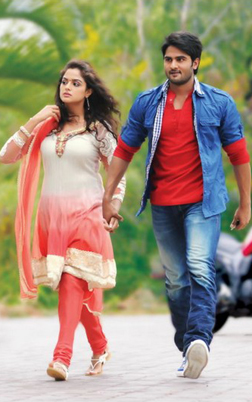 ADVERTISEMENT
This page was tagged for
Aadu Magadura Bujji telugu movie
Aadu Magadura Bujji reviews
release date
Sudheer Babu, Poonam Kaur
theatres list
Follow @fullhyderabad
Follow fullhyd.com on
About Hyderabad
The Hyderabad Community
Improve fullhyd.com
More
Our Other Local Guides
Our other sites
© Copyright 1999-2009 LRR Technologies (Hyderabad), Pvt Ltd. All rights reserved. fullhyd, fullhyderabad, Welcome To The Neighbourhood are trademarks of LRR Technologies (Hyderabad) Pvt Ltd. The textual, graphic, audio and audiovisual material in this site is protected by copyright law. You may not copy, distribute, or use this material except as necessary for your personal, non-commercial use. Any trademarks are the properties of their respective owners. More on Hyderabad, India. Jobs in Hyderabad.