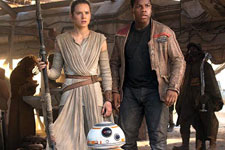 Rohit Murari / fullhyd.com
EDITOR RATING
10
Performances
Script
Music/Soundtrack
Visuals
10.0
10.0
10.0
10.0
Suggestions
Can watch again
Yes
Good for kids
Yes
Good for dates
Yes
Wait to rent it
No
To paraphrase a paraphrased phrase from our review of The Matrix Revolutions, "Everything that has a beginning, has an end - unless it is Star Wars." The 1970s, 1980s, 1990s, 2000s and 2010s - each decade has had at least one Star Wars live action movie release. All good things don't necessarily come to an end.

Episode IV released in 1977. Its theatrical release posters said, "Coming soon to a galaxy near you!" You watched it. And then you watched it a few times more. It was pioneering. It was path-breaking. It was radical. It was avant-garde. Yes, you needed to switch to French to describe the brilliance that this movie was because English did not have enough words.

Episode V blew your mind. Episode VI merely confirmed what you always knew - when it came to cinematic allegiances, you made wise choices.

George Lucas. He defined a space opera. He invented CGI. He took every existing rule of filmmaking and threw it out. Into space.

And then he took a large dump on it. Twice. Episode I and Episode II - they are how you describe things that are beyond abominations. Episode III salvaged quite a lot of it.

This reviewer had said that Episode III would be the last Star Wars movie we would ever see. Yes, Jon Snow and I - we know nothing. Episode III was also the last movie I reviewed.

This time, the force awakens. And at the helm is J J Abrams who wanted the job so badly that he made two demo reels - Star Trek (2009) and Star Trek Into Darkness. Credit where it is due, though. Simply put, Abrams did not reboot Star Trek. He gave the franchise the much-needed kick up its backside.

So, the 2-billion dollar question: How is it?

The force is awake. Wide awake. It does not need a snooze button. It does not even know what an alarm clock is. It has no concept of time. It is just there, all-pervading as it makes its way into the hidden crevices of your brain. Where it rests, and ferments.

This movie, in a nutshell, is all that was, is or ever will be right with this world.

I had never heard of Daisy Ridley. Today, I am in love. She is mind-bogglingly good, and you want her in every frame. There is not an iota of doubt - she is a superstar in the making. What about Harrison Ford? To comment on a legend, I am not worthy. He is Han Solo. 30 years older and weary. But that chutzpah, oh that chutzpah! Carrie Fisher? Perhaps not a great idea to reprise that role - her in the gold bikini is the only lasting memory I want. I am a guy. I am a pervert. Get over it.

The special effects, though, are stars unto themselves. They are there to serve a singular purpose - paint the canvas of that galaxy far, far away, and then get out of the way. This is the biggest triumph of the movie. JJ knows exactly how much SFX is needed. No less, no more. Practical effects or CGI? I don't care either way. Practical or otherwise, the effects work. And I was having too much fun to go about discerning which is which.

John Williams is in solid form. His musical score is other-worldly. The production values are top-notch. Dan Mindel's cinematography puts you in the middle of all the action. And, JJ is God. He has to be. To recreate all this from the ashes of the prequels is beyond the reach of a mortal being.

This movie is a win. Whether you choose to watch it in 2D or 3D or IMAX is a choice I leave to you. Whether you choose to watch it at all is a choice Evolution has already made, and this review is not going to influence it one bit. You don't have to be a Star Wars fan to be sucked in by the movie's magnificence. However, if you are not a Star Wars fan then you should re-look at the direction your life has taken.
Share. Save. Connect.
Tweet
STAR WARS: THE FORCE... SNAPSHOT
STAR WARS: THE FORCE AWAKENS (3D) SNAPSHOT 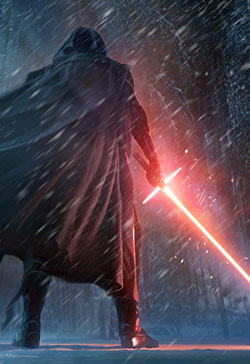 I was mildly surprised when this movie got a perfect 10 on fullhyd, but boy was it justified. I saw this movie on a large screen in 3D and it was amazing. The screenplay, the acting, the CGI, the plot twists - they're all brilliant. I've been a huge fan of star wars, including the prequels (Don't hate me, I just love them. Never understood why people hate them), and walked in with enormous expectations. The movie didn't just live up to my expectations, it somehow managed to exceed them. I had goosebumps over and over again, and just didn't want the movie to end.

Acting wise, Daisy Ridley owns the movie. She is the hero you root for right from the word go. You'd be excused for thinking she is a very experienced actress. Harrison Ford as Han Solo is back as the bad boy you love. John Boyega as Fin and Adam Driver as Kylo Ren are really good.

My only grouse was that they shouldn't have put in the 12 parsecs thing. I know it was in the originals, but it just doesn't make any sense.

I won't say anything else and run the the risk of spoiling it for you. Go watch it on IMAX. I guarantee you'll love it.

ADVERTISEMENT
This page was tagged for
Star Wars: The Force Awakens (3D) english movie
Star Wars: The Force Awakens (3D) reviews
release date
Harrison Ford, Mark Hamill
theatres list
Follow @fullhyderabad
Follow fullhyd.com on
About Hyderabad
The Hyderabad Community
Improve fullhyd.com
More
Our Other Local Guides
Our other sites
© Copyright 1999-2009 LRR Technologies (Hyderabad), Pvt Ltd. All rights reserved. fullhyd, fullhyderabad, Welcome To The Neighbourhood are trademarks of LRR Technologies (Hyderabad) Pvt Ltd. The textual, graphic, audio and audiovisual material in this site is protected by copyright law. You may not copy, distribute, or use this material except as necessary for your personal, non-commercial use. Any trademarks are the properties of their respective owners. More on Hyderabad, India. Jobs in Hyderabad.