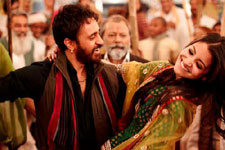 Kritika Deval / fullhyd.com
EDITOR RATING
6.5
Performances
Script
Music/Soundtrack
Visuals
7.5
5.5
6.5
8.0
Suggestions
Can watch again
No
Good for kids
No
Good for dates
Yes
Wait to rent it
No
The gap between commercial success and artistic vision is a huge one in Indian cinema, caused by a lazy movie mafia of sorts who decided it was okay for them to stick to formulas for an indefinite period in time, and an audience that, for some mysterious reason, decided to go along with it. After all, it is we, the audiences, that have been funding the mediocrity.

Thankfully for us, the nation is finally starting to grow out of it all. And so, you have room for a whole new bunch of mavericks who feel that being true to their art need not be subversive to setting the cash registers a-ringing, Vishal Bhardwaj being one of them.

With a cast chock-full of actors known for their skill, a cause as contentious as Maoism, an intriguing title and catchy music, Matru Ki Bijli Ka Mandola (MKBKM) has all the standard ingredients of a hit. But that doesn't make it any less of a rollicking ride that'll make you smile appreciatively at its wit as often as it'll make you LOL at something unbelievably slapstick.

The thing that strikes you the most, however, is the joyous audacity of it all, the sheer "what-the-hell"-ishness, the abandon. Mind you, it is not the characters in particular that we speak of here. It's this sense that you get that the makers have decided that they won't let "work" get in the way of their playtime.

And, so you have gulabi bhains, flying kachchas, and a greedy feudal lord who goes all commie when inebriated.

On the face of it, the story is one that you have heard a million times. Harry Mandola (Pankaj Kapur), lord and master of the Haryanvi village of Mandola (yes connection to the person), wants to sell all the farmland and have it turned into an SEZ, leaving thousands of farmers without the means to their livelihood.

Matru (Imran Khan) is a young villager who has completed his LLB from Delhi University, and is now back in Mandola to help its residents with their woes. Then there is Bijlee Mandola (Anushka Sharma), Harry's hell-raising Oxford-educated daughter that Harry wants to marry off to Baadal (Arya Babbar), a rather malevolent idiot and son of ruthless politician and Harry's love interest (gross, we know) Chaudhari Devi (Shabana Azmi).

Bijlee, however, has something that her father has only when he is drunk, and her fiance doesn't even know exists; i. e., a conscience. Also, she is halfway in love with Matru.

Will Harry have a change of heart? Will Bijlee and Matru ever get together? Who is this Mao Tse Tung, as Baadal ingenuously asks? And where on earth are Mandola's women???

All of this sounds like the plot of something made in the early '90s, but that's where the comparisons stop.

MKBKM is young and sassy. And Matru, oh holy crap, Matru! Sexy, smart, funny Matru! He doesn't go about beating up or shooting people. No sirree. Instead, he becomes friends of sorts with Harry, and cleverly manipulates him into drinking. Because that's when Harry becomes the kind of man who would lead the people on a morcha against himself. It's a wonder that his daughter harangues him to go teetotaling at all. The man's just no fun when sober.

All of this is not to say that MKBKM is faultless. There are times, especially towards the end, when you rather wish Bhardwaj had kept track of all the strings he was spinning, because, as things stand, the movie would look like something woven by a 5-year-old - bright and colorful and fascinating, but unkempt, with short strings poking out here and there, and little respect for focus and pattern.

Bharadwaj obviously knew what his point A and point B were. However, somewhere along they way, he got preoccupied smelling the gulabi bhains, and then had to scramble to get to point B, any which way he could.

However, issues like this take away but little from your experience of watching the film, because very rarely does it allow you room for contemplation. We doubt you'd have as much fun if you saw it a second time round, though.

Among Pankaj Kapoor and Imran Khan, there is no clear winner in the tug-of-war for screen space. The sheer elegance Kapoor imbues into his performance as he shifts effortlessly between personalities impresses you just as much Imran's understated appeal.

Shabana Azmi as the evil politician and Anushka Sharma as the headstrong wild-child, pretty much the only two women on the screen, have roles that are a tad less fleshed out, but ones that they, nevertheless, visibly enjoy.

As far as Arya Babbar is concerned, the man plays stupid and mean with such intelligence and nonchalance that it is hard to believe that he actually isn't - stupid and mean, that is. He's absolutely convincing, whether he is blithely informing his fiancee about the African tribe he "bought" for her who don't know they've been bought; or is giving the Haryanvi police instructions in a sign language they obviously have no idea about.

The screenplay and the cinematography are nearly faultless. Everything you see looks lovely, with all shots executed with precision. In fact, you can tell from the way the whole movie has been executed that it is all the vision of one person.

The only thing that lets the movie down is the slightly undercooked and overheated plot. However, if you're determined to enjoy yourself, that aspect won't hamper you in the slightest bit.
Share. Save. Connect.
Tweet
MATRU KI BIJLEE KA... SNAPSHOT
MATRU KI BIJLEE KA MANDOLA SNAPSHOT 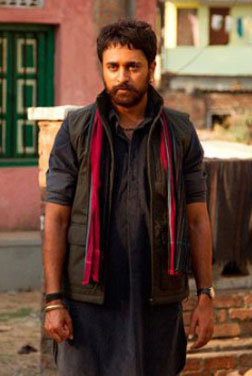