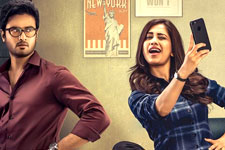 Pranita Jonnalagedda / fullhyd.com
EDITOR RATING
6.5
Performances
Script
Music/Soundtrack
Visuals
7.0
6.5
6.0
8.0
Suggestions
Can watch again
No
Good for kids
Yes
Good for dates
Yes
Wait for OTT
Yes
In general, you'd assume that a simple "good", "not good", "average" or "okay" would suffice when the question "how was the movie?" is thrown at you. Except it's not. Because there are a few films which are akin to having a meal at a hotel with great ambience, amazing service, beautiful cutlery but just passable food, and summarizing the overall experience feels tough if not impossible.

Nannu Dochukonduvate is just that - an experience you may appreciate, but don't quite relish. The romantic comedy chronicles the lives of Karthik (Sudheer Babu), a self-obsessed workaholic software engineer, and Meghana (Nabha Natesh), a streetwise short film actress. The duo get acquainted when Meghana is brought in to help Karthik out in a potential family crisis by pretending to be his girlfriend Siri in front of his father (Nassar). One thing leads to another, and not just is the dad smitten by his fake would-be daughter-in-law, but the duo predictably end up falling for each other, though they convey their feelings towards each other only the at end after the dad finds out and a lot of drama ensues.

At the outset, even though he takes his time to get into the rhythm of the narrative, director R S Naidu gives you the perfect mix of everything. You have ample comedy. So much so that the first half remains a wholesome experience primarily because of the laughs it offers every other minute. The sequence where the two destined lovers give a made-up account of how they met is a laugh riot, with a scene from Srimanthudu being recreated for you. Another noteworthy scene would be the one that has Sudheer Babu trying his hand at becoming an actor in a short film, which is probably the best moment in the movie and also a real test for Babu's acting skills, in which he excels. And in the same short-film world, you get a glimpse of well-known stars from social media like Viva Harsha, Shanmukh and the latest sensation Darling Das, too, adding an element of reality to it all.

There's also a great blend of emotions. The climax sequence where there's a confrontation between Karthik and his father is a revelation and quite well-sketched, leaving you with a tear or two. The scene showing that it was Meghana's mother (Tulasi) that had gotten Meghana's bike released from mortgage is another touching part of the film showing how deep the bond between the two characters is. In fact, it is these portions that redeem the proceedings after the movie falls flat for a major part in the second half.

Indeed, Naidu has a spark when it comes to writing. Despite having in hand a story that isn't quite exceptional, he manages to deliver a film that is fun for the most part. However, he seems to concentrate more on the screenplay than on the actual story. Thus, while the first half of the movie, as we mentioned, moves ahead like a breeze thanks to all the fun, things start going awry thereafter, with the lovers' tiff and the comedy both getting monotonous. The bigger problem with the film is that it doesn't know where it is going, and is confused about whether it wants to be a romantic comedy or a serious romance. The director does try hard to find that middle ground, but he cannot.

The characters are Nannu Dochukonduvate's big strength - from the assistant in the office to the peon at home, you hardly see anyone that is a waste in the frame, with everyone having a role to play. And the characters are brought to life quite well thanks to a talented cast. Meghana is an uncanny amalgamation of Kalpana in Ghajini and Haasini in Bommarillu. She's lively and innocent, and yet has a sense of maturity about her. Nabha's portrayal of the character is quite a revelation because she seems to bring her own quirks to add verisimilitude to the character.

As for Sudheer Babu, being the producer seems to have given him the freedom to go as far as he wanted to. He dances like never before, has his fill of fights, and has the clichéd climax emotional sequence written to suit him. He plays the part of the bossy manager with ease.

Nassar and Tulasi as the widowed single parents of Karthik and Meghana deliver quite nuanced portrayals. Even though both the actors have played the clichéd mother and father roles several times in their career, the way their characters have been sketched gives them scope to bring freshness to their act. Be it Tulasi emoting a municipal officer who is forever fascinated with an aeroplane or Nassar enacting the untold ache of losing his wife, the actors leave a mark.

In general music can help in a big way to elevate the mood of such films, but Avaneesh, despite scoring some good tunes, doesn't deliver too well on the background score. There's no moment when the music helps set the tone of the film. Even the album is quite ordinary, with Inthe Inthena being the only song that will remain with you after you exit the cinema.

One person that gets brownie points in relation to the film is cinematographer Suresh Ragutu, who delivers top-notch visuals. The film doesn't boast of great locations due to the limited budget it has been made in, but Suresh manages to give it a very rich look on the whole.

Despite its failings, Nannu Dochukonduvate is a fun ride, and should be a good weekend plan if you are okay with films that need you to keep your brains outside and are just enough to pass a boring afternoon.
Share. Save. Connect.
Tweet
NANNU DOCHUKUNDUVATE SNAPSHOT 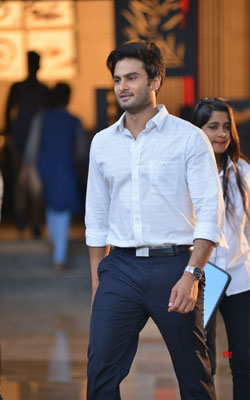 ADVERTISEMENT
This page was tagged for
Nannu Dochukunduvate telugu movie
Nannu Dochukunduvate reviews
release date
Sudheer Babu, Nabha Natesh
theatres list
Follow @fullhyderabad
Follow fullhyd.com on
About Hyderabad
The Hyderabad Community
Improve fullhyd.com
More
Our Other Local Guides
Our other sites
© Copyright 1999-2009 LRR Technologies (Hyderabad), Pvt Ltd. All rights reserved. fullhyd, fullhyderabad, Welcome To The Neighbourhood are trademarks of LRR Technologies (Hyderabad) Pvt Ltd. The textual, graphic, audio and audiovisual material in this site is protected by copyright law. You may not copy, distribute, or use this material except as necessary for your personal, non-commercial use. Any trademarks are the properties of their respective owners. More on Hyderabad, India. Jobs in Hyderabad.