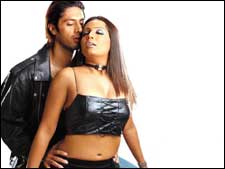 Ghazala Rizvi / fullhyd.com
EDITOR RATING
1.0
Performances
Script
Music/Soundtrack
Visuals
NA
NA
NA
NA
Suggestions
Can watch again
NA
Good for kids
NA
Good for dates
NA
Wait for OTT
NA
In a world infested with violent crime, illicit sex and pirated prints, it's a relief that we can still watch movies in our local theaters and safely enjoy crime, illicit sex and violence. And with movies having names like Fun, Time Pass and Murder, you can build up an anticipation of looking forward to good things in cinema if not in life. More often than not, you are justified. But not with Mashooka.

If you are an average person, you'll be fiddling with several questions about a movie whose maker was brazen enough to christen it Mashooka. Aided by the mammoth presence of Meghna Naidu, these questions would have formulated themselves along the following lines - will Mashooka be fleshy enough? Will it have steam? How many references will be there of the 'S' word? And, above all, how many seconds of the precious footage will be dedicated to the S-activity?

The following lines are dedicated to a serious analysis of such questions, and perhaps on the repercussions that Mashooka is going to have on the psyche of the audiences. And also if Mashooka is going to have audiences. Let's start by giving you the skinny on the story, which, though improbable, was absolutely necessary for showing off Meghna Naidu's substantial assets.

A nice guy (Vicky, Aditya Hal) lives near a bad girl (Sanjana, Meghna Naidu) and gets seduced. Then he gets his serious and good ex (Monica, Vidya Malavade) back, and gets seduced. The bad girl takes her clothes off, takes revenge, and ends in the lock-up. The good guy and his girl have a few more gos under the bed-covers, and sing some songs.

Now that the story is out of the way, let us focus on the issues that really matter, i. e. Meghna Naidu. We can't comment on her clothes, for the simple reason that there are hardly any, but we strongly object to the weight that she carries around. As a spurned mashooka, Sanjana acts like a dense, psycho-pathetically inclined vixen, a character trait which she shows off by shaking her lower jaw and chin every 2-minutes of the movie.

Aditya Hal is definitely model material, one whose posters should be hung in girls' hostels at places from where he can mutely look down upon the rest of the world - keeping a safe distance from the acting arena.

Producer-director Afzal Ahmed took 10 years to decide to return to cinema - a proof of the fact that wrong decisions take an enormous time in the making. His excellence at sewing together odds and ends and presenting a patchy picture helped make Mashooka a 1½ hour movie.

Absolutely uncoordinated editing of scenes, with songs deliberately jettisoned in, makes the 'film' difficult viewing. And the fact that despite the best efforts of Meghna, the love scenes never transpire, doesn't help either.

ADVERTISEMENT
This page was tagged for
Mashooka
Mashuka Hindi Movie
mashooka movie
mashuka movies charecter
Mashooka hindi movie
Follow @fullhyderabad
Follow fullhyd.com on
About Hyderabad
The Hyderabad Community
Improve fullhyd.com
More
Our Other Local Guides
Our other sites
© Copyright 1999-2009 LRR Technologies (Hyderabad), Pvt Ltd. All rights reserved. fullhyd, fullhyderabad, Welcome To The Neighbourhood are trademarks of LRR Technologies (Hyderabad) Pvt Ltd. The textual, graphic, audio and audiovisual material in this site is protected by copyright law. You may not copy, distribute, or use this material except as necessary for your personal, non-commercial use. Any trademarks are the properties of their respective owners. More on Hyderabad, India. Jobs in Hyderabad.