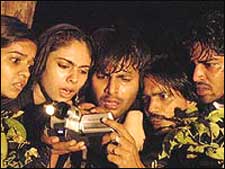 Priyanka Pulla / fullhyd.com
EDITOR RATING
7.5
Performances
Script
Music/Soundtrack
Visuals
NA
NA
NA
NA
Suggestions
Can watch again
NA
Good for kids
NA
Good for dates
NA
Wait for OTT
NA
When you leave the theater, the background score is pounding away in your head – and while you have a beatific smile on your face, all the zip and action of Danger is still spinning full-tilt inside. The pick-up and momentum of the film are so dramatic, it's like jumping off a running train when the movie stops. You are still speeding when you exit.

Perhaps one lesson to be learnt from Danger is that often technical brilliance is all there is to movie-making. This story could have been about a couple of lovers, or a bunch of college-goers, like it is, and the rest of the details could be garbled up completely. Yet, if Krishnavamsi and team kept up the slick editing, the trippy soundtrack, and the freaky, natural light camerawork, it would still have been a ride!

And of course – don't forget the dialogues. They are zingy when they ought to be, and funny next. On the whole, they are perky edge-of-your seat dialogues, that are packed with entertainment, even through those un-noticed moments in the movie. Like the scene where the gang of five kids is lost in the forest, looking for somewhere to moor. Their fumbling around is captured hilariously in the dialogues – even the whispering is not wasted.

Danger is one movie whose most brilliant moments lie completely behind the screen. For technical astuteness, it competes, very hotly, for a place alongside classics like Kshana Kshanam.

As for the story - Lakshmi (Swati), Radhika (Sherin), Ali (Abhishek), Satya (Allari Naresh) and Kartik (Sairam Sankar) are five tight friends. Lakshmi is getting engaged, and the five are grouping together to barge into and join in the fun at her pelli choopulu. Ali is the techical wizard in the group, and gets hold of Kartik's brand new camcorder and starts shooting everything in sight.

The friends decide to go to a private party at Gandipet, the last time before Lakshmi leaves for the States after her marriage. They push off together, boozing in the car and driving at top speed. Along the way, they hit a police car, escape, and witness a child-sacrifice ritual by a politician, all on that same night. And of course, Ali films it all.

And from then on, the troubles break on them like an avalanche.

The movie is about the police, criminals and college-goers, tied up in a complicated chase extending to the outskirts of Hyderabad. Like a knitting needle, they loop in-and-out, over-and-under, criss-and-cross, till you are feeling giddy. Through the forests of Vikarabad, to the hutments in Sanathnagar, and finally to Ravindra Bharathi, the camera moves at 3D, virtual-reality angles, with alternate staccato and zipping rhythms. Meanwhile, the natural lighting (car headlights, torches, bulbs) that Krishnavamsi has insisted on using, gives the sets an eerie, isolated look.

Abhishek, Naresh and Sairam display crackerjack acting skills, while the girls have less of a role in terms of emotional variability. They are hysterical most of the time. Swati in particular, making her much-anticipated debut here, has a role somewhat akin to a single member in a Mexican wave - contributory, but not self-sufficient enough to be judged. Sherin does her "What shit yaar?" impression well, and spouts Telugu swear words with aplomb.

Probably another source of good Karma for this movie will be that after ages, it brings back Brahmanandam in a well-scripted role. As the blank-faced and blank-brained, romper-suited man who has the ill-luck to run into the gang of kids time-and-again, he manages to induce nothing less than guffaws from the audience. It's a small glimpse of his erstwhile brilliance.

On the whole, this movie will give you as much of a kick as 2 hours of dancing at Durgam Cheruvu. It ends in two hours and fifteen minutes flat, before you even think of kicking off your shoes and sinking into the seat. And from horror to fear to comedy, it takes a decent shot at all. That's better entertainment-per-unit-time value than you'll get in a long time. Go for this one for a good rattle and shake this week (and probably many after). It will keep you jiving long after you leave the theater.
Share. Save. Connect.
Tweet
DANGER SNAPSHOT

but is a decent one over all.

ADVERTISEMENT
This page was tagged for
detailsabouttelungumoviedanger
danger telugu movie story
Danger telugu movie
Danger reviews
release date
Follow @fullhyderabad
Follow fullhyd.com on
About Hyderabad
The Hyderabad Community
Improve fullhyd.com
More
Our Other Local Guides
Our other sites
© Copyright 1999-2009 LRR Technologies (Hyderabad), Pvt Ltd. All rights reserved. fullhyd, fullhyderabad, Welcome To The Neighbourhood are trademarks of LRR Technologies (Hyderabad) Pvt Ltd. The textual, graphic, audio and audiovisual material in this site is protected by copyright law. You may not copy, distribute, or use this material except as necessary for your personal, non-commercial use. Any trademarks are the properties of their respective owners. More on Hyderabad, India. Jobs in Hyderabad.