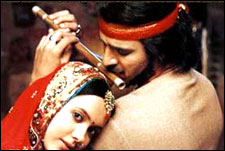 Rohit Murari / fullhyd.com
EDITOR RATING
6.0
Performances
Script
Music/Soundtrack
Visuals
NA
NA
NA
NA
Suggestions
Can watch again
NA
Good for kids
NA
Good for dates
NA
Wait for OTT
NA
If this is what you have been wanting to know, then Kisna is a much much much better movie than Yaadein. Really, it is difficult, even for a master showman, to produce anything worse.

The movie is set in the pre-Independence era. Kisna's (Vivek Oberoi's) family members are help in the house of the British resident Peter Beckett. Beckett's daughter, Katherine (Antonia Bernath), and Kisna are more than friends, much to the chagrin of Lakshmi (Isha Sharvani) who is in love with him.

The characters draw heavily from the Mahabharata. Kisna, of course, is inspired by the Lord himself, Lakshmi by Rukmini, Katherine by Radha, and Bhairav (Amrish Puri in his last appearance) by Kansa. To meet his selfish ends, Bhairav incites hatred against the Beckett family in the peace-loving people of Devprayag. Shankar, Kisna's brother, leads a band of men who kill Peter Beckett, and torch his house.

Katherine and her mother, Jennifer, escape but are separated. Kisna gives Katherine refuge, and, on instructions of his mother, takes it as his dharma to reach Katherine to safety. How he does that is what the movie is basically about. But, a few things need special mentioning.Ghai seems to have been under tremendous pressure after Yaadein. It shows. The effort to make a successful movie is too visible. And there lies the problem. Everything is too grandiose, too larger than life, too much like a stage show. It hinders the unfolding of the story. Post-interval, the movie is like cheese on a slice of pizza - it stretches on and on but never snaps.

It is also a treat to watch in pockets. The songs are only less beautiful than their choreography. Antonia Bernath and Isha Sharvani have put in honest performances, but Vivek Oberoi still thinks he is Chandu of Company. The characterization is a little flawed in that only the warrior Kisna is introduced to us. The poet never makes his appearance felt enough.

But, it is a Subhash Ghai film. If not while watching it, you will appreciate the movie in hindsight.
Share. Save. Connect.
Tweet
KISNA (TELUGU) SNAPSHOT

ADVERTISEMENT
This page was tagged for
Kisna (Telugu) telugu movie
Kisna (Telugu) reviews
release date
Vivek Oberoi, Antonia Bernath
theatres list
Follow @fullhyderabad
Follow fullhyd.com on
About Hyderabad
The Hyderabad Community
Improve fullhyd.com
More
Our Other Local Guides
Our other sites
© Copyright 1999-2009 LRR Technologies (Hyderabad), Pvt Ltd. All rights reserved. fullhyd, fullhyderabad, Welcome To The Neighbourhood are trademarks of LRR Technologies (Hyderabad) Pvt Ltd. The textual, graphic, audio and audiovisual material in this site is protected by copyright law. You may not copy, distribute, or use this material except as necessary for your personal, non-commercial use. Any trademarks are the properties of their respective owners. More on Hyderabad, India. Jobs in Hyderabad.