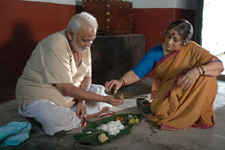 Kritika Deval / fullhyd.com
EDITOR RATING
7.5
Performances
Script
Music/Soundtrack
Visuals
9.0
8.5
8.0
9.0
Suggestions
Can watch again
Yes
Good for kids
Yes
Good for dates
Yes
Wait to rent it
No
Tollywood has earned its reputation of being a fount of brain-dead money-spinners the hard way. After all, it churns out more than 150 films a year with the same macho stalker-ish men with rippling muscles and the manners of a hick, the same milky-white bimbettes who fall for the formers' stalker-ish behaviour because they find it "charming", the same mechanical skin show and "romance", the same randomly hacked off body parts and bizarre fight sequences... And to top it all off, there's always a moral, and always a back-story to make the "hero"'s lack of manners, or morals, acceptable.

And one fine day, when you're utterly convinced that this is pretty much all there is to it, along come movies like Midhunam to remind you what cinema really is. Not a platform for star sons to showcase their non-existent talent, not for people to display all the permutations and combinations of every lame joke in existence, and most certainly not to promote sexual harassment. Just another way to tell you a tale worth telling

Now let's get back to the wonderful movie. As we said, all Midhunam does is narrate a story that many would erroneously assume is simple. After all, how complex can a movie be, when all you see on screen is an old married couple, and one lovely house in small-town Andhra Pradesh? It just goes on to show how wrong many would be, for there is nothing simple about the intricacy in idyllia.

The idyllia we speak of is the joy you derive from a spoonful of piping hot payasam. It is the ecstasy in that first sip of freshly-made filter coffee. It is the confidence drawn from absolute self-sufficiency. More than anything else, it is the comfort of spending the last days of your life in leisure and peace with the one person on the whole planet you want to spend them with. And, it is inhabited by Buchchi (Lakshmi Narayan) and Appadasu (S P Balasubramaniyam).

Exemplify as they do the words "alone together", they are perfectly happy, and if they squabble once or twice about Appadasu's lack of sociability and Buchchi's ex-suitors with names of grapes - well, as Appadasu pithily puts it, daampathyamu, dhappalamu baaga marigithene ruchi.

This is pretty much how the whole movie goes. The highest point of drama is when Savitri's calf dies and Appadasu and Savitri conduct a funeral for it. But the poetry in the prosaic has rarely ever been as much in evidence as in this film.

Mithunam makes you feel a lot of things; mirthful, contemplative, refreshed, and, somewhere, a tad envious, too. For, the lead couple are done with the first bit of life, the business end, where you struggle to pay bills and work and save and bring up children. All they have to do now is live life the way it was meant to be. And you of the 21st century - with the smartphones, the fat pay-checks, the 24x7 jobs and the Rs.150 seats from which you are watching this movie - are probably never going to see that life.

A lot of the credit for the film goes to the screenplay and the loving camera work. Drops of coffee squeezing their way out of a traditional steel filter have never looked so inviting, nor has the act of making coconut chutney, so joyful.

However, when there are only two characters in a movie, they need to be played to perfection. And boy do SPB and Lakshmi do their job well. So what if they're both old? SPB doesn't let his love handles get in the way of romancing his wife, and Lakshmi is absolutely ravishing.

Tanikella Bharani's love for the Telugu language is conspicuous in every word uttered in the movie, whether it be the cleverly wrought dialogues that draw chuckles every time they intend to, or the ingenuous lyrics that blend into the screenplay seamlessly.

One song, for instance, goes "avakaya mana andharidi, gongura kuda manadele...", a play on a famous song from the 1955 film Missamma with the lyrics "brundavanamadi andharidi, govindudu andharivadele...". This is just one example of how Bharani skillfully wields the Telugu language, literature and popular culture to give you a script that is as amusing as it is efficient.

And if the movie does drag a bit towards the end, it is more like the soporifia from a soothing lullaby rather than the tedium induced by everything mentioned in the first paragraph.

Calling Midhunam a movie for senior citizens would be like calling Barfi a movie for the differently-abled, or The Hobbit a movie for, well, hobbits. It is that rare Telugu movie that you can actually recommend to your family. So, take them all to watch it, and rediscover the raison d'etre of cinema.
Share. Save. Connect.
Tweet
MIDHUNAM SNAPSHOT 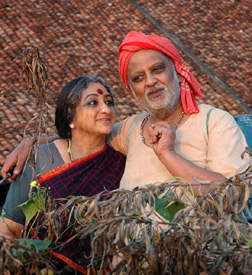 See Midhunam full details
TOP COMMENT
chaitanya on 22nd Dec 2012, 2:06pm | Permalink
movie is awesome..had check it out yesterday as i had nothing to do..this ia bad..no publicity for such a gem of a movie and except for full hyd no other website even mentioned abt it.

shame!
5
0
MIDHUNAM USER REVIEWS
1 - 15 OF 20 COMMENTS  |  NEXT  |  LAST
POSITIVE  |  NEGATIVE |  NEWEST  |  OLDEST  |  MOST HELPFUL  |  LEAST HELPFUL
USER RATING
9.0
2 USERS
Performances
Script
Music/Soundtrack
Visuals
9.0
7.0
10.0
10.0
Can watch again - Yes
Good for kids - Yes
Good for dates - Yes
Wait to rent it - No
Raghu on 8th Jun 2020, 8:16am | Permalink
Nice movie
RD on 24th Apr 2017, 1:41pm | Permalink
i think the movie was directed to give a message to the ones who are staying abroad and leaving their parents at home. Now sure really, who is wrong and who is correct. Children should come back home and stay with parents or ....It is really a great movie, and touches hearts., but the the motto is really not able to understand, whether children are wrong as they are working abroad?? SPB and Tanikella to answer.
Ram Gopal Verma on 21st Oct 2015, 12:40am | Permalink
V boring movie of my life. This Mithunam can't hold a candle to my ice-cream!
Srinivas on 14th Aug 2013, 4:27pm | Permalink
What a movie, I was delighted after a long time, initially I was so spectacle about the movie but while watching make you so positive. Great movie, I recommend..
Gunturi Nageswara Rao on 13th Aug 2013, 7:33pm | Permalink
A great movie and every senior citizen can see his life reflected in some of the scenes of the movie and it touched the hearts. Hats off to Tanikella Bharani for his attempt but unfortunately our people donot have heart to encourage such films. I pity and I have seen four times.
Indra on 30th Apr 2013, 8:14am | Permalink
It is reminding me the customs followed in old Brahmins houses in old times especially food preparation and language.

It is a great movie, once again Bharani proved he has exemplory dialogue writing skills.
Movis is simply superb
venkat on 30th Apr 2013, 2:41am | Permalink
no words to say about this movie....i have been very emotional while watching this film..great salute to tanikella bharani sir
ram on 15th Apr 2013, 5:50am | Permalink
best movie of the year..

Could you tell me where did u watch this movie. I couldn't find it screening in any of the theaters in HYD.

ADVERTISEMENT
This page was tagged for
Midhunam Movie Review {3.5
midhunam movie story
can I spinners telugu full movies
Midhunam telugu movie
Midhunam reviews
Follow @fullhyderabad
Follow fullhyd.com on
About Hyderabad
The Hyderabad Community
Improve fullhyd.com
More
Our Other Local Guides
Our other sites
© Copyright 1999-2009 LRR Technologies (Hyderabad), Pvt Ltd. All rights reserved. fullhyd, fullhyderabad, Welcome To The Neighbourhood are trademarks of LRR Technologies (Hyderabad) Pvt Ltd. The textual, graphic, audio and audiovisual material in this site is protected by copyright law. You may not copy, distribute, or use this material except as necessary for your personal, non-commercial use. Any trademarks are the properties of their respective owners. More on Hyderabad, India. Jobs in Hyderabad.