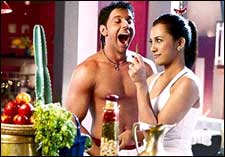 Krishna KBS / fullhyd.com
EDITOR RATING
2.0
Performances
Script
Music/Soundtrack
Visuals
5.0
3.0
7.0
6.0
Suggestions
Can watch again
No
Good for kids
No
Good for dates
Yes
Wait to rent it
No
Khushboo seems to be inspired by the Hollywood flick A Walk In The Clouds. Now, getting inspired by this film has not really worked for Bollywood. Abhishek Bachchan's terrible Dhai Akshar Prem Ke comes immediately to mind when we think of films inspired by A Walk In The Clouds. Probably Indian audiences cannot digest the idea of a girl claiming that she is pregnant before marriage.

Whatever be the case, more often than not these 'inspired' films took a beating at the box-office. And Khushboo is soon going to join the list.

Raghu Iyer (Rishi Rehan) is an ambitious young Tamilian, who craves to go to the US. However, he is coerced to take up an assignment in Chandigarh before he is posted as the Vice President of his company in New York.

Raghu hates the idea, but he soon gets attracted to a nameless stranger in Chandigarh. A weird twist in the plot results in his spending the night with the girl, and, as often happens in the movies, she ends up getting pregnant.

The nameless girl then reveals that she is Pinky, and that she desires to give birth, and asks Raghu to meet her very Punjabi family. She comes up with some convoluted logic that she could then pass on the blame to Raghu when she becomes a mother, and as Raghu is a stranger to her family, it would not matter a jot.

Raghu agrees to this hare-brained idea. On meeting her family, and seeing her in her surroundings, Raghu realizes that it is love and not just lust that he has for her. He convinces her to marry him, and the problems aggravate - not just for the young couple, but also for the audience.

Cultural differences abound, and worse, Pinky does not comprehend Raghu's desire for a career. After a lousy second half, which drags interminably, the movie climaxes with a breakup. Do they reconcile? Well, if you have not ever watched a Bollywood film, you might need to visit the theatre to find an answer.

It is not just that the movie is bad, but also that the screenplay is so confused that the message it hopes to convey is lost in a load of mush. The director confuses conflict for plot, and harps on the differences of the two cultures, and the divergent viewpoints on career. As for the acting, the debutantes perform credibly - with Avantika having the looks to make it big, too. Ninad Kamat, as the hero's friend, is adequate. Of the others, the veteran actor Prem Chopra deserves a mention, for making his presence felt.

The film is shot in beautiful locales, and an in-form Adnan Sami makes you groove to the catchy tunes. This movie is contrary to the adage that songs are cigarette breaks. In fact, you feel like walking out of the theatre when a song is not playing.

Khushboo is like a beautifully picturized music video that tempted the producer to weave a full story around the songs, with disastrous results. Give it a resounding miss.

ADVERTISEMENT
This page was tagged for
Khushboo hindi movie
Khushboo reviews
release date
Rishi Rehan, Avantika
theatres list
Follow @fullhyderabad
Follow fullhyd.com on
About Hyderabad
The Hyderabad Community
Improve fullhyd.com
More
Our Other Local Guides
Our other sites
© Copyright 1999-2009 LRR Technologies (Hyderabad), Pvt Ltd. All rights reserved. fullhyd, fullhyderabad, Welcome To The Neighbourhood are trademarks of LRR Technologies (Hyderabad) Pvt Ltd. The textual, graphic, audio and audiovisual material in this site is protected by copyright law. You may not copy, distribute, or use this material except as necessary for your personal, non-commercial use. Any trademarks are the properties of their respective owners. More on Hyderabad, India. Jobs in Hyderabad.