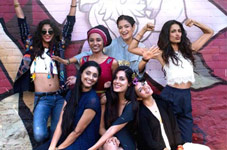 Josh / fullhyd.com
EDITOR RATING
7.0
Performances
Script
Music/Soundtrack
Visuals
7.0
8.0
7.0
8.0
Suggestions
Can watch again
Yes
Good for kids
No
Good for dates
No
Wait to rent it
No
Confession time. This reviewer walked into the theatre with cold feet. Jittery about being a man who's to review the first Indian female buddy film (at least that's what they marketed it as). Hell, look at the name - Angry Indian Goddesses. The immense likelihood of this being copious amounts of male-bashing parceled as feminism, and further, the rife possibility of it being ineptly made, loomed large in the mind. And boy, were we wrong!

Angry Indian Goddesses is a smashingly good film. Director Pan Nalin (it's a he - we didn't know that until after the film got over) makes a film on feminism which is both artistically pleasing and significant in context. And the feminism in this film is among the best kinds of feminism. We'll get to that later.

The film follows Frieda (a radiant Sarah-Jane Dias) and her friends whom she invites to Goa for her wedding. The friends are a sundry lot. Some of them take their time to warm up to the others but they all bond eventually, and these interactions make up most of the film. It is, however, the backgrounds that set the tone of the movie.

The musician "Mad" Madhureeta (Anushka Manchanda), for instance, is desperate to release her album but with little success. On top of that, she has to put up with stage shows where she's pestered to sing "Beedi Jalai le". Life's no better for the Anglo-Indian "Jo" Joanna (Amrit Maghera) who is determined to make it in Bollywood but just can't assimilate the ethos of the industry.

Or take "Pammi" Pamela (Pavleen Gujral), who was a gold medalist in college but unrealisingly slips into the role of a standard issue Delhi housewife. Worse, take the corporate honcho "Su" Suranjana (Sandhya Mridul) who is smoking her lungs out dealing with the stresses of running a factory but is nonetheless expected by her husband to be the sole caretaker of their daughter - because it's the mother's job, of course.

The women all do some really good work with the roles given to them (although Tannishtha Chatterjee's role was almost fully chopped off by the censors). The biggest win, perhaps, is that we manage to feel like a part of this motley crowd. We begin to look at them as our friends, which is what truly validates a buddy film - you laugh with them, and if you are made of soft mushy material like this reviewer, you might find yourself wiping off a tear or two.

And it is a fact that the writing lets the actors achieve this. It is tremendously difficult to outline seven equally important characters, flesh them out, and still manage to narrate a single story. The (mildly flawed) script makes for many lovely interactions which furnish the ebbs and flows in the story, but it succeeds best at taking these individual scenes and stringing them together into a single alive narrative.

Among the best of these scenes is one where Frieda reaches out to her maid (a wonderfully feisty Rajshri Deshpande - and yes, the maid is a friend, too) after a squabble between them. There is not a single word in the whole scene but the way Deshpande and Dias negotiate the patch up and grasp each other's hands towards the end is just beautiful. Forgiveness makes for some of the most humane cinematic moments (remember the mast hakka noodle in the second Munnabhai film?), and this scene over here is practically the chicken soup your soul needs when you are missing that friend you quarreled with.

The ladies, along with Goa, all look gorgeous in the dim-lit frames by Swapnil Sonawane. Apart from beautiful visuals, you also get to appreciate how some scenes are shot - like when the women are on a beach in the dark with nothing but torch lights. These portions also benefit from some really good editing. The score by Cyril Morin is often soothing, and the use of Ram Sampath's Coke Studio track "Kattey" for the title credits is a brilliant touch.

We commented on how the feminism in Angry Indian Goddesses is among the best kinds of feminism. We could quote Mr. King on this: "We must learn to live together as brothers or perish together as fools." There. Any struggle for equality behooves the belief in equality. To act like all men are practically Satan's rectal expulsions betrays a very basic disregard to equality.

Angry Indian Goddesses has a lot of anger in it but this anger is directed towards the attitudes held by people and not men as an entire group. Misogyny and patriarchy are discussed and denounced, and the film is very effective in sensitising you to the daily battles of women. This sensitization is perhaps what the Indian man needs to be given, not entitlement nor hate. Love and reason can make one empathise, you know.
Share. Save. Connect.
Tweet
ANGRY INDIAN GODDESSES SNAPSHOT 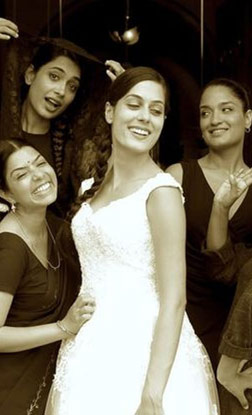 ADVERTISEMENT
This page was tagged for
Angry Indian Goddesses hindi movie
Angry Indian Goddesses reviews
release date
Sandhya Mridul, Tannishtha Chatterjee
theatres list
Follow @fullhyderabad
Follow fullhyd.com on
About Hyderabad
The Hyderabad Community
Improve fullhyd.com
More
Our Other Local Guides
Our other sites
© Copyright 1999-2009 LRR Technologies (Hyderabad), Pvt Ltd. All rights reserved. fullhyd, fullhyderabad, Welcome To The Neighbourhood are trademarks of LRR Technologies (Hyderabad) Pvt Ltd. The textual, graphic, audio and audiovisual material in this site is protected by copyright law. You may not copy, distribute, or use this material except as necessary for your personal, non-commercial use. Any trademarks are the properties of their respective owners. More on Hyderabad, India. Jobs in Hyderabad.