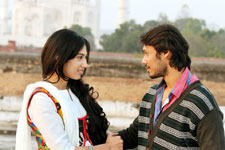 Nupur Barua / fullhyd.com
EDITOR RATING
5.0
Performances
Script
Music/Soundtrack
Visuals
6.0
5.0
6.0
7.0
Suggestions
Can watch again
Yes
Good for kids
No
Good for dates
Yes
Wait to rent it
No
Love stories never go out of fashion, especially in the world of Hindi cinema. And what good is a love story unless there are plenty of obstacles that make it near-impossible for eternal lovers to meet? Raj Purohit, director of Sixteen, the very urban coming-of-age story, now does an about turn and goes rustic, almost, with Jigariyaa.

Shyamlal, a.k.a. Shamu (Harshvardhan Deo), is the no-good son of an exasperated Ramlal (Virendra Saxena), a halwai, or sweetmeat vendor. The place is Agra, and Ramlal is justifiably proud of his reputation - a business that began with his grandfather. However, Shamu is only interested in spouting poetry and not in the business, and he somehow has not managed to graduate yet.

Radhika, a.k.a. Radha (Cherry Mardia), is the daughter of affluent parents (K K Raina and Navni Parihar), and lives in Mathura. She is in Agra, visiting her maternal grandmother (Vinita Malik), and this is where Shamu sees her. It is love at first sight, for him at least. He tries to worm his way into her heart, and not surprisingly, it is his poetry that finally wins her over. The two lovers slowly get into a relationship, but then the grandmother finds out, and sends Radha back to her own house.

Given that Mathura and Agra are not too far from each other, Shamu commutes every day and continues to meet her on the sly, when she is supposed to be in college. Eventually, because her parents want her to marry somebody else, the lovers elope to Mumbai, and take the help of Shamu's childhood friend, Brij (Ketan Singh), to make a life for themselves.

Will the furious parents of the girl catch up with them? Will they marry? Will they live happily ever after, or is this another Romeo-Juliet of sorts? To find out, you will have to sit through the slow and long rendition.

Not that Jigariyaa does not have its moments. In fact, the idea of an "innocent" love story is pretty well-executed. Here are two people, who have never had to fend for themselves, nor ever had any strong beliefs. They just exist. They are not hero material, but ordinary young people who are naive in many ways of the world. Even when they fall in love, they do not learn how to manipulate each other, nor do they make demands on each other. In fact, they do not even fight, because they are in love and nothing else matters.

Refreshingly, the story makes no strong comments, nor does it take a stand on what love should be. Reportedly based on true events, the plot is not complicated. It is the story of thousands of young people in this country, who are not given a choice of life partner, because issues such as caste and wealth differences come into the picture. The plot just flows from one point to another, and the only dramatic point is when you know that they cannot hide in Mumbai forever.

Unfortunately, the pace is slow, and repetitive. Nothing much happens in the dull lives of these two lovers, and in some way, you guess that it is a realistic portrayal of romance in small towns. Of course, there is the poetry, and there is the Taj Mahal in the backdrop, and those contribute to some interesting situations. The flow is sometimes jarring because the time lapses between scenes, or even cities, can get confusing. The dialogues are normal, for the most part, and sometimes filmy, too. Thankfully, the humour, even if in small doses, is not very OTT, but more everyday comedy.

Harshvardhan Deo is obviously influenced by Dhanush's character in Ranjhanaa. He seems sincere, but Dhanush's act is still too fresh in our minds to not be irritated with what seems to be obvious emulation. Cherry Mardia is perfect for the role of Radha, a little self-involved and dreamy, and wide-eyed in love. Both the actors are a little awkward in their respective roles, and that only adds to the credibility of their characters.

Virendra Saxena and K K Raina are bang on as the disappointed fathers of the lovers. Navni Parihar is convincing, but seems a little erratic. Natasha Rastogi is wasted. The unexpected star is Ketan Singh, who is confident and endearing at the same time. Vinita Malik's character is not very well-written.

The production design pays a lot of attention to the fact that the story is set largely in Agra and Mathura. From shops to houses and the cars that roam the narrow lanes - all seem natural. Ditto for the costumes, and nothing looks out of place. Mumbai, on the other hand, is not paid much attention to in these two departments.

The music is better than most soundtracks we hear these days. It has a North-Indian flavour (not Punjabi), and that suits the environment the story is set in. The camera work is very striking in some parts, especially in the repetition of motifs such as the train, the station, the bridge, the lanes etc. The editing could have been crisper.

Jigariyaa does not offer anything new, and nor does it make tall claims to change the way you look at either love or society. It is a normal movie for normal people, and may just find resonance amongst many young lovers. It is worth a watch, if you are not too cynical yet to believe that love can be just that - love.
Share. Save. Connect.
Tweet
JIGARIYAA SNAPSHOT 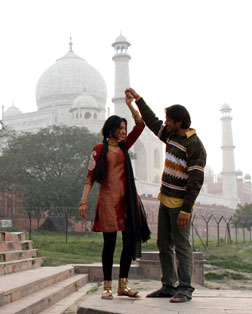 ADVERTISEMENT
This page was tagged for
Jigariyaa hindi movie
Jigariyaa reviews
release date
Harshvardhan Deo, Cherry Mardia
theatres list
Follow @fullhyderabad
Follow fullhyd.com on
About Hyderabad
The Hyderabad Community
Improve fullhyd.com
More
Our Other Local Guides
Our other sites
© Copyright 1999-2009 LRR Technologies (Hyderabad), Pvt Ltd. All rights reserved. fullhyd, fullhyderabad, Welcome To The Neighbourhood are trademarks of LRR Technologies (Hyderabad) Pvt Ltd. The textual, graphic, audio and audiovisual material in this site is protected by copyright law. You may not copy, distribute, or use this material except as necessary for your personal, non-commercial use. Any trademarks are the properties of their respective owners. More on Hyderabad, India. Jobs in Hyderabad.