So much violence that I can make you ill

So much gore that you'll take a pill

So much blood that it will test your will 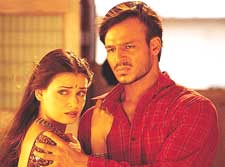 This very original rhyme has been inspired by Ba Ba black sheep just the way Dum has been by Telugu's Sriram, Tamil's Dhill and Hindi's Arjun. Dum is a transliteration of Telugu's very own Sriram, the only difference being Hanuman Chalisa in Dum as against the Anjaneya Strotram in Sriram.

Since remakes are nothing new and since only directors like Ramgopal Varma and his protégé E Niwas dare to be different and hat ke, we are not dismissing Dum right away. But that's not saying the stabs, the jabs, that blood and raw flesh shown on the screen every two minutes is justified. From the first frame to the last, Dum is a bloody-steady-go movie. Silence, it's the turn of violence now.

Uday (Vivek Oberoi) is an aspiring police inspector who can't let anything or anybody come between him and his dream of donning the khakhi. His passion for the same becomes clear after a high-testosterone, macho-heavy rock number complete with props like stud bullets, leather jackets and army trousers. But his romantic side comes to the fore when he meets a Kulfi-making TV anchor (Diya Mirza).

A drunk and sadistic cop, Inspector 'Encounter' Shanker (Atul Kulkarni), spoils the romantic scene between Mr Kool and Ms Kulfi while the couple is having a good time at the beach. Uday flares up and bashes up the irresponsible cop for upsetting his ladylove.

The mentally-ill cop swears revenge and thus begins the tooth-for-tooth and nail-for-nail game. Shanker is out to finish off Uday and his budding dream of being a cop. On the other hand, Uday wants to clear Shanker from his way, both for professional and personal reasons.

The ensuing confrontation ensures lots of fisticuffs, actions, stunts etc. Uday's sister, his harried parents, a bunch of faithful friends and a loving girlfriend act as props to the story which ensures that Uday kills Shankar and settles scores.

The best scenes of Dum are when there is no violence but just a battle of wits. The audience applause was clear when Uday outsmarts Shanker merely by using his brains and not fisticuffs. The low-blow scene/song is positively the jhatka number by Yana Gupta. Even the frontbenchers will find this number (can't remember a single word of this so-called song) extremely repulsive.

There are just about two other numbers and no romantic duets unlike in the Telugu and Tamil versions. Vivek Oberoi fits the role of the angry, young, enthu guy to the T. Needless to say, he shines. Lookswise, he would look better if he chopped off those locks on this forehead and washed his face more often. Is it just me, or are greasy, grimy faces the 'in' thing?

Diya Mirza settles for a 'something is better than nothing' role here. But since it's the good guy's show all the way, the good girl does not have much to do. Atul Kulkarni looks wicked and carries off his role with aplomb, but Ashish Vidyarthi in Sriram is leagues ahead of him. The harried Dad, oversweet little sister and good Mom all look like the actors have been custom-made for the movie. Sushanto as Uday's friend does a good job too.

ADVERTISEMENT
This page was tagged for
Dum movie
Dum Hindi movie
Dum hindi movie
Dum reviews
release date
Follow @fullhyderabad
Follow fullhyd.com on
About Hyderabad
The Hyderabad Community
Improve fullhyd.com
More
Our Other Local Guides
Our other sites
© Copyright 1999-2009 LRR Technologies (Hyderabad), Pvt Ltd. All rights reserved. fullhyd, fullhyderabad, Welcome To The Neighbourhood are trademarks of LRR Technologies (Hyderabad) Pvt Ltd. The textual, graphic, audio and audiovisual material in this site is protected by copyright law. You may not copy, distribute, or use this material except as necessary for your personal, non-commercial use. Any trademarks are the properties of their respective owners. More on Hyderabad, India. Jobs in Hyderabad.