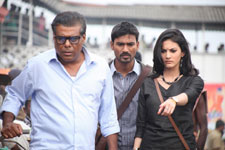 Kritika Deval / fullhyd.com
EDITOR RATING
6.0
Performances
Script
Music/Soundtrack
Visuals
6.5
5.0
6.0
6.5
Suggestions
Can watch again
No
Good for kids
No
Good for dates
Yes
Wait to rent it
No
Firstly, we'd like to start with how stoked we are to see a leading lady (Amyra Dastur) in a South-Indian film play a character with a career that is actually relevant to the plot. It's even better that this happens in a movie that is clearly for a mass audience.

Secondly, "See how gay this gay person is!" is a tired punchline, y'all! Give it a rest already. Literally.

Now that we've gotten that off of our chests, the movie itself. Anekudu is just a bag full of fun on a lot of levels. Madhu is the creative head at a company that makes video games, and is super into past-life regression. She holds crystal clear images of a lover who has been torn from her again and again over at least two generations.

Enter Ashwin (Dhanush), who happens to be that image. A new entrant to her company, Ashwin is bewildered and annoyed by Madhu's insistence that the two are meant to be in love. And, off we go on a journey to consolidate over six decades of experience.

Sure, we've done the whole past-life thing quite a few times, but what's exciting about Anekudu is how its makers own all of that camp and the cheese that comes along with the plot. So, the first blast of the past involves Dhanush the laborer and Amyra the General's daughter in a 1962 mid-coup Burma, and the second in 1987, with Dhanush the rowdy and Amyra the brahmin's daughter.

This blight of crossing stars seems to have let up a bit in the present, but where is the fun in that? And so we that the evil CEO of the company (Karthik) who also has generation-spanning evil intentions.

Anekudi's strength lies not in any depth of ideas, but in the illusion of depth that is knit into the film via a skillful screenplay. Director/writer K V Anand throws a lot of ideas into the pot, and somehow comes up with a dish where details, while purely ornamental, are so good at their job that they almost feel functional.

The Burma flashback, for instance, set as it is in the downfall of the Republic of Burma, is followed by a present day scene of Madhu lying on a couch in a her room, with a poster past Madhu's classmate Aung San Suu Kyi on the wall. Bits and pieces of actual history of this sort pepper the whole film, not because they are relevant, but because they add just a little bit of authenticity to an utterly outlandish plot.

The camera work is a thing of beauty, making full use of a theme of repetition in an almost hypnotic way. As a matter of fact, all of Anekudu is beautifully shot, with wonderfully melded scenes giving you little time to ponder over the inevitable plot inconsistencies, as well as the fact that the story loses quite a bit of steam over the second half, with a climax that is as close to a dud as possible without actually being one.

Dhanush wears all of his roles lightly, and delivers a supremely confident performance. Amyra Dastur is enchanting to watch, and has fun with all of her incarnations, but especially with the sassy, ever-so-slightly batty Madhu. Karthik, Ashish Vidyarthi and the rest of the cast deliver well, and complement their roles. The music is catchy and the songs are shot well.

At the end of it all, Anekudu is a fun enough watch if you have time to kill. There's enough Tamilian weirdness to put off a subset of Telugu filmgoers, but if that isn't a barrier for you, you won't regret watching this one.
Share. Save. Connect.
Tweet
ANEKUDU SNAPSHOT 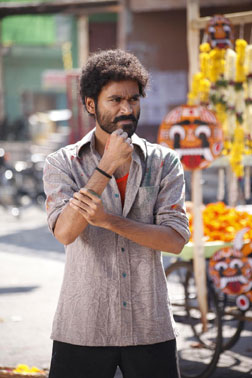 ADVERTISEMENT
This page was tagged for
Anekudu telugu movie
Anekudu reviews
release date
Dhanush, Amyra Dastur
theatres list
Follow @fullhyderabad
Follow fullhyd.com on
About Hyderabad
The Hyderabad Community
Improve fullhyd.com
More
Our Other Local Guides
Our other sites
© Copyright 1999-2009 LRR Technologies (Hyderabad), Pvt Ltd. All rights reserved. fullhyd, fullhyderabad, Welcome To The Neighbourhood are trademarks of LRR Technologies (Hyderabad) Pvt Ltd. The textual, graphic, audio and audiovisual material in this site is protected by copyright law. You may not copy, distribute, or use this material except as necessary for your personal, non-commercial use. Any trademarks are the properties of their respective owners. More on Hyderabad, India. Jobs in Hyderabad.